Does anyone know how Ingo Maurer pulled off his LED table. It has no visible wires connecting each LED yet they all light up. I would love to find out. I can’t find any info on the production or manufacture on the web.
Here is the link to a picture of it
http://www.unicahome.com/catalog/item.asp?id=14676

My guess would be that it uses some very fine wires embedded in the glass to get power to the LEDs.

One could also use electromagnetic induction if each LED contained a closed circuit and a small coil of wire, with the transformer powering an antenna of sorts. At such a close range, along with the very low power requirements of LEDs, it might just work, similar to Nicola Tesla’s wireless power transmission ideas

one possibility, although I doubt this is how it was made is this: http://www.iof.fraunhofer.de/departments/optical-coatings/plastics/index_e.html

Liquid crystals are also transparent conductors, so that’s another possibility.
( so is salted water… transparent and conductive

meaning there are a number of ways how that is achievable, but I have no idea. hope someone here knows the definite real answer.

I just checked out the website regarding the optically transparent highly conductive material. Sounds incredible. applied through vapor coating??!(spray gun?)
So interesting. This could explain why its soooo expensive.

The tesla theory is intriguing as well. They use that technology on rechargable toothbrushes now. Crack open an Oral B and voila.

73lotus is right about it being thin wires, about 1/2 the thickness of a human hair.

I’ve seen the table version in his gallery in NY.

The LEDs themselves are small enough that, if the table was off, you
wouldn’t notice them without closer inspection.

Its not exactly the fine wires I was thinking of, but I’m glad to see it is using modern technology over the older ideas that I posted originally (even Tesla’s power transmission ideas are over 100 years old now).

In fact, I’ve been trying to figure out how I can utilize something similar to conductive film for an LED lamp.

yeah the company is called glas-platz. i met with them a couple of years ago. they mentioned that ingos input to that table was minimal, apart from some dimensions.

there are no wires, it is a conductive transparent coating. it is a complex map of positive and negetive paths. the lengths of these paths have to be excatly the same, otherwise the l.e.ds vary in brightness. the expense comes from working out these path maps.

There I was, sitting on the sofa, sipping a little Johnny Walker (Black, neat), watching The Science Channel, and what to my wondering eyes does appear, but Mssr. Mauerer’s table (and a bunch of other much more interesting applications) of OLEDs: Organic Light Emitting Diodes … with a detailed explanation of how they are manufactured.

Also note that the feature appears in the second half of the program. 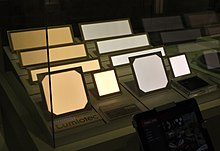 An organic light-emitting diode (OLED or organic LED), also known as organic electroluminescent (organic EL) diode, is a light-emitting diode (LED) in which the emissive electroluminescent layer is a film of organic compound that emits light in response to an electric current. This organic layer is situated between two electrodes; typically, at least one of these electrodes is transparent. OLEDs are used to create digital displays in devices such as television screens, computer monitors, an The...

make sure you read this one: 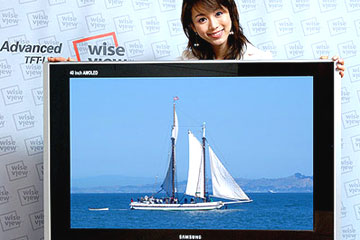 Imagine a TV that is 80 inches wide and less than a quarter-inch thick, consumes less power than most TVs you can buy today and can be rolled up when you're not using it. OLEDs can make it happen. Find out how.

Thecompany: “LEDs in GLASS”, makes tables with random patterns of lights as well as other applications with LEDs in glass. There are no wires between the LEDs, just points of light. The LEDs are laminated in between the sheets of glass.

Your spam would be forgiven if your domain actually contained a website. All I get is an “under construction” page- why’d you even bother posting? I would be interested in more information though.