I’m trying to decide if an industrial design degree is right for me. Here are some thoughts on this:

Thanks for your comments on these thoughts and questions.

ID is much, much more than drawing. Based of what you’re saying, I think concept art and entertainment design is your best bet. (http://conceptart.org). HOWEVER, it will not be all traditional (although there are times where it is), and it is imperative that all designers learn a digital workflow (whether or not they end up using it is based on where they work).

Then again, maybe there is a market for technical drafting by hand… I just don’t know it

If you love to draw, you should think about attending a fine arts program, and having that be your thing. It could be fresh and interesting to see someone who is really into traditional drafting techniques hone those skills and apply them to some conceptual work.

I’m thinking maybe Illustration is the path for you - but maybe add in a few ID Drawing & Rendering classes as well to learn some of the tricks and techniques that ID majors use. But you really should also learn some digital processes as well - not necessarily 3D CAD, but maybe Painter / Illustrator /Photoshop etc could prove to be very beneficial to you.

Welcome to the core boards. This is a great starting point and asking the questions you are asking is a good first step.

In Design, sketching and drawing is very important, but it is also a means to an end. That is, sketching is a way to create, develop and communicate your ideas.

How old are you? I ask because I know many designers (including myself) started down the path to design much as you did when we were younger, then found that drawing was fun not only in and of itself, but as a way to put onto paper our ideas. Perhaps this is the direction you are going?

Illustration and concept design could be a path for you, but so could design.

I’d second the idea however that no matter what (perhaps except fine art), looking at and exploring all different kinds of media would be a good idea.

Good advice especially from R. When I was 13 I told my parents “I want to draw stuff from the future.” in response to them asking ms what I wanted to do when I grow up. I think whether product design is for you or not depends on this question. When you draw, do you want to improve things, make them better, take into account who will use them, how they work, how they relate to culture? Or do you just want to draw another space ship, another car, and so on.

If you are in the first group, design might be a good fit. If not, illustration might be better, but there you will run into the kinds of functional problems illustrators deal with, conveying an existing story (book cover, editorial illustration, possible animation character development… Though that is more entertainments design now)

Keep readin and posting in the forums, and you will gets feel if productdesign is a match for you. I certainly fall more on the drawing side of the spectrum, but I understand that my sketch is only a temporal vessel for my idea. It is the physical thing that matters to me.

Thanks for the prompt and helpful replies–and the pointed questions. I’ll answer those now. I’m 44, maybe too old to be considered for the hot design jobs. But I’m not thinking about jobs; I’m thinking just of getting the drawing skill you guys have.

Michael, you asked if I wanted to learn ID to improve products, or just draw (space ships, etc.). I’d say “just draw” – but draw really well. I think I’ll enjoy learning other, non-drawing aspects of ID (I do love CAD), but my focus is on learning to draw like you guys do, as I mentioned before.

As for fine arts, I’m in a fine arts program now. I just finished Design I and Drawing I, and I’m heading toward an illustration degree. Although illustration appeals to me, the approach ID folks use to draw is exactly how I like to draw.

I’ll restate my original question: are industrial designers the best freehand draftsmen? If they’re not, who are?

Assuming you mean draftsmen as in the technical drawing for production sense, I don’t think anyone is, all of the freehand draftsmen I know are about 2 years from retirement, and don’t do it anymore.

Freehand drafting has passed along down the road. But I would say an architect would be a better draftsman than an industrial designer, because drafting is included in the training of many architects while it is probably less included in the training of an industrial designer. I think you used to be able to be a draftsman independent of being a designer. And I know that in engineering, you don’t start as a drafter and work your way up to engineer, you start as a drafter and, barring your reentry to an engineering school, you move on to mechanical designer and so on.

ID is kind of a strange duck, drawingwise…

While sketching is definitely a creative activity, the thing that defines ID sketching, as opposed to say figure drawing, is that while an ID sketch can/should have expressive content to help convey an idea, the ID sketch is also usually very representational of a thing that exists in space. Within this constraint, perspective rules - at some point the thing has to look like what it is. Other types of drawing tend to be much less tethered to this particular constraint. That doesn’t mean we are talking about lesser draftsman outside ID. Charley Harper is a great example. His illustration work was often geometric abstraction of representational subjects, but his linework and visual organization skills were razor sharp. It is more than clear that he deliberately placed every line exactly as he wanted it placed in his work. Adrian Tomine and Chris Ware are other great examples of fabulous draftsman from far outside the ID world. I don’t think IDers have anything close to a monopoly on draftsmanship.

Thanks for sharing your experience, and your observations and hunches. I’m not convinced 100% either way on the question of industrial designers being top freehand draftsmen. What I’m looking at is the many gorgeous freehand drawings I’ve seen in these discussion forums. And I’m looking at the freehand work of guys like Doug Chiang, who was Design Director for at least one of the later Star Wars films. He got a degree in ID. Another ID’er who draws great freehand: Scott Robertson. When I look at those drawings, and read books like Rapid Viz, I get the strong feeling that industrial designers can draw anything freehand. Is this feeling unjustified?

Yes and no. Some ID’s are great sketchers and illustrators but there are others that are average or mediocre at best. It depends on your workflow and process. For example, some people do thumbnails and then move straight into a 3D modeling program. The over the top, super-tight, full-color renderings are found more in the automotive field now than in product. As for programs and schools, I believe that you have answered your own question. Both Doug Chiang and Scott Robertson studied design (trans I think?) at Art Center. If I were you, I would look into a design degree at a place like Art Center or CCS. You can get a general degree in product or trans or entertainment and take other classes to complement your illustration interest.

Also, I think you should realize that you don’t have to go to a great school to be a great illustrator. The structure and resources may help you get there faster, but if you put in a lot of time and effort and take advantage of the vast amount of learning resources available online and elsewhere, its possible to do it on your own.

FYI, this link may interest you: 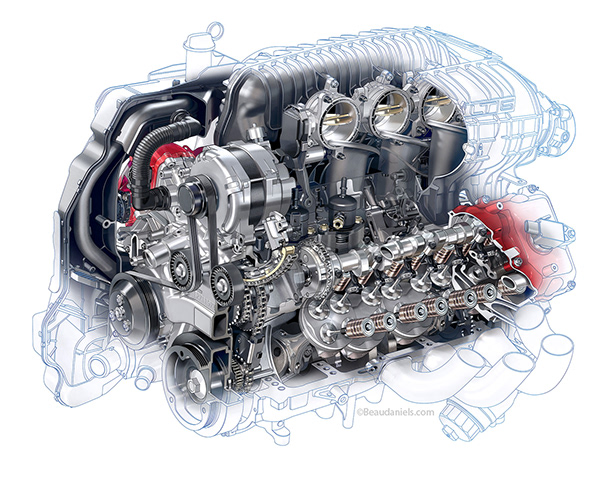 Portfolio selection, please choose from the menu on the left. Each gallery consists of thumbnails that lead to their own gallery

As for programs and schools, I believe that you have answered your own question. Both Doug Chiang and Scott Robertson studied design (trans I think?) at Art Center. If I were you, I would look into a design degree at a place like Art Center or CCS. You can get a general degree in product or trans or entertainment and take other classes to complement your illustration interest.

Also, I think you should realize that you don’t have to go to a great school to be a great illustrator. The structure and resources may help you get there faster, but if you put in a lot of time and effort and take advantage of the vast amount of learning resources available online and elsewhere, its possible to do it on your own.

FYI, this link may interest you:

my $0.02
What tends to make people with ID backgrounds do well in entertainment design and be strong draftsman is the fact that we generally need to draw something as we would like to/ intend to make it, so there is often a level of manufacturing detail that others may not include for reasons of lack of knowledge or lack of concern, but these are the details that tend to make these things more real.

Have you checked out any of Scott Robrtson’s DVDs? Might get you to where you want to be. Also, Pasadena City College has an associates program that is a feeder for Art Center. If you just want to get up on the sketching part, this might be a lot cheaper way to do it?
http://www.drawthrough.com/dvds.php

I bought a book this week called “Construction and Design Manual, Architectural Renderings”, specifically because it has a section on illustrators working in a hybrid, analog/ digital/analog workflow.

You might get some inspiration from the included work. 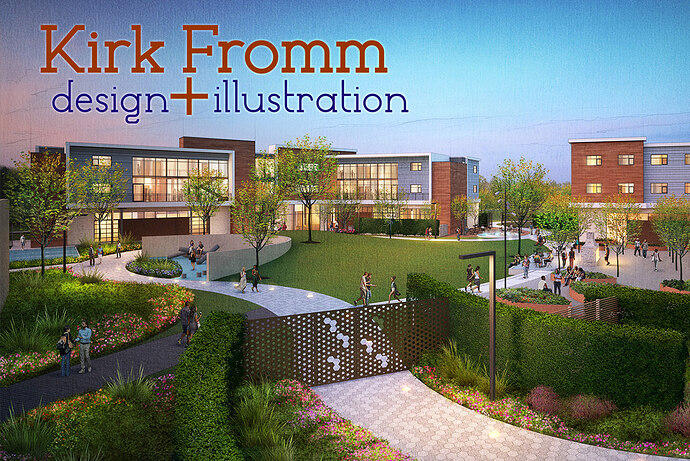 Kirk Fromm design + illustration is a Philadelphia based studio providing high-quality architectural renderings to architects, interior designers, planners, and developers. Whether your project is fully designed or only a sketch on a napkin, Kirk can...

kwilson, thanks for the note about learning from non-academic materials like books and DVDs. Michael, great tip about Pasadena City College. I’ll check out their programs. As for Scott Robertson’s DVDs, I’m itching to buy the first one. But I’m focusing at the moment on researching schools. I believe guys like Robertson can deliver great educational value in their products. But I think it’s wise to do what he and others did to get where they are–they went to school.

I appreciate all the links you guys are posting, too. It’s a bit of sweet torture, seeing those gorgeous drawings, especially the hand drawn ones, and craving the skill that made them.

Darrin,
If you are in the Area you could try Art Center At Night. Scott Robertson does teach at Art Center. I’m not sure about what classeare available at the moment, or if he ever teaches night classes. Either way it could be a good way of learning/honing some skills. I just graduated from Art Center here last summer and speaking from that experience to answer your question, Imagine two designers: one can sketch amazingly, and one can’t. Yet, both create amazing products, and are both considered good designers. This can happen in ID because it’s not really about the sketch for us. It’s about the process and in the end, the finished product. That said though, most of the guys/gals that I graduated with are very very good at sketching.