Do you think that changing the name of an academic program from Industrial to Product would increase enrollment? I think Product Design sounds less-intimidating and more descriptive.

Unless there is going to be a digital component to the curriculum then I think it will be confusing… it is a bit of an odd question isn’t it? I mean just to try this little thought exercise:

“Do you think that changing the name of an academic program from LAW to GUIDELINES would increase enrollment? I think GUIDELINES sounds less-intimidating and more descriptive.”

I think if prospective students took a few minutes to google Industrial Design they would get a good sense for it. 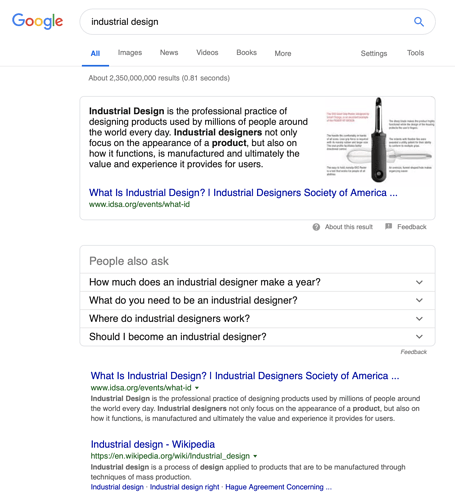 I reckon it would be too confusing. The way I have heard product design being used lately is more in relation to graphic design not industrial.

The title shouldn’t mean anything. You would hope that anyone selecting a future pathway would look more deeply into the field than the name.

What country are you in?

Just like the new name for medical fields is ‘Life Sciences’ - I think it sounds too general, less institutional and makes it harder for prospective students to have a sense for what profession they are actually going to have. Also Industrial Design emphasizes the hands-on aspect of design more which is what is lacking the most in the US. In the Netherlands Product Design (produktontwerpen) is a less academic track than Industrial Design. At TU/e Eindhoven we were educated to combine industrial design with developing interactive electronic prototypes and far-future concepts, for that Interactive Product Design is a better name.

First, a light chastising those in NPD who are resistant to a new idea. 4 lashes with a wet noodle.

And actually, in your particular example above, I think it would have incredible impact. It is a wholesale different approach to medicine that is sorely needed. Granted changing Industrial to Product really doesn’t have the same change to mindset as your example, but the first idea of change can lead you down the road to something meaningful.

I hear you iab. I think my allergic reaction was to the “would increase enrollment” part. It would depend on how that was unpacked. Is it “get more tuition” or is it “better align prospective students to the path that most fits them”… If the second, then I think it goes way beyond a name change to education and engagement with primary and secondary school students, community outreach, digital outreach… I have taught from time to time, most recently at New School of Architecture and Design here in San Diego. They have a “Sketch Jam” series that invited junior high and high school students into the studios on Saturday to get exposed to different departments; industrial design, graphic design, interior architecture, architecture. I think this has been a meaningful program for them. They also connect to area community colleges. A few primary schools in the region have also reached out to me to come in and explain design. I think this might be even more meaningful as a relationship with a school that could have more of a sustained effort than my schedule permits.

Lastly, I don’t think the idea of changing the name of industrial design is a new idea. SVA has an “objects of design” program, SAIC and Cranbrook have their “3D program”, and of course Stanford has the D School. My impression of these programs, and these might be my impressions, is that they are not really focused on producing industrial designers.

So I think it depends on what the goals of the program are.

If the goal is to have a more traditional ID program (define that as what you will in this ever changing world), and to enroll more students (and more dedicated students), then my opinion would be to focus more on pre-enrollment engagement, which is a more difficult and sustained task then changing the name.

If the goal of the program is to focus on less traditional aspects of design (interaction, strategy, design thinking, service design, user experience) then I think both industrial design and product design might be too limiting in their definition.

Just one designer’s opinion, which is what I think the OP is asking for.

Ya, I’d agree. I don’t think the problem is increasing enrollment. The problem, at least for me back in the day, was awareness of the job prior to college. I did 3 years as an ME before transferring to ID.

And honestly, changing names probably won’t do much, although explaining yourself over and over doesn’t help. But I think the best promotion would be having someone like that Tim Chalamet fellow be an IDer while fighting Thanos.

I think your story is a common one. A lot of folks transfer into ID… if they are lucky enough to hear about it! Some go back to school after the bachelors, or just miss it completely. I think there is probably a lot of talent we are missing out on.

“Product Design” has come to mean “I build a mobile phone app and do the research and front end and some of the back-end”. Search ‘product design jobs’. The schools should echo what the job market calls it.