how do folk here actually use linkedin?

i never been good at really networking, definitely fall more on the introverted side of the spectrum…generally, i really only accept invitations from people i know (or at least people that i have had a conversation with or know of), which is maybe limiting but it is also kinda weird to me that people, seemingly randomly, want to invite you “be in their professional network” and never actually link before of even after said invitation? is this just kinda casting a super broad network or do people actually use connections via linkedin to forge relationships?

#related: in my limited professional experience, it has almost always been the case where people get looks based on a recommendation or being found by someone attached to the hiring process (hr, headhunter, design director, etc.) and rarely ever through just applying to or waiting for openings…so i’m also wondering is it proper etiquette to hit up people in design (via linkedin, who would be total strangers) for insight into opportunities or should one just be looking to the hiring department people (agian via linkedin)?

I get a lot of invites, if someone sends a note, or has a title/workplace that I want to associate with, I’ll accept. When I move to a new area (3cross country moves, and a few smaller ones), I’ll usually search designers in that city and send an invite to connect, “moving to the area, would love to connect, get coffee, have someone tell me what is good to do in the area”. This has always helped me to have a network of people to hang out with in new areas. Moving is hard and having some people to hang out with always helps me.

Now that I’m on my own, I use it a lot to broadcast what I’m doing. This has attracted several projects, usually from old friends/contacts. Posting articles and other things of interest really raise the visibility of your profile. I also like the tracking tools. These are a couple of dashboard reports on my recent posts. I can see who is looking at my profile based on company, title, and location, which helps me to create more strategically minded posts. Some people post on their everyday, which can be a bit much in my opinion… it isn’t instagram. I try to do once a week. And some people just endlessly repost other people’s content, which seems a bit like fishing for likes. But to each their own. Maybe it works for them or they like it.

As long as you are within moral and cultural norms, there is no right or wrong way to use these tools. I think the most important thing is to be true to yourself. The thing I hate the most is when people broadcast a certain persona, and when you meet them in person they are totally different. It has only happened a couple of times but I couldn’t get past the dissonance. I try not to do that, I probably fail sometimes, and it is impossible to truly know how you are being perceived, but I at least try to be cognizant of it. 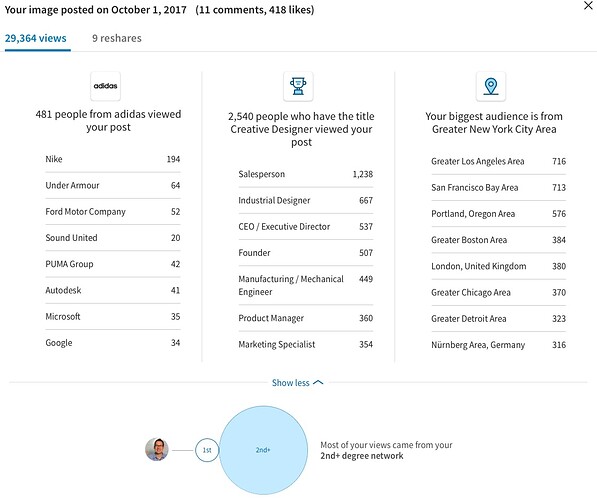 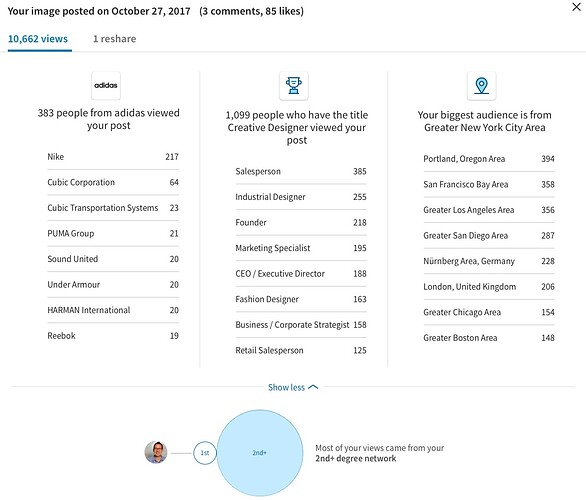 Helps to be a hotshot, Michael

Doesn’t hurt, though I 'm not sure I’d put myself in that crowd. I am willing to work twice as hard at it though and I try my best not to be a jerk about it. Not trying to brad with those dashboards, just pointing out how cool it is that you can see all that stuff! I’m not a premium LinkedIn member or anything, just utilizing all the free tools. I’ve been chipping away at this for years, it is a cumulative thing.

So i do believe that proper courtesy is lost within linked in. I will never send a invite to someone with some type of “introduction” as to why i want to connect with them. In the same sense i do not simply click accept to those who send me invites, i will usually look at their profile and see / understand what kind of connection this is. Sometimes i respond to them without accept - asking how they would like to interact -

Now what i use it for, albeit i do not put the effort into my digital presence and persona as much as i could…

I’m really curious to hear how different people use LinkedIn and what they’ve gotten out of it. Have some of you just contacted people at a company you want to work for out of the blue and it somehow lead to a job? Is contacting someone in the department in which your applying sleazy if you can demonstrate genuine interest and that you’d be a good fit?

It seems like etiquette, expectations and reactions vary wildly from person to person.

Have some of you just contacted people at a company you want to work for out of the blue and it somehow lead to a job? Is contacting someone in the department in which your applying sleazy if you can demonstrate genuine interest and that you’d be a good fit?

It seems like etiquette, expectations and reactions vary wildly from person to person.

I think there is nothing wrong with making connections and sending people messages at all.
Put yourself out there! I do this too.
If you are actively looking for the next career opportunity though, it’s important to make sure you got a good profile with all the relevant information and most importantly a link to your work/website.
I am always surprised how many people don’t put a link to their portfolio into their linkedin profile even though they have one online.

Most of the time I am using LinkedIn for professional updates, announcements and news.
So I would post about new product launches or awards or the like as I can reach the intended target audience very quickly and generate a bit of a profile as a designer for myself.

I have also started posting my Bentobox color boards and it seems like that is being appreciated by the community.
Other than that, I am keeping most if not all my personal stuff out of Linkedin and mainly use Instagram for that.

When it comes to connections, I am pretty open. The only requests I will ignore are obvious sales people, mostly chinese prototypers and moulders.

I think it’s great that we have a dedicated forum for professional information, connections and updates.
It always felt weird posting anything work related on say Facebook. In fact, I have stopped using FB altogether. It’s pretty much only LInkedIn, Tumblr and Instagram for me.

Being a younger designer, I like to look at companies with people who I think I can learn from or develop certain skills.
It’s not always easy gauging that only based on the company website.
So sometimes I’ll use LinkedIn to see the portfolios of their ID folks.
If it looks like I could learn from them, I’m interested; if their work is sub par I become less interested.

Linkedin for active connections, , a more casual way (vs. email) of contacting someone in your network but you are not super close with for advice, recommendations, and reaching out to potential connections instead of cold calling… it’s great (don’t even think of Facebook friending me for work!).

The news feed however I think is all garbage and is worse than a Facebook feed. I don’t really use any status updates (have tried a few, but there’s only so many platforms that can be updated), and don’t think of commercial promotion and Linkedin as a 'social" network. I don’t really understand people who comment on lots of posts, post non work related things (politics, random articles, etc.) and try use the feed for self overt promotion… Though maybe I’m also doing it wrong.

Don’t get me started on Linkedin groups… all spam, all the time.

PS. The non-intuitive UI is also a killer for me, as is how it tries to push you into the app on mobile. The “25 people viewed your profile” with no actual info of who they are (trying to get you to upgrade) is also a constant source of annoyance.

A start-up recently reached out to me through LinkedIn. It didn’t turn into anything (yet?) but I never expected this to happen to me, as I’m not very active on LinkedIn. I was their only ID connection (2nd through an engineer). If you amp up the marketability of your online persona, I think the benefits outweigh the costs. You might get some junk manufacturing spam requests, but you can also get contacted about a cool opportunity.

Maybe I just have a good network on Linkedin but I have always preferred it above most other platforms - you get good content and the emphasis is on building your network in a relevant way - it can lead to lots of opportunities. I haven’t gotten to posting my own content yet there though. A designer can even integrate his/her entire portfolio on the profile.

i guess it makes sense that there wouldn’t be a consensus with regard to how people use it or about what is “proper” usage given it is just a service/tool, though in this small sample size it does appear that it is acceptable/accepted practice to reach out to/be solicited by, others without the expectation of introduction/meeting ever…though a former co-worker recently told me that linkedin actually doesn’t allow custom invitations to certain accounts or maybe that is a pro feature?