Not the first one to try it.

Home to the lowest cost and most comprehensive car checks in the UK. Try our Free, Silver or Gold checks today for car buying peace of mind.

Someone needs to tell him about “triangulation.” That chassis is going to be about as stiff as a wet noodle.

Someone needs to tell him about “triangulation.” That chassis is going to be about as stiff as a wet noodle.

There is one basic rule for tube frame construction: every bay should be triangulated wherever possible. “Triangulated” means it should be made up from lots of little triangles instead of lots of recatngles.

An unbraced rectangle is not capable of taking torsional loads- you’re relying completely on the strength of the welds to keep the thing from falling apart. If you join two corners of the rectangle, it becomes a structure. You can try this yourself by making a 2D frame from popsicle sticks joined by thumb tacks.

There are obviously going to be a few spots you can’t traingulate: usually where the engine and driver go. In those spots you should either use a bulkhead or brace the corners.

Here’s an example of good triangulation (you see lots of triangles, and very few rectangles):

Sorry if this isn’t a very good explanation.

His earlier CAD models had what looked like a well thought out chassis with good triangulation. I would guess that when he went to build the chassis, he simplified it quite a bit to make it easier to fabricate. With all of the composites, I wonder why he didn’t do a monococque? Or at least something more along the lines of 1980’s F1 and prototype technology (sheetmetal monocoques)?

Somebody should tell him about this discussion. He could learn a lot from this. eh…

Actually I took another look at his website and he specifically mentioned he “had to redesign the frame slightly to simplify manufacturing”, “combined with the decision to use aluminum panels for stiffness”. (see page 11 of the initial design stage)

That’s not so bad then. I take back my snarky comment.

I agree with 73lotus though, since he went to all the trouble of making nice tooling for the carbon body, he should have just taken it to the next step and made a carbon monocoque. It would probably end up cheaper (or at least comparable), and it would be much simpler and cleaner, not to mention stiffer and lighter.

hey, maybe this is that big secret project ufo has been working on with chris bangle

hope he doesn’t get ripped off

It’s pretty cool to see how the shape translated from the Solidworks model into a full-size body. Sweet project.

just for the record, i’m far from rich (and even farther now thanks to this project!) - i just have my priorities straight

a long time ago i realised that if i waited to do things until i could afford them i’d be too old to actually do it so i don’t let the little stuff get in the way.

do give me some benefit of doubt on having thought things through with regards to structure, dynamics, etc. in fact if you read carefully enough (as the case with alum panels for chassis stiffness) you’ll pick up on most of it

check the main site http://www.dpcars.net, including the past section and you’ll see i’ve got some hands-on experience with various cars and their behaviors. i guess the proof will be in how well it all works though. keep in mind that there are many experiments in this - sowe will work, others won’t and will need to be redone. someone’s got to try things rather than just sit there and make up reasons why it’ll never fly. yeah, it might be scary to drive in its first iteration but it’s nothing compared to flying the first helicopter ever.

anyways, glad to see people taking interest in the dp1. the next few months will see some interesting developments.

Don’t get me wrong, I love what you are doing, but with a vehicle stable like yours I’m guessing you are a lot closer to rich than most others here. In fact, a guy that owns a Ducatti, an Elise, several other modded out rides, and is building his own sports car I think could safelly be classified as having a lot of money… no shame in it man.

I love the vehicle (dp1) conceptually, and I think the proportions are pretty compelling, but I think more time could have been spent working out the aesthetics. It is a bit of a pastiche of ideas off other vehicles. It would be cool if the aesthetic was as origional as the engineering. You could always design another body though once you test it all out.

Keep up the good work, are those Oregon plates I see on those rides???

any car that has 4 wheels (or 3, or 6) is a ‘pastiche’ of a bunch of others - the last truly original work was done in the early 70’s (countach, stratos, etc). after over a century of people trying to draw a shape around four wheels and one or more occupants, pretty much everything has been done at some point or another. prove me wrong

an easier task would be to see if you can actually name the ‘inspirations’ for my design. i have spent hundreds of hours on esthetics, although function is the driving parameter, and personally i like it (no surprise there). as for others, some do, some don’t. guess those who don’t won’t buy one.

when it comes to money, trust me if i had some i wouldn’t be ashamed of it! all the stuff i have costs far less than putting a kid through college and plenty of people do that. no magic to it, just priorities. few would choose to live like i do but it’s a choice well within reach of literally millions of people. they just can’t imagine it and/or justify it. some people put their energy into finding a way to do what they want, others put it into finding an excuse why they “can’t”. to each their own

I guess phrasing it that way was a nicer way of saying the form work is very unresolved. I have no doubt that you spent lots of hours on it though, that doesn’t neccesarily result in beautiful surfaces. The below pic is a great example. This is a small vehicle, yet there is a lot of very dissimilar surfaces all bunched up on one another. 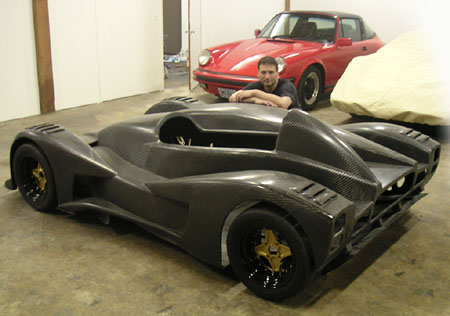 Like I said, the engineering is awesome. I’m sure this thing will be a blast to drive. Not trying to be a hater or take anything away from the amazing amount of work that went into this.

“guest” :: Not sure where your trying to go with the above

and pictures don’t fully convey the shape (to say nothing of the fact that it’s not fully trimmed/sanded/painted). that aside, keep in mind that due to design brief this is a car that is 70" wide, 113" long with an 80" wheelbase and running 13" wheels with 20" diameter tires. happens to be the same wheelbase and overall length as the original mini but 18" wider and 20" lower. it’s also an attempt to keep an 800 lb car on the ground at 160 mph (the audi TT may be nicely resolved but i wouldn’t want to drive that 3,500 lb tub even at 140). i’m not being defensive here, simply explaining the design parameters. now within those, i’d be curious to see a couple of sketches from you as to what YOU would do. all the data is out there. i’m not looking for full CAD or anything elaborate, just quick concept hand sketches with accurate proportions (no cheating with 24" rims and crazy perspective that design students are so fond of!). up for it? in fact the invitation is open to all!

and here’s a thought on ‘derivative’ designs - there’s so much talk out there of ‘design language’ and ‘visual vocabulary’, but isn’t that just an attempt to reduce art to formulaic paint-by-numbers gruntwork? take flame surfacing, new edge, whatever. or another popular euphemism - ‘design cues’. basically saying yeah, that’s what we copied. this is just an engineer’s take on the subject

and finally the really scary part - the fact that every GM vehicle was most likely designed by people with art training. yes, even the avalanche (shudder). not being a hater or anything

Actually I’ve been cooking up some sketches for you, but I didn’t want to offend, now that the gauntlet is thrown…

What’s going on at GM has less to do with design and more to do with engineering and marketing. Anyone working inside a large corporation would be able to understand. The Avelanche is a perfect example. It was actually designed to be thee size of an S-10 small pickup. Then marketing decided that it should be midsize, engineering decided if it was going to be midsize it should be fullsize so they could use the doors from the suburban. Marketing decided it was too big looking and to make it look smaller it needed plastic cladding. To make the plastic cladding work new doors had to be engineered, scapping all of the cost savings engineering wanted to get out of making it fullsize. All these decisions happened without design’s voice being heard and no surprise that it is a total turd.

On the flipside, take a project like the Mini, TT, or Bettle, projects initiated by design within companies that understand that listining to desing can be good business.

Actually I love the proportions of your car, and you are correct, it is not trimmed out, and some cars look very different in person (like the Lotus Esprit), but just looking at the way the surfaces come together, I think they could be refined. I’m not talking a total redesign, just finetuning. In design, the last 10% often takes 90% of your time.

I’ll work some stuff up for you.

and here’s a thought on ‘derivative’ designs - there’s so much talk out there of ‘design language’ and ‘visual vocabulary’, but isn’t that just an attempt to reduce art to formulaic paint-by-numbers gruntwork? take flame surfacing, new edge, whatever. or another popular euphemism - ‘design cues’. basically saying yeah, that’s what we copied. this is just an engineer’s take on the subject

and finally the really scary part - the fact that every GM vehicle was most likely designed by people with art training. yes, even the avalanche (shudder). not being a hater or anything

the primary intent of a visual brand language is to maintain brand identity across a line of products while still allowing for product individuality, so ofcourse they are somewhate derivative, it’s simply a matter of branding

as far as paint by number gruntwork, not exactly (maybe when done poorly), it is just a tool used to ensure a family looks like a family and accelerate the design process