Just had to vent a bit…had my first client come in that made me feel very dirty as a designer.

It all started off well. It was a simple packaging design job. Design one of those blister packs where you slide the cardboard piece into it and staple it together.

We got into it and started to layout the packaging artwork. My first eye rolling event was when the guy gave me a photograph to put onto the package. This is a swimming product. It was a photo of the guy (who is like 75 yrs old) photographed in a studio “pretending” to swim and then the product, very badly, photoshopped into place.

Then he proceeds to pull out “the competitions” pacakage and says he wants me to copy what they have. At which point I balked and said that I will “bring the same essence” but I refuse to copy the design. He didn’t like that, but accepted it.

He had all the copy for the artwork done for the most part. He decided that it would be prudent to “hang out” in my office while I placed the copy. He was noodling over something and decided to ask what I thought about a “slogan”. It was lame, and I told him as much. He looked a bit confounded by this and then holds up a brochure from his competition saying, “Well, THEY use it on their collateral”.

It was at this point where I started feeling really, really dirty. I just wanted to get it done and out the door. He turned into Uber-Designer. After I layed it all out, he sat down and rewrote all the copy. Moved every little detail a mm or two. Went back and changed the copy again. Turning a 1 hour job into a 3 hour job.

I wanted to scream.

He never negotiated price heading into it, so rather than charge him what I would typically for this kind of work, I charged him our full rate plus a bit. He didn’t like it. I told him I wouldn’t release any artwork until he paid.

He paid…in cash. He tried to get out of paying taxes…I wouldn’t let him.

He just left our office. I need a shower.

I don’t think I will ever see him again

That is dirty, and annoying. At least you got Rate +, in cash no less.

You got paid in cash for an around-the-world.

" Therefore I would call that experience, a hand-job.

OH…for the record, I just noticed I didn’t mention this…I did NOT put the competition’s tag line on the packaging. I refused.

Again, he didn’t like that, but he accepted it because he saw I was VERY put off by the idea. 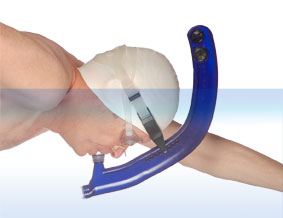 well damn, now I want one!

we’ve all been there. nothing that a good scotch at the end of the day can’t fix, though…

a good book i bought a while back covering issues like this you might want to check out is “How to be a graphic designer without losing your soul”.

It’s full of a great anecdotes, studio management tips and professional advice from pros like stefan sagmeister, Neville Brody, etc. It covers everything from how to set up a studio, clients, self-promotion, the creative process…

I highly recommend it. It sounds like a “chicken soup for the soul” kinda garbage affirmation thing, but i can assure you it’s nothing like that. it reads a Design Observer article.

duh…why didn’t I think of that

I think I own and used the competition for this product when I was swimming competitively. Worked well, you look like an idiot using it though.

Why is it that some people just want what their competitors have already done? Do they really want to be the same as everyone else? I’ve had a couple of clients who I’ve been freelancing for who have said “Just take the copy of X-companies website and change the brand name”.

A definite flat refusal from me. Out of interest, what is the legal stance on this? Especially with regards to copy?


I wonder who actually photoshopped that swim snorkel oddity? I hope that they don’t call themselves a photoshop guru, it’s embarrassing.

What I don’t get is why even hire a designer? Could have probably gone straight to a packaging vendor with his competitions package.

When I was faced with a similar problem, one of my mentors once told me:
“This project is going to happen with or without us, so even if we can make a 10% better design, we’ve won”

When that doesn’t work for me, I’ve been know to tell people:
“You don’t need a designer, yo need a photocopier”
Not a friend-maker, but it feels good to say sometimes. Like with a fist fight, its hard to know when to roll up your sleeves and when to walk away… or run!

My tact would probably be to ask how/ if their product is different/better
than the comp. Then depending on reply hint that it would be great if
WE could figure out a way to include that in the packaging. Hindsight is
20/20 ofcourse.

My tact would probably be to ask how/ if their product is different/better
than the comp. Then depending on reply hint that it would be great if
WE could figure out a way to include that in the packaging. Hindsight is
20/20 ofcourse.

Well, I did start out with that. The way the project start out it seemed like it was going to be a good opportunity for this approach. He had a piece of white cardboard where he laid up what he thought was the correct positioning for everything. He had FPO locations for his photos that had yet to provide for me. He had all the tentative copy written out in pencil (erased several times in many cases). The guy had put a lot of time into it. It appeared as though he had really thought out what he was wanting to do. So, I was thinking, cool…an hour or two of laying out a concept or three, an hour or two of massaging the copy and blammo…we’re done.

It was about 30 mins into the gig when Oz’s curtain was pulled back and it revealed that all he had done was trace the competitions package and then placed his product on it for laying it up. He quite literally copied the whole approach of the competitive layout…title, testimonial, technical photo, description of how to maintain it, and a suggested workout.

Once I saw the competitions package I probably did the wrong thing. I rolled over and went into Helvetica mode.

I became a photocopier as soon as I realized that was all he wanted. Did I make it 10% better than it would have been otherwise? Probably not because I had zero passion or interest in anything but getting it out the door.

Years ago I had a potential client in my shop one evening. He’d been trying to get down to see me for over a month, but being a local big-time real estate developer he had canceled and rescheduled several times. I was looking forward to working with him; he was “well capitalized” to say the least.

We went over his ideas for a sales aid that would broadcast a description of the house you were looking at on your automobile radio. We agreed upon a development schedule, and he was accepting of a down payment. We closed our business discussion and as he and his assistant were walking to the door he pulled out his wallet and handed me a folded bill. “Here, this’l get you started.” he said. Somewhat taken aback I took the bill. “Queer as a three-dollar bill ain’t he?” he grinned, “You can keep that!” It was a “3-dollar” bill with the picture of President Clinton on it; a gag item he had had printed he told me.

At the time I was young(er), and had recently just completed a profitable project with other prospects in the pipe; maybe I was full of myself too, I don’t know. But I do know that his tone instantaneously pissed me off … so I told him he could keep the three-dollar bill, and his project. Compulsive on my part, yes; intolerant, yes. Professional? No. But his attitude said a lot to me about how he regarded people with whom he did not agree. There was more than an even chance that at some point we would disagree on some aspect of his project, and I didn’t want to deal with him.

Not a friend-maker, but it feels good to say sometimes. Like with a fist fight, its hard to know when to roll up your sleeves and when to walk away… or run!

“Last, but by no means least, courage â€” moral courage, the courage of one’s convictions, the courage to see things through. The world is in a constant conspiracy against the brave. It’s the age-old struggle â€” the roar of the crowd on one side and the voice of your conscience on the other.” > _ > Douglas MacArthur

Sometimes, people are just looking for someone that “knows some software”. They have an idea in their head and they just don’t know how to do it. I think we’ve all been in those situations before where we’re just the bridge between their mind and the computer (because they don’t know how to use one).
I heard a story a long time ago, I think it was from a graphic design teacher in my school where he had a client like that and so he told the client to just go ahead and design it themselves and he’d be back in a few days to pick up the check.
The closest I’ve ever come to that was explaining to a person that there’s no way that I could possibly satisfy them if they already know what they want, there’s too much translation and they won’t be happy. If they want ME to design it, then I can but it may not match their preconceived notion. If they want me to just teach them how to use the computer so that they can know how to put out their own ideas, then I can do that instead.
But I definitely let them know that what they want from me is not design, they’re not taking advantage of the skills I bring to the table. What they want is for me to be their non-thinking computer interface which will almost always leave them unsatisfied and feeling like they still have to change things.

That is a good way to think about it and explain it Skinny.

Wohâ€¦ I thought that these happen only in Greece!!!

Here is my story. A few years ago a friend of mine told me about a graphic design job and a really demanding customer he had. The whole project was about a business card and they spent together more than 3 days in searching the right color for his logo, the customer was a 50 years old guy with absolute no sense of design but with a strong opinion about art and everything!!! He didnâ€™t like any color combination so my friend had to find a solution. To make a long story short one day after 2 hours of searching colors my friend moved in corel draw a little bit the logo and the customer saw the software preview (that strange blueish color), he screamed that the previewâ€™s color was the right color for his card!!!