Oh my, I kind of love this thing. It is like a Tesla Model 3 and a vintage 911 had a baby… in a good way. We will see what makes it to production but I love the smooth sleek lines of the concept… and I’m a sucker for some plaid cloth interior.

Hyundai is on a quest to extract complexity from its design department in order to make its cars purer and more minimalist. It introduced a concept named Prophecy to illustrate the direction it will take future electric models in.

The company calls its next design language Optimistic Futurism, and it explained its aim is to “forge an emotional connection between humans and automobiles.” We could easily argue this link was established over 100 years ago, but that’s not the purpose of this piece. Back to the road: the Prophecy stands out as a swoopy, low-slung sedan that breaks all ties with current members of the Hyundai range. Its low, grille-less front end wears pixel-like headlights reminiscent of the 45 concept unveiled in 2019, and its roof line is steep enough to earn the fastback label. It flows into a rear end characterized by broad shoulders, a spoiler, and a wide panel made up of LEDs.

Are we the only ones detecting a little bit of Porsche DNA in this design? Hyundai begs to differ; it instead bragged its designers have achieved nothing less than the ultimate automotive form. It likened it to a perfectly weathered pebble, and it pointed out the propeller-shaped wheels direct air down the side of the body like water over a stone. The Prophecy’s dimensions haven’t been released yet, but it looks like a reasonably big sedan.

Similarly, Hyundai hasn’t released technical specifications. All we know about the concept’s drivetrain is that it’s entirely electric, and that its battery pack is housed under the passenger compartment. Ditching gasoline allowed designers to give the Prophecy a surprisingly spacious interior with four seats, a color screen that occupies most of the real estate under the windshield, and a pair of pivoting joysticks that replace the steering wheel.

We wouldn’t bet on seeing the Prophecy reach showrooms as-is anytime soon, but it shows how Hyundai envisions its design language evolving as it rolls out an array of electric models in the coming years. One aspect of the Prophecy that’s already on its way to customers is the pixel motif in the lights. The production version of the aforementioned 45 concept — which has morphed into a crossover — will usher in this styling cue in 2021. 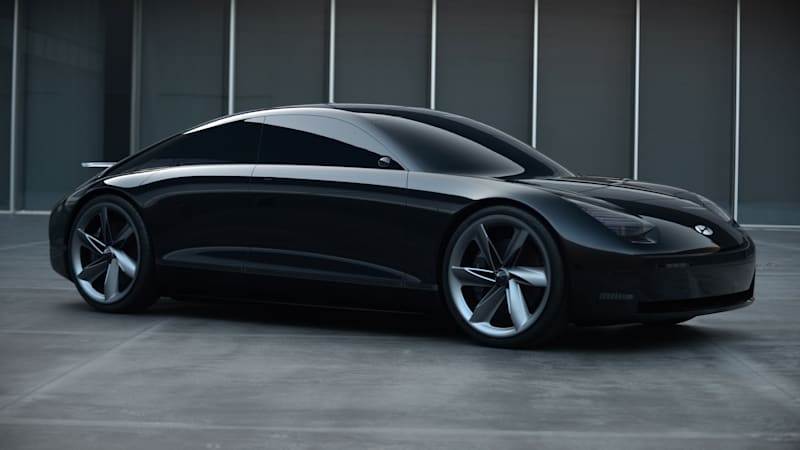 Hyundai introduced a concept named Prophecy that explores how its design language will evolve in the coming years. It's stylish, electric, and high-tech. 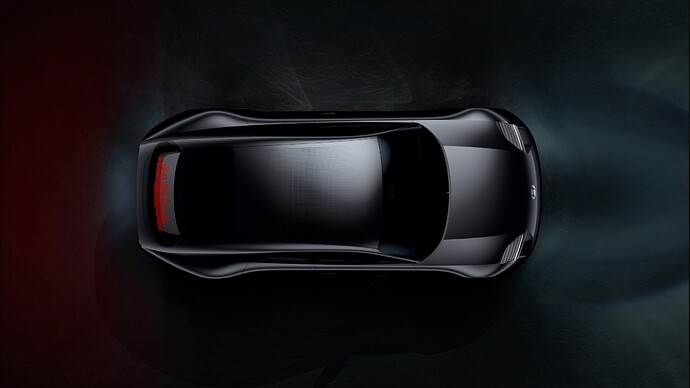 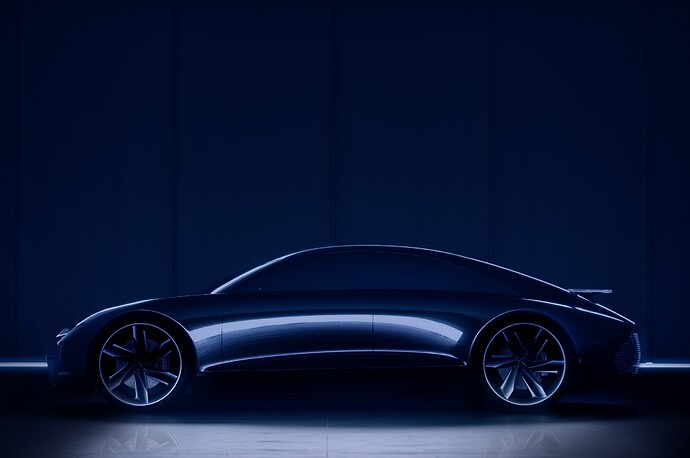 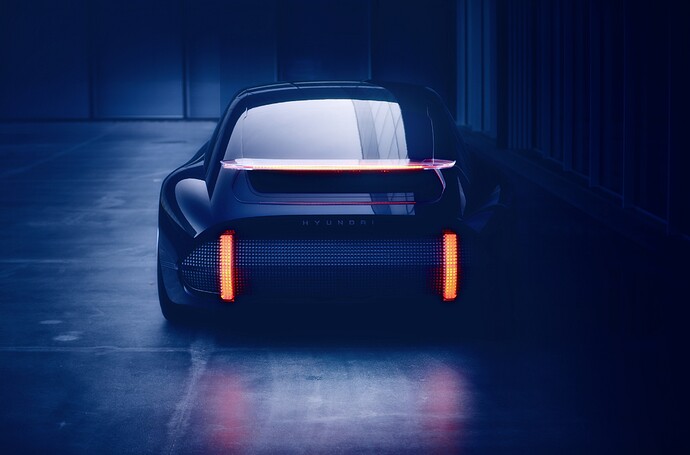 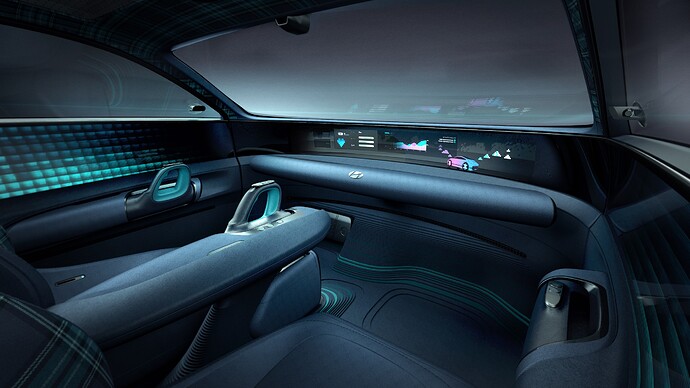 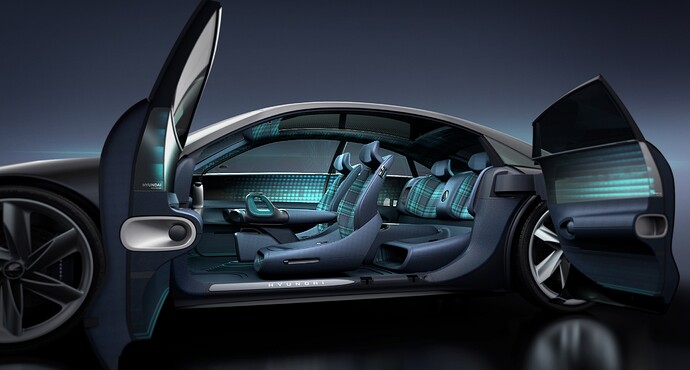 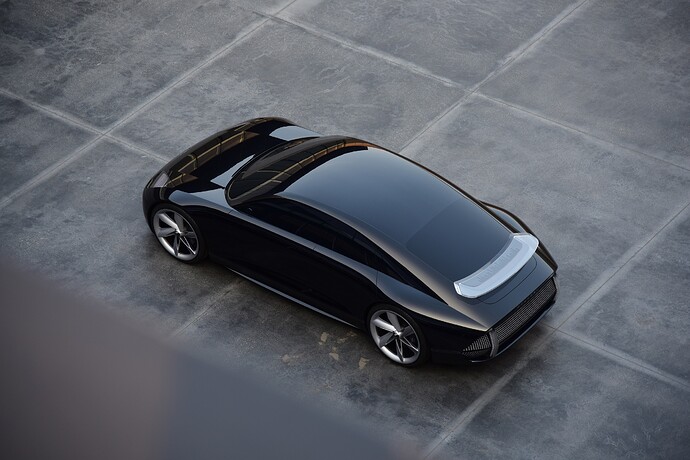 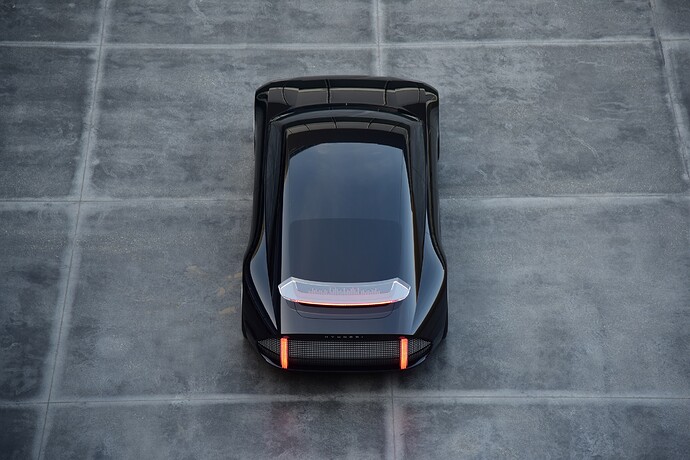 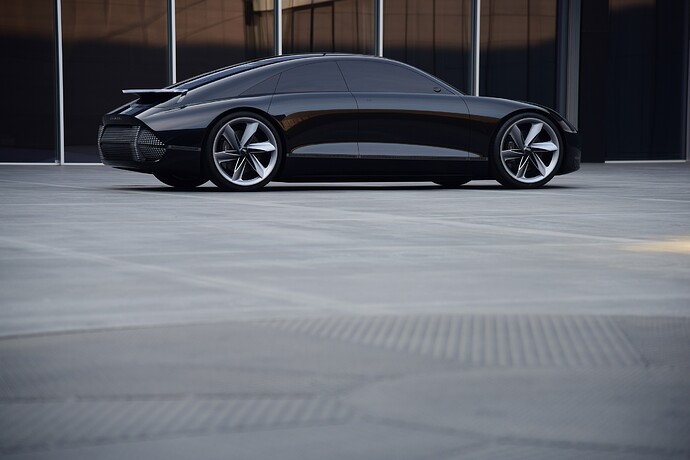 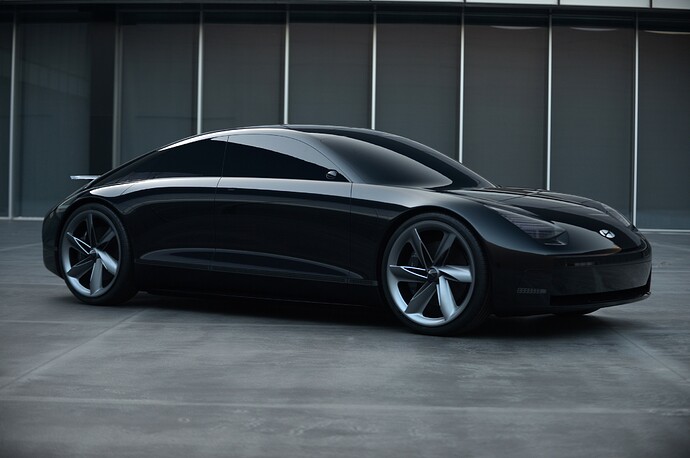 For me - that’s the problem. And, throw in a bit of Mercedes. This Hyundai is a confused muddle.

The rear side window (d-pillar?) has a weird proportion problem with the wheel well and door. IMHO. Other than that, pretty nice. I think the rear is the most iconic piece of car design I’ve seen for over a decade. Front is just OK. A little too Tesla.

As for the Porsche influence…as a P-car guy, I don’t see much Porsche here. It looks more Merc CLA to me. The whale-tail is a little Porsche-ish, but I feel like it’s a natural outcome of the form they started with. 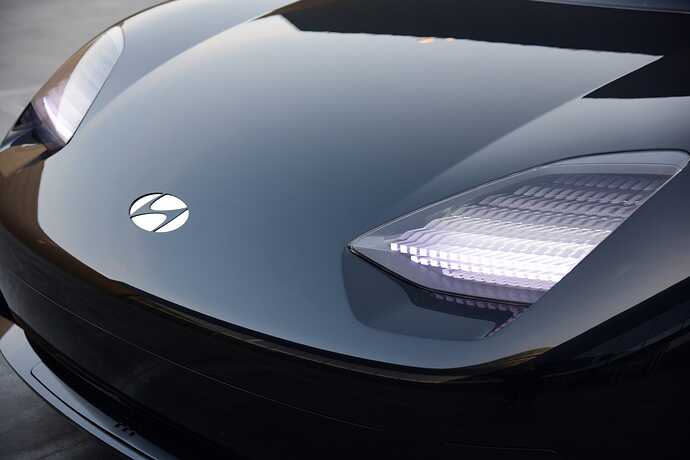 Dig the lines, dig the logo on the hood especially as it’s right up my alley. Little confused on the rear bumper that looks a bit like it could be a compound curve Daktronics scoreboard…

Other than that, if future Hyundai’s look like this - Take my money.

That last photo SHIELDS put up displays a really nice intersection of headlamp and hood. More ‘product-like’ than automotive convention. The gradient light bars and the implied light direction from the inner planes of that hood cutout, all feels really well done and efficient. Guessing a typical front engine car wouldn’t have the room for those long headlamp parts. Logo looks good too - I bet it GLOWS though. 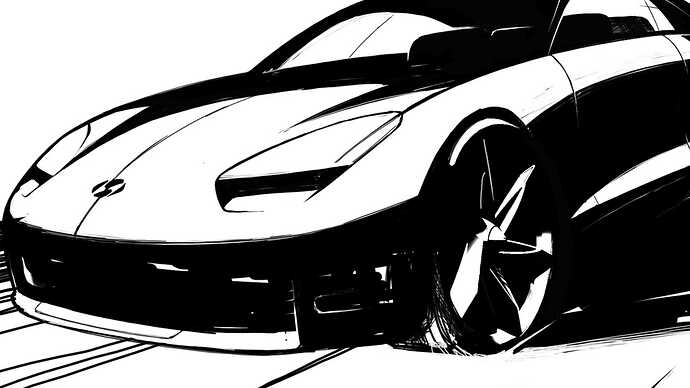 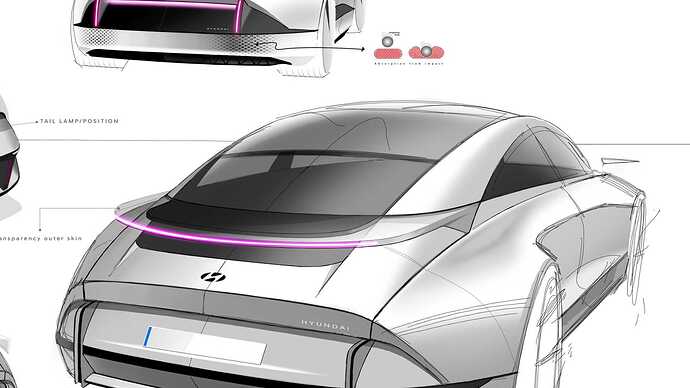 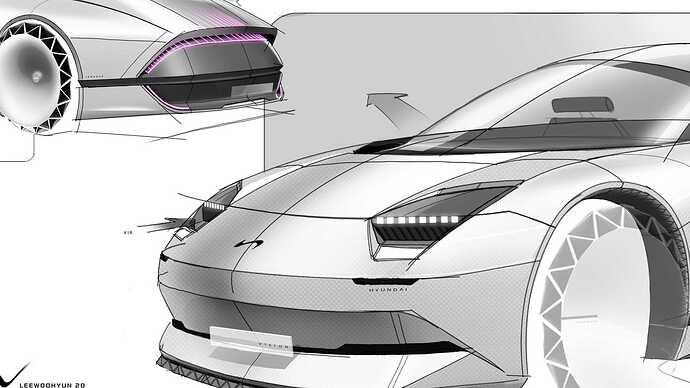 That first one looks sketched over the render, I love how sketchy and loose the rest are!

Love your sketches. I just hope, that Hyundai gets the transition to serial production more tightly done than Pontiac used to:

hey, the Sunfire was my first car

5 speed manual coupe, black… total piece of garbage. I don’t think this will execute like a Sunfire, just look at any of their new cars.

I got a rental Sunfire when my del Sol was stolen. Lateral move from a Trabant in my opinion.

If I’m looking at it from the branding point-of-view, this is a monstrous hybrid. Too much Tesla, too much Porsche. But if I look at it as a car, it’s surprisingly emotive and the lines work extremely well. Rear dips a bit too much and the lighting will be a nightmare to have replaced - with these strong lines I have good hopes for the step to a production model. I also wonder why the huge roof surface; are they going solar anytime soon?

came across some more images of this thing… still love it: 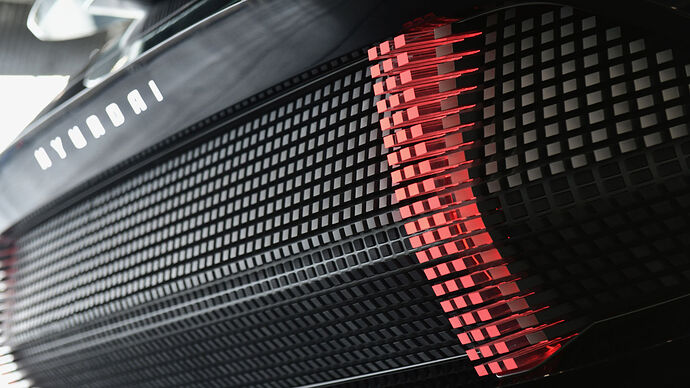 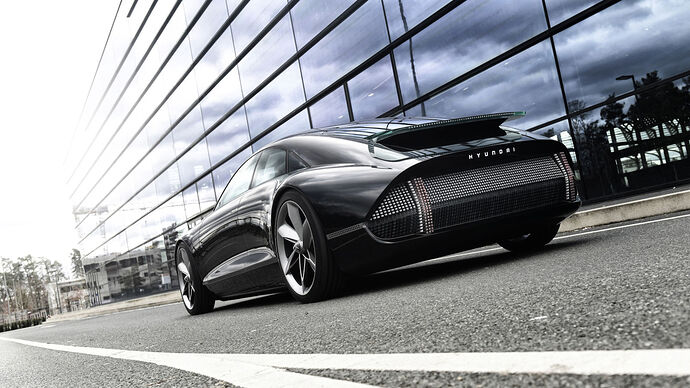 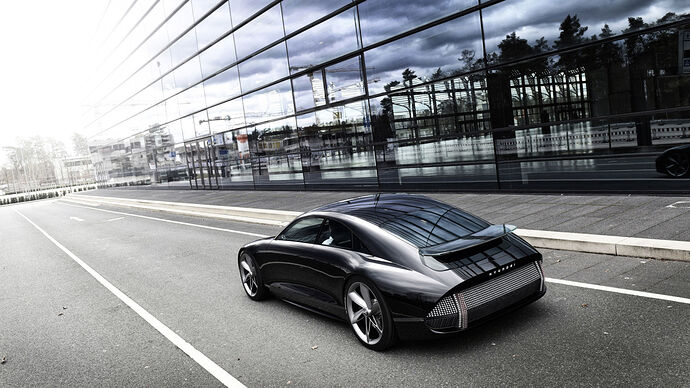