I feel like I shouldn’t like this with its ‘super-swoopy-everywhere’ styling, but I just can’t help but like!
Its a bit too ‘look at me’ for my personal taste, but I can’t deny that it has some presence and I look forward to seeing what commercial products they may distill from it. Kinda reminds me of a nineties style thats been mixed with the noughties vibe… 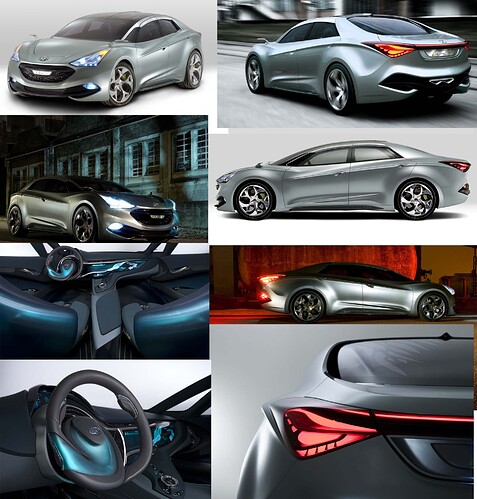 The Good: Incredible detailing. I love the steering wheel. I’ve never seen anything like that. From some views, there is a real great fluidity in the surfaces. I actually like the weird asymmetric grille. Asymmetry always gets me.

The Bad: From other angles, like the side projection, it looks heavy and oddly proportioned. Some of the fluidity that looks great from some angles, doesn’t seem to translate into other views.

Other: It looks like they took the Mazda design concept and just pushed it further. It still doesn’t look like a Hyundai, it looks like a copy of something else.

The Bad: From other angles, like the side projection, it looks heavy and oddly proportioned. Some of the fluidity that looks great from some angles, doesn’t seem to translate into other views.

Particularly the back end. The rear 3/4 view is gorgeous but the side view is very bulky and awkward. That downward sloping detail towards the taillights makes it feel like a Chrysler Concorde or Dodge Intrepid.

In side view I think it looks a lot like some of the Chrysler cab forward concepts from almost a decade ago. Not a bad thing, but if you said this was some crazy “Avenger” concept from 2000-2003 I wouldn’t have been shocked. I remember a couple of years ago saying that I thought cab forward would come back into vogue, and I think it is happening, it was a little ahead of its time in some ways, and manufacturing had to catch up.

I agree with the concepts, a little Mazda like, but there is a lot of really cool stuff going on with it as well. As pointed out, that steering wheel is pretty fresh.

Too busy to appreciate the better details, but I do like the back overall. The taillights may be derivative, but they are a very beautiful evolution.

this steering wheel reminds me of the only asymetrical set of wheels that I can remember
on a car:

These were on a special Edition of Citroen’s AX Model. I always wondered about the weight
distribution.

Have a nice weekend everyone! 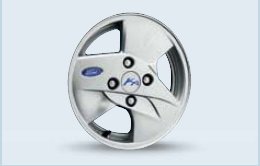 Ford also put these asymmetric babies on their 1st generation Ka. I was always mesmerized by them and thought it was the beginning of something …but apparently not! (yet?)