My final year major project for last year (2013), was a Hypokit Injector. I’ve begun to work on it again for competitions and my portfolio, and seeing as I no longer have constant access to the feedback of experienced designers, I will be uploading my progress for both feedback and motivation.

The Nutshell
A HypoKit Injector is an emergency, life saving device that is used to administer Glucagon to a diabetic suffering hypoglycaemic shock.
This occurs when they take too much insulin or forget to eat after taking insulin, causing them to fall unconscious due to the rapid drop of blood sugar. Death can occur in a timeframe of 15 minutes from collapse, and Glucagon hormone can take up to 10 minutes to take effect.

Ill upload the most important findings to outline the development so far. CLICKY to see everything so far.

The Inspiration
There is only one HypoKit type available globally. This consists of a separate syringe (containing water) and vial (containing glucagon). Glucagon is not stable (usable by the body) for more than 10 minutes in liquid form, and must remain in dehydrated powder form until immediately prior to injection.

My experience from using the Hypokit was not positive; I was slow, made several mistakes and struggled to understand the instructions, even though I was fully cognitive, had researched the topic, and was not panicking. The current device is relatively primitive, and I couldn’t imagine needing to use one quickly and in an emergency, without prior medical experience, and possibly without having ever heard of a HypoKit Injector before.

Development 2013
The Research (Sorry for the wall of text)

The design needed to be universally understandable and usable as easily and quickly as possible. The user should not be able to make mistakes.The viewpoint of the project was to revolutionise the HypoKit from the old-style syringe and vial to an easy to use, all-in-one system that suits the standards of modern medicine.

The initial stage of research revolved around current technologies and identifying the most functional route of administrating the medicine. The current HypoKit is the way it is because of the instability of Glucagon in liquid form. Non-aqueous Glucagon was found to be an alternative to the dehydrated product, and is permanently stable in liquid form, meaning no mixing. However, the technology is currently in its own research stages, and is not currently feasible for the HypoKit. Dehydrated Glucagon hormone was concluded to be the only available option for a HypoKit Injector, and would require mixing. Alternative methods of administering Glucagon directly into the bloodstream were researched, to explore the possibilities of nasal vapours, ocular liquids and transdermal patches. Oral methods of application were not considered, as Glucagon cannot be absorbed via the gastrointestinal system. Injection via needle was concluded to be the most efficient route of administration with the currently available pharmaceutical technologies.

The secondary stage of research focussed on an in-context user test with a dummy and distractions. 30 classmates were used as test subjects to find the primary problems with the device. A general overview was also conducted of the user requirements, competitors, medical product standards (Therapuetic Goods Act 1989), patents, medically-approved materials, production methods and disposal requirements. Sustainability was also researched, but was overshadowed by the strict medical standards of production and disposal. From a feasibility perspective, a market analysis, paired comparison and function analysis were also conducted.

User Test Results
The main difficulties found were:
**a)**Is too complex to be used easily, quickly and accurately while stressed and panicking
**b)**Is too small and fiddly to be used ergonomically with shaking hands or heavy breathing
**c)**Has an exposed needle, this is unacceptable in modern medicine due to the danger of blood-borne disease
**d)**Has inaccurate instructions that are both hard to read and hard to understand. They also consist of 4 steps, while the recommended maximum for an emergency device is 3.
eAverage Use Time: 60 Seconds
f Average number of mistakes: 3

This user test was conducted in a calm, studio environment, without a real unconscious body. The testers still found it difficult and slow to use and understand. This would be multitudes harder in a stressful emergency situation, where the user may not be cognitive.

I’m going to re-scan the sheets individually to show them in detail, but at the moment only have them available as groups. 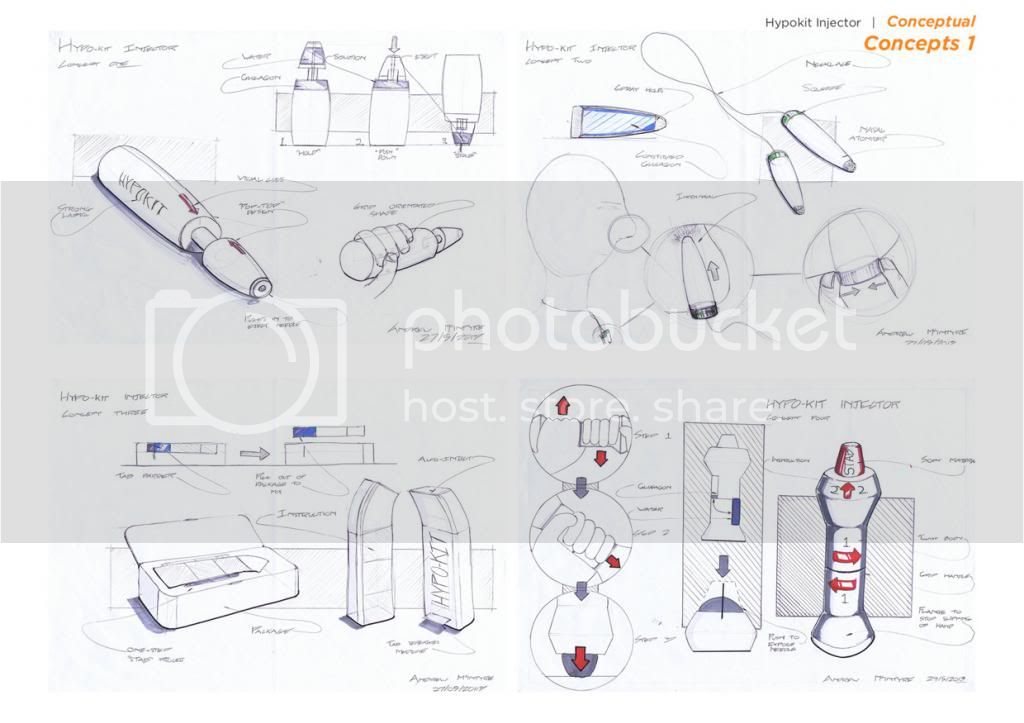 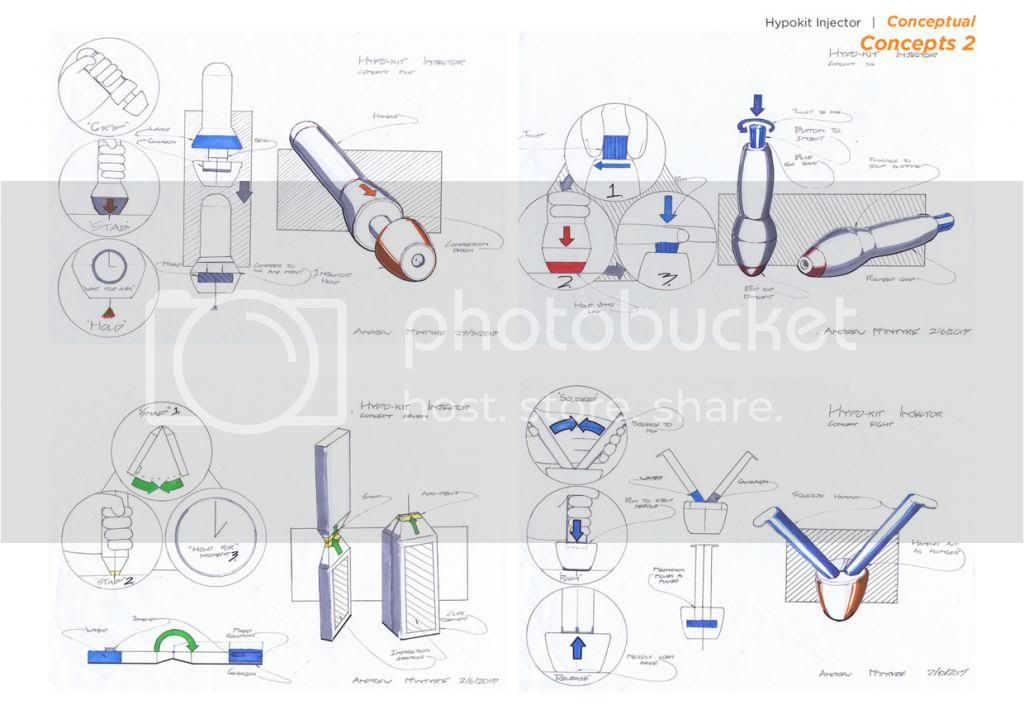 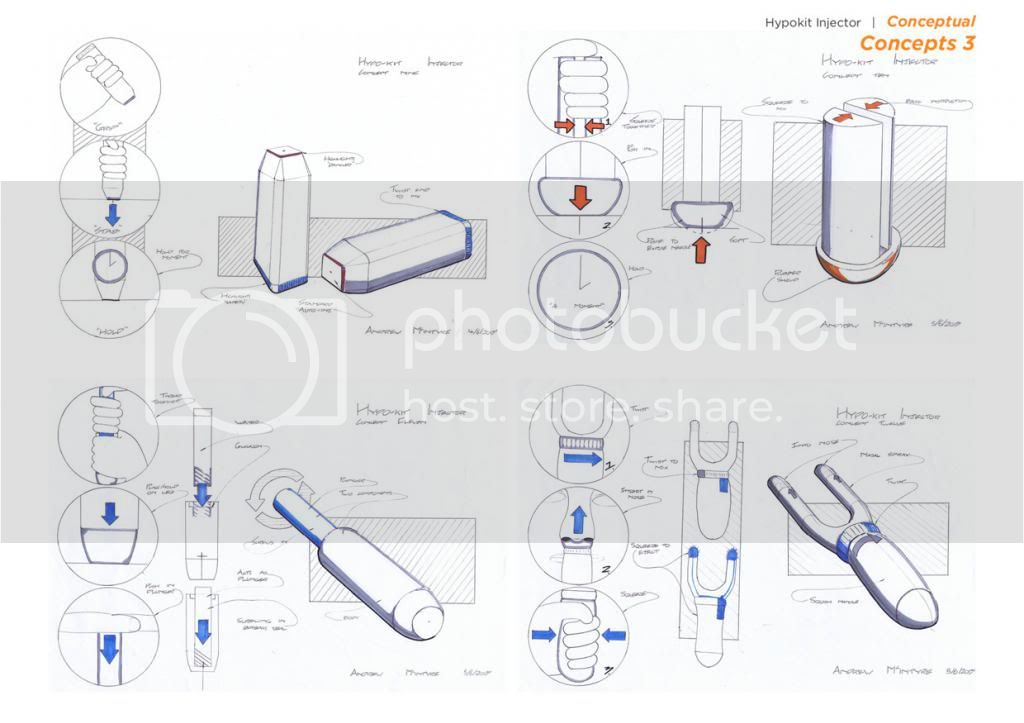 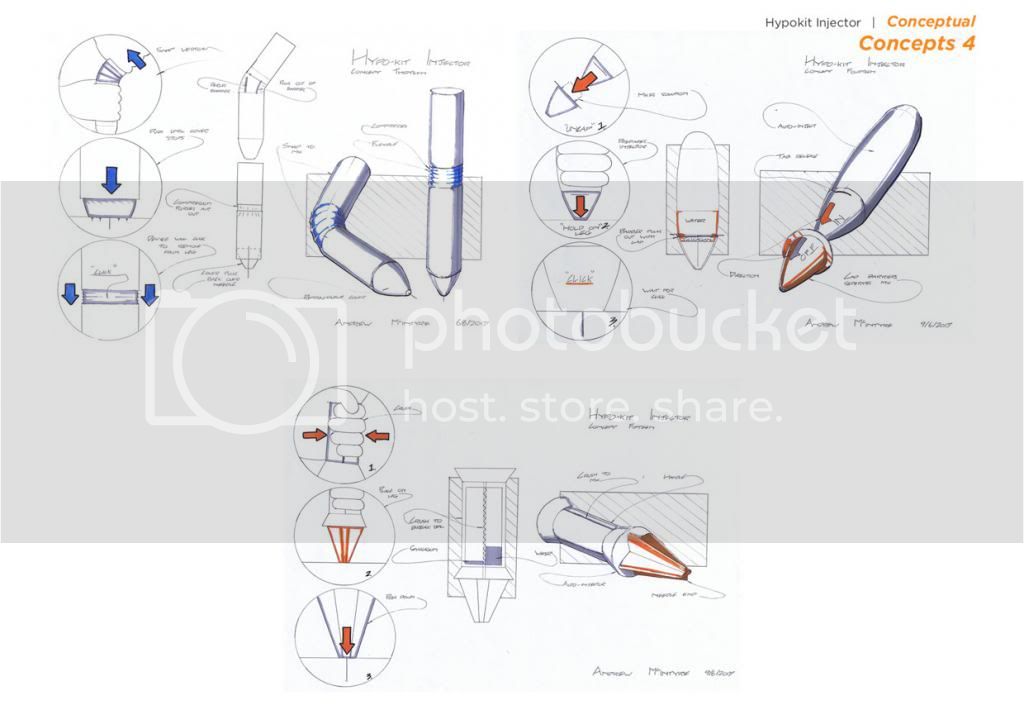 The concepts were filtered down via popular opinion from classmates and professors. The 4 deemed most likely to work: 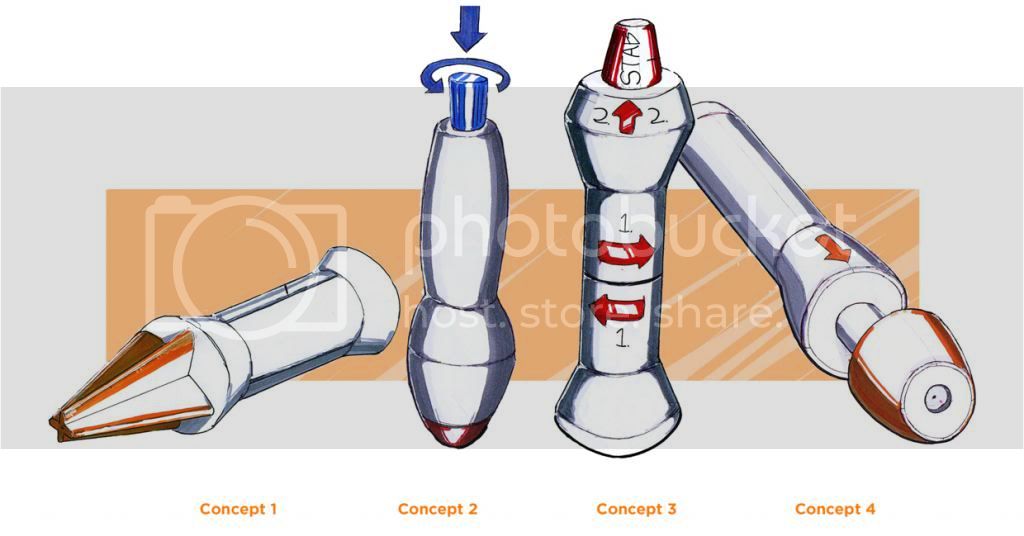 Mock models of these were built, tested, and compared to the current design. 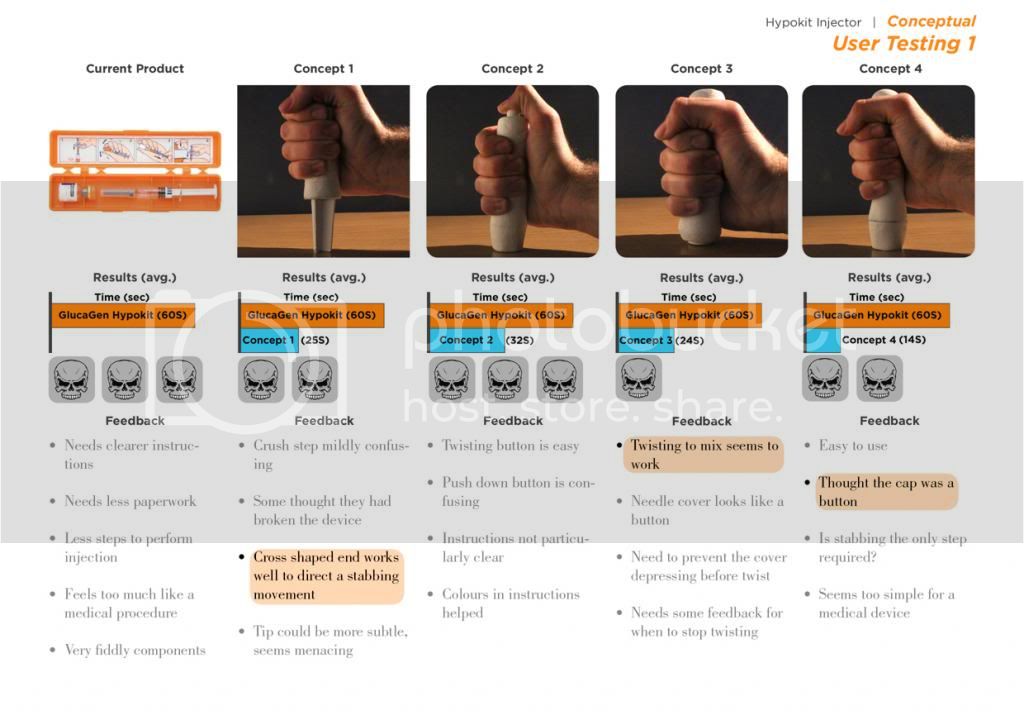 The features of each that showed the most usability were blended into a final concept. 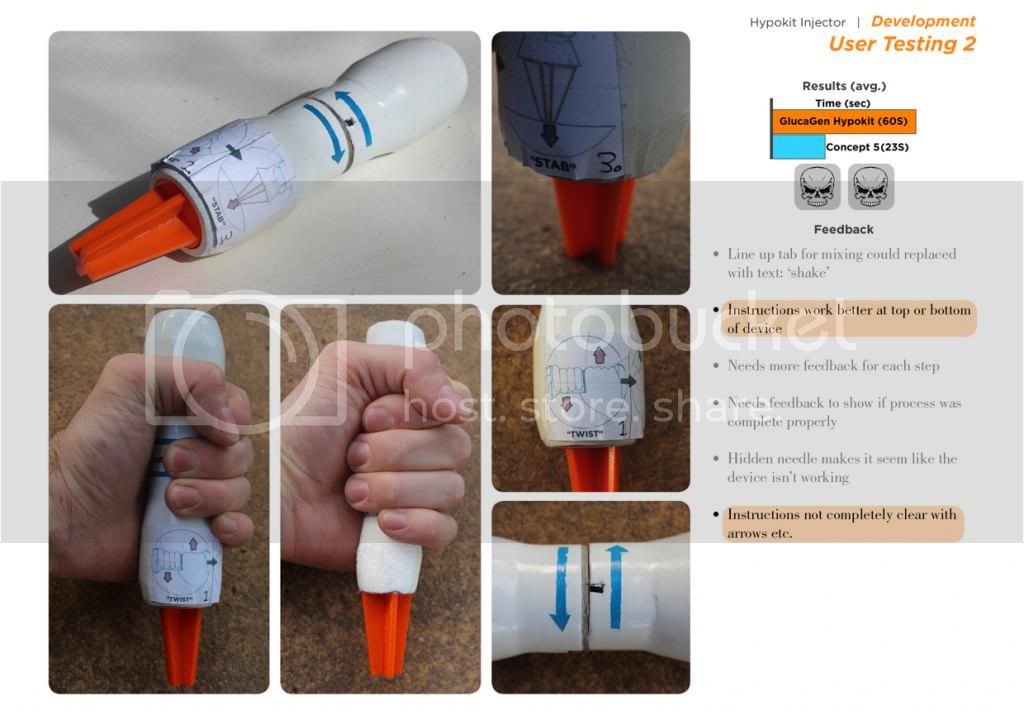 Development of instructions. A graphic design student worked on this as a very minor project.

1:1 testing of size, fitment and assembly. 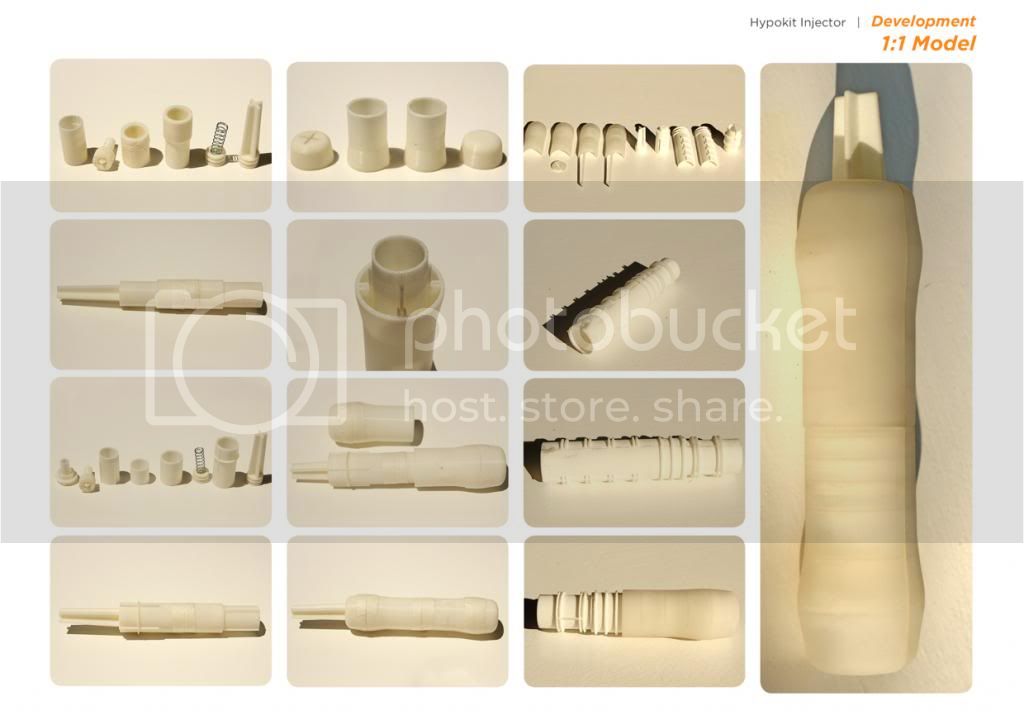 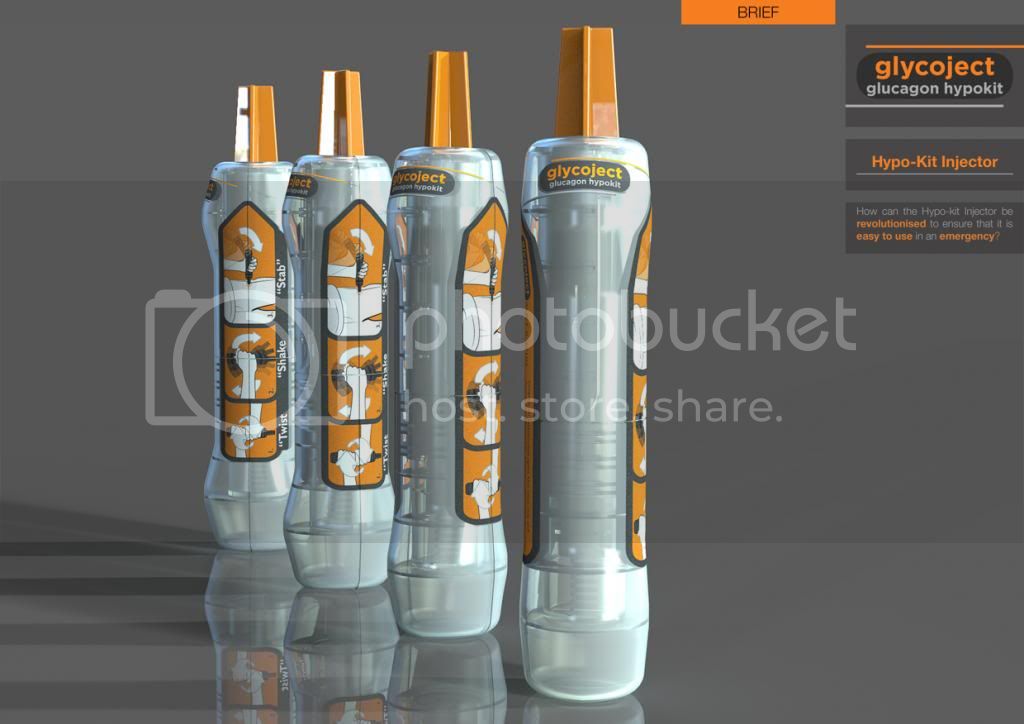 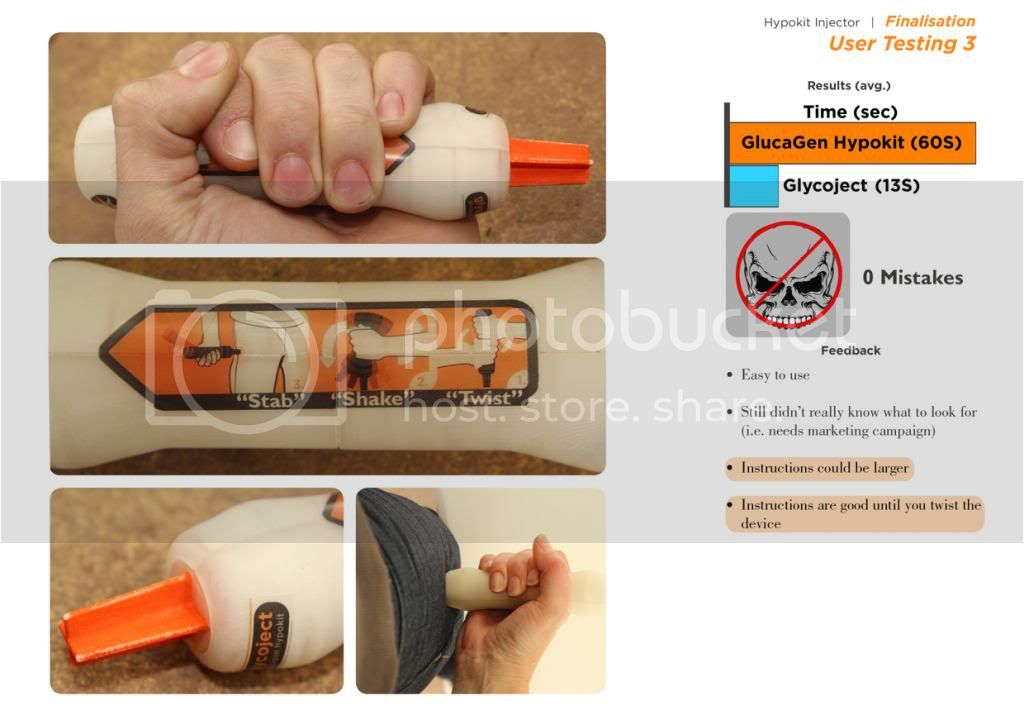 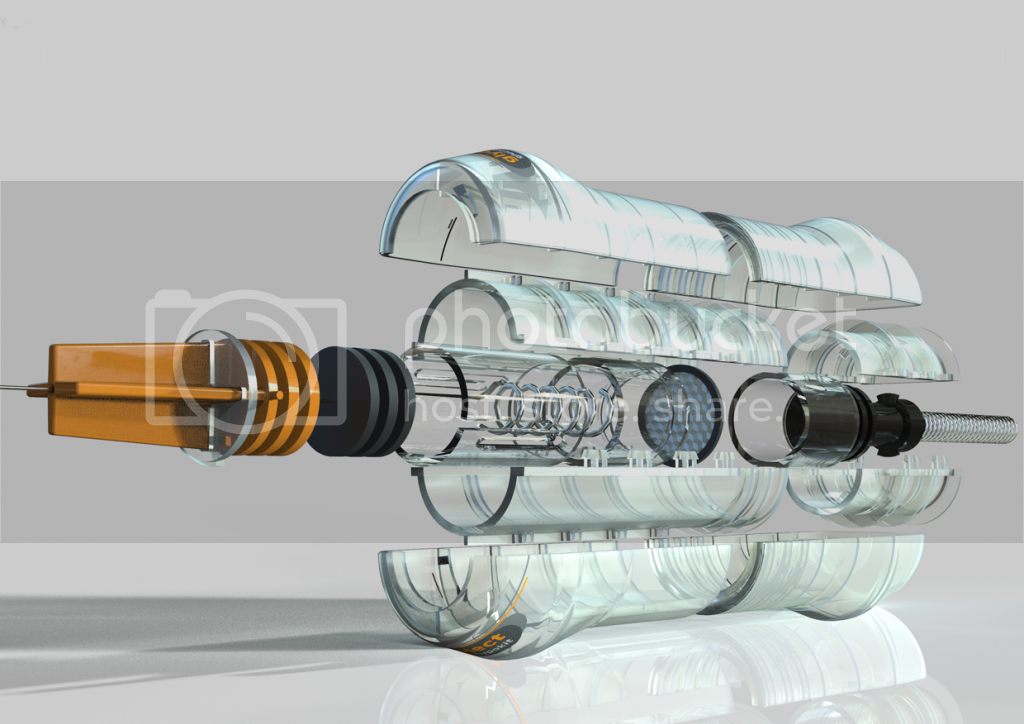 I couldn’t get the embed code to work, so a video showing how the internal mechanism works can be found HERE.

Updates 2014 (So far)
Instructions
Instructions were made as large as possible. The device now also reads ‘Hypokit Injector’, very clearly. The "shake’ step has been removed, as it was deemed unnecessary. 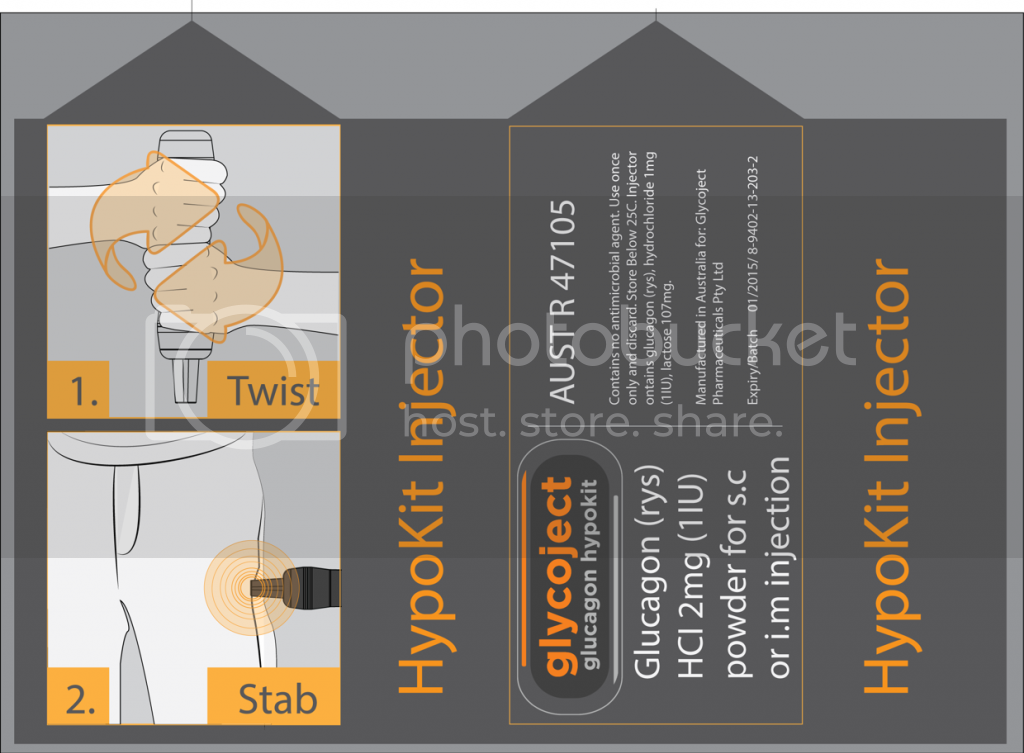 They have not been tested, however I think that they are more usable and are also more attractive (aesthetic usability effect perhaps?). 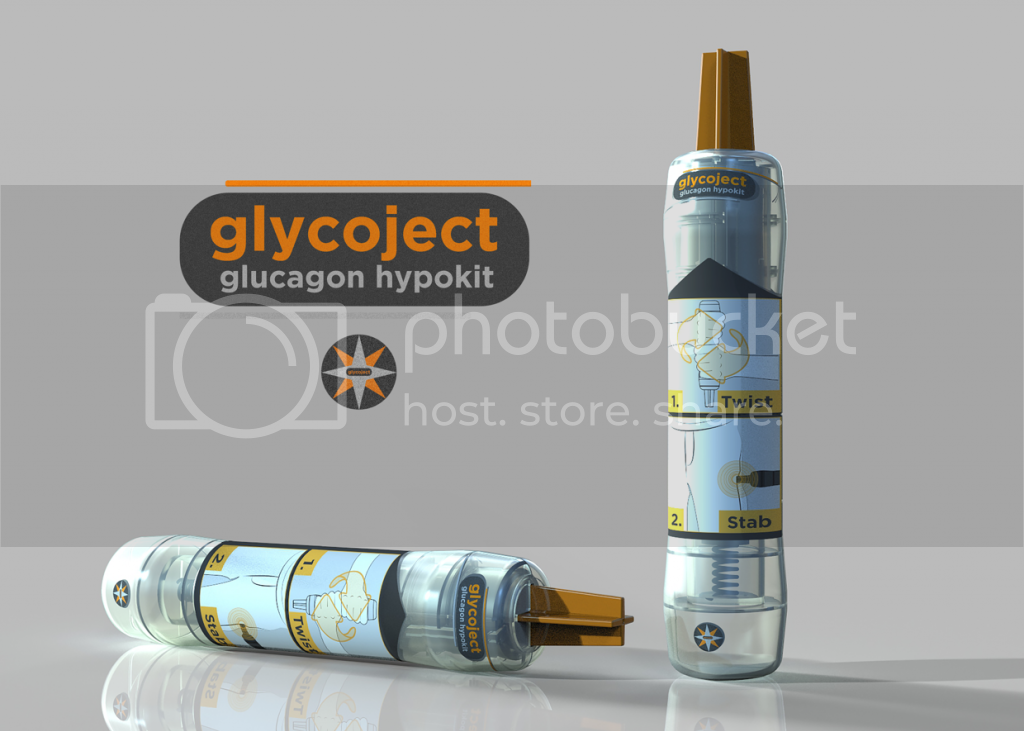 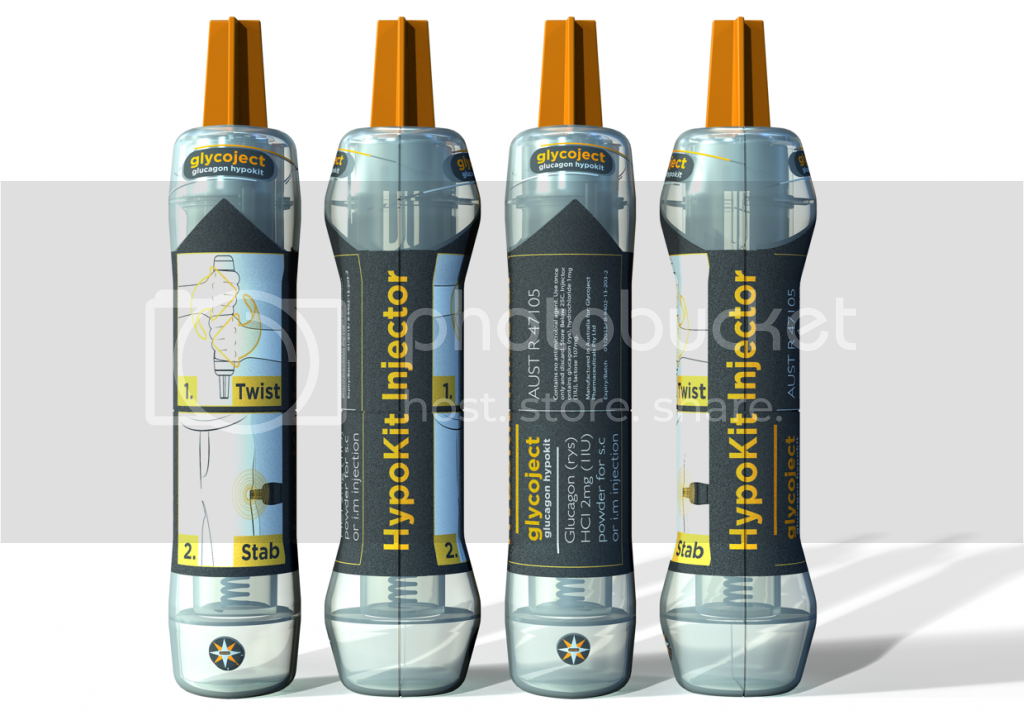 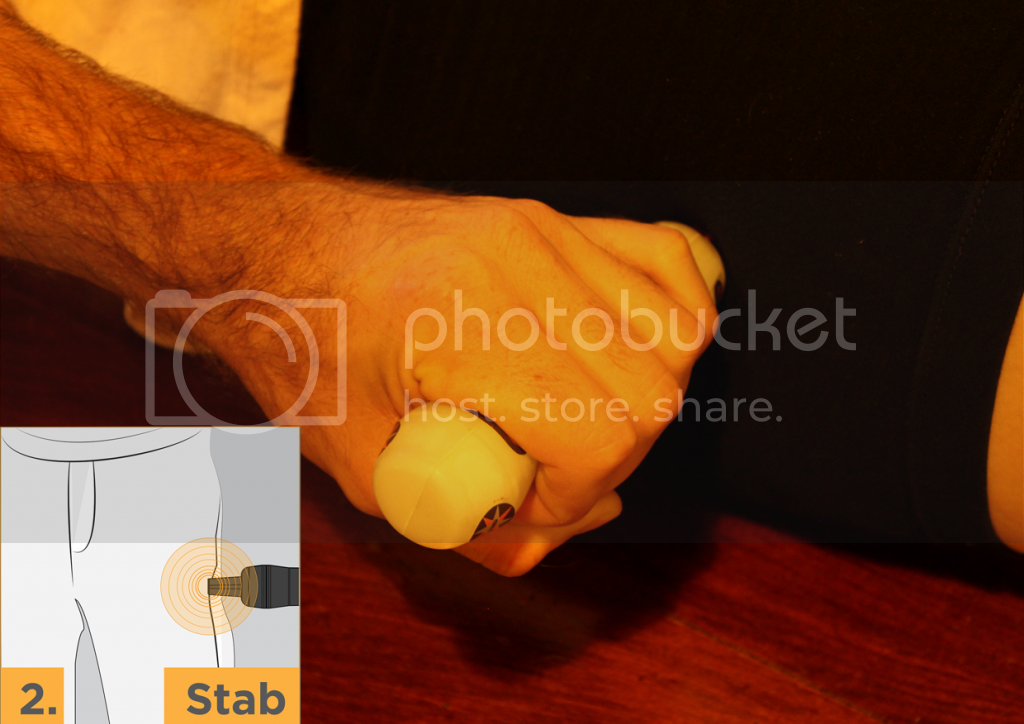 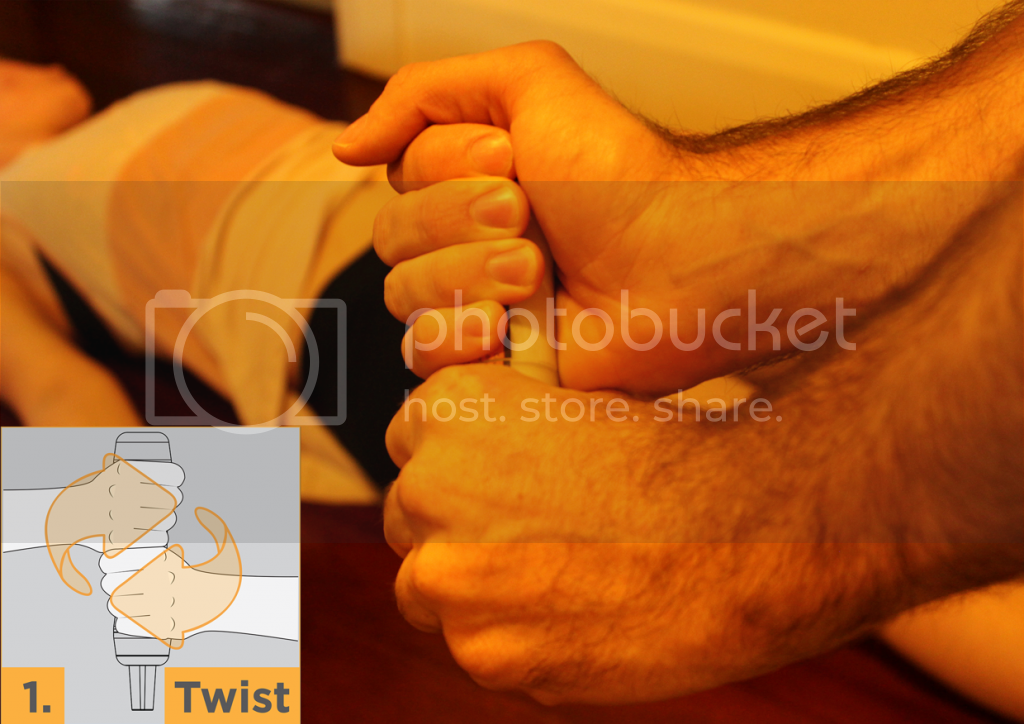 Packaging
I’ve begun to look at concepts for packaging the device. It is not a point of sale item with this product, and attempts to use a minimal quantity of material. 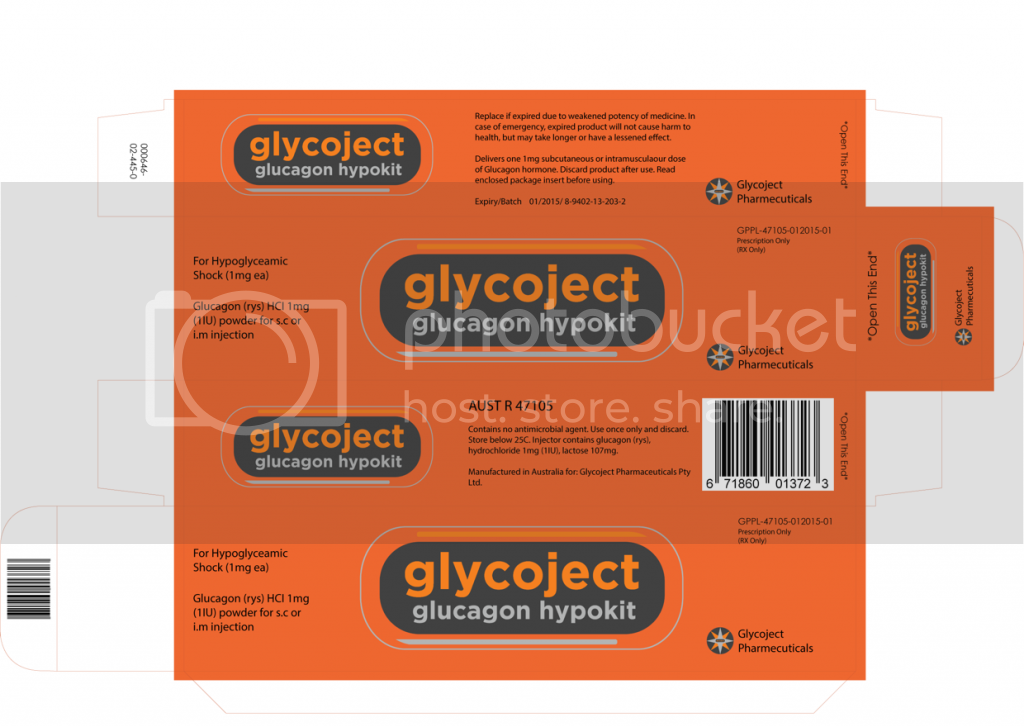 Congratulations on the work and short listing to the Design Awards (25 years old and under, what a crock!):
http://www.hillsdesignawards.com.au/entry/hypokit-auto-injector/

Some photos have a real yellow-ish tinge. Lots more good detail here than when I saw it at the grad. show.

Too bad about the under 25 part. I hadn’t noticed the yellow tinge with my screen, cheers for pointing it out. Ill have to take some more photos when I get my prototype back from Good Design Australia. (It really does need someone with nice hands to be in the photo as well)

I should have some more progress up soon.

Nice work and through process.

The final models, and visualizations are very nice.

I think the weak point is the sketch quality. In the ideation sketches it is OK (not great, but OK for this stage) but when you get to the image of the final 4 concepts the sketches are not as strong as they could be.

I’d also watch your phrasing at this stage. Instead of saying “based on popular opinion 4 was deemed the most likely to work” say something like “after feedback and consideration in review with my peers and professor I select concept 4 based on feasibility and usability.”

Nice work! I had a phone call over the weekend with someone looking for something like this. I worked on a similar product about 5 years ago and I was surprised that nothing has made it to market yet.

I like the twist and shake steps but “Stab” is a pretty aggressive word. I imagine it is hard to find a proper word that provides an adequate but simple description of the process though. Perhaps “Thrust” or “Drive” might get the message across while seeming a little less violent.

Also you might want to include something (or be ready to talk about) what makes your device different from other glucagon delivery systems like GlucaPen or the Xeris G-Pen series. Neither have made it to market yet but it might come up in a chat about the project.

I completely agree that the sketching needs improvement. It’s something that I’ve been trying to work on every day before I go on an internship in June. Thanks for the advice on the verbal comm. side of the project!

I was also surprised that there wasn’t a more sophisticated HypoKit available, considering the context of where and why it is intended to be used.

Stab is a very aggressive word, but it also really impacts what to do for that step. I like the idea of something like “thrust”, or even more basic like “push” or “press”, it really needs to be a balance between directly communicating the function without intimidating the user. I initially looked at just having the pictorial images without the text to make it as universal to use as possible, but I kept them as a redundant back-up.

The difference between the other products, from what is available online:

GlucaPen
-Primarily its’ small physical size. The end cap that requires twisting is therefore also very small, and has a small surface area to grip onto. Everything needs to be easily usable while panicked and possibly with shaking hands, which is generally not very easy when using something small and fiddly. It might even need to be used with gloved hands for those of you who live in cold climates, or by someone who doesn’t have full movement of their fingers. From a visual perspective, the larger device allows for bigger and more visible instructions.

-The resemblance to an Epi-Pen.There is also a tendency for injector products (EpiPen, Insulin, GlucaPen) to look slim and pen like, hence they look very similar. There should be a way to quickly distinguish one from the other; form, colour, label, size etc. This also leads to “How is it identified as a Hypokit?”. Neither of the other two clearly say Glucagon Hypokit, or even mention being a Hypokit at all on the actual device.

-I have been looking at the cartridge that they use however, as it is exactly what would work in my device. A reasonable proportion of the project was getting the internals to work (theoretically) for the sake of being innovative, and how it would be produced and put together. Using something that exists for the internals would let me focus more on the usability and instructions, this is the direction I’m looking at heading in.

Xeris
-Uses a new, stable form of glucagon. As far as I’m aware, they haven’t managed to get the pharmaceutical side of it working yet, and I wanted to use technology that is available now. It kept the project grounded, otherwise there wouldn’t have been a lot of substance outside of the verbal discussion. Once they get it working, it would need a standard auto injector style device without a mixing step. (Still a challenge, current auto-injectors still have their problems).

This feedback is very helpful, and thankyou for taking the time to look through and comment. I’ll hopefully be able to get some developments up soon.