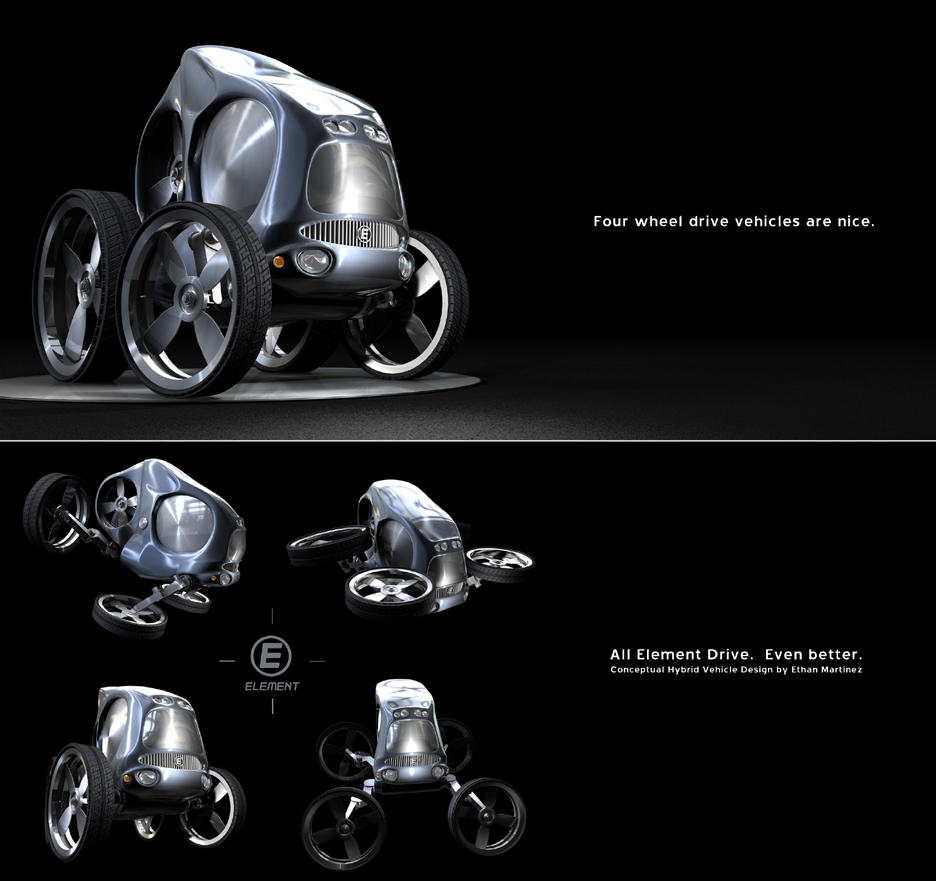 excellent render-head and shoulders above the rest here. Unlikely concept though. Seems highly unlikely that the wheels would generate the kind of lift/speed required to fly. It could work under water but not in the air

Renderings are nice, but i dont think it is enuff to save your concept.

try dropping the flying functionality and focus on that submarrine shit, its kinda fresh.

i would then alter the astetic to look more like a marine vehicle, it kinda already does.

you could also play up the propeller form on the wheels, thats working somewhat, but i think it could go further.

MB, I agree that the flying feature is very improbable. My initial response to the project descrip. was to combine as many features possible into one vehicle. I may have got a little too ambitious with my design.

Gouache, thanks for your ideas. My brother (being one of my biggest critics) noted that the wheels were “sucky” and that they looked like wagon wheels from the old west - gotta love sibling honesty. If I were to redesign this I would definately start there and then make alterations to the hull. Fact of the matter is that this is a closed and graded project from my 2004 fall semester so I won’t be working on it any longer. It’s an oldie but fun to look at so I wanted to share here.

Thanks for the crits.

Consider having ‘shftable’ mags if you’re going to re-design the wheels.
They have to angle the ‘petals’ for it to be like a propeller when it floats (air or water). and circular saw-like when on the ground. So that they don’t PULL/push perpendicular to the driving motion (they would put a lot of strain on the axels i think)

I agree… do more with the submersible stuff. You never see that. Also, seems the most possible… at least for Roger Moore.

aesthetically interesting. but looks dented to me. and heavy. heaviness comes from all the not-matched surfaces… which also means it’s aerodynamically poor since your drag will be extraordinarily high as a result.

variable angle of attack wheel would be okay. but variable geometry skins on top of a rigid substructure would be better. or use a “metal muscle” material for the concept (usually a Ti alloy).

i played with similar ideas a long time ago. good school project. gets you to think. can always show a portfolio piece and concede what’s wrong and what you learned after the student work.