Hi All,
This is the first time im posting any of my finished work up here. I started working for hummel in Denmark a little over two and a half years ago and has been an awesome experience. Its great to work on indoor, football performance products as well as street fashion products. Its been a crazy time as I have been on my own here for two years and we took on a new designer 6 months ago which has been a god send!!!

Its a really small team and so if you need something doing you really have to get in there and do it yourself. Its an awesome learning experience however as we learn by doing. Trips to the suppliers in the Far East are the best learning lesson as when Im there I work mostly in the sample room with the pattern makers and get really hands on during the development phase. I would say im there around 10 weeks a year give or take.

I just thought I would just post a few pics of just some finished products. It was really hard at the beginning to figure out where to go in the street/lifestyle category but it seems to be developing pretty good so far… 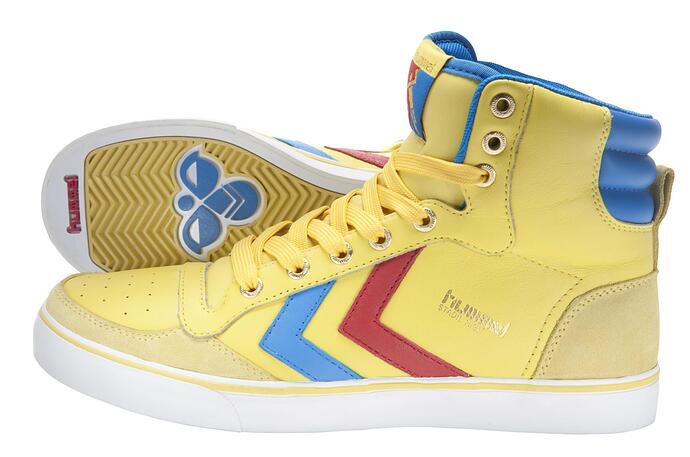 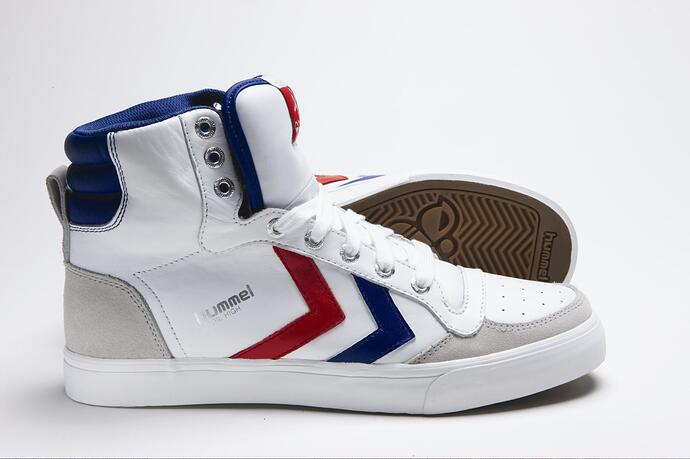 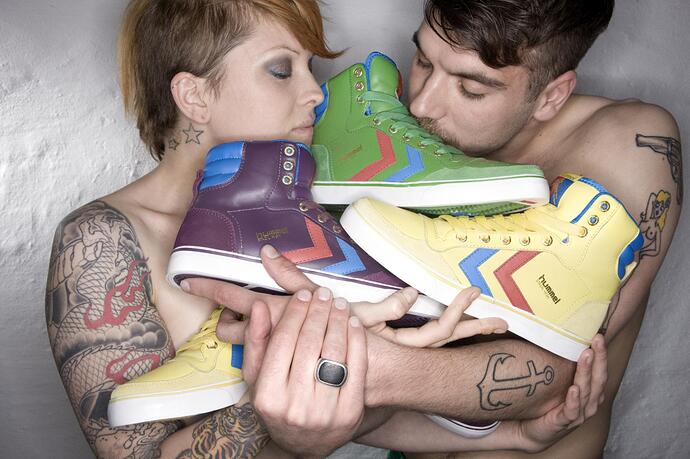 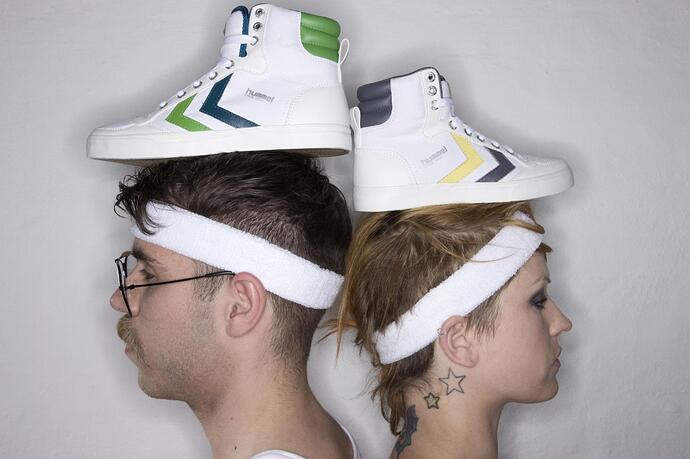 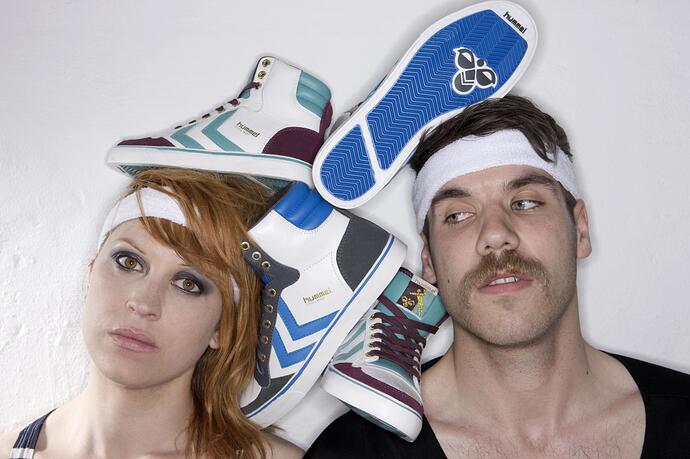 The thought behind this group was to take the silhouette of the stadil high and modify it. The last was adjusted to give a slimmer fit and then I modified all the proportions. Two extra eyelets were added and the eye stay is now wider, fox tape is more narrow. The chevrons adjusted, collar foam is a lot slimmer the outsole design shares the Stadil High design language but has been tweaked to become more refined. These pics are part of the SS10 collection 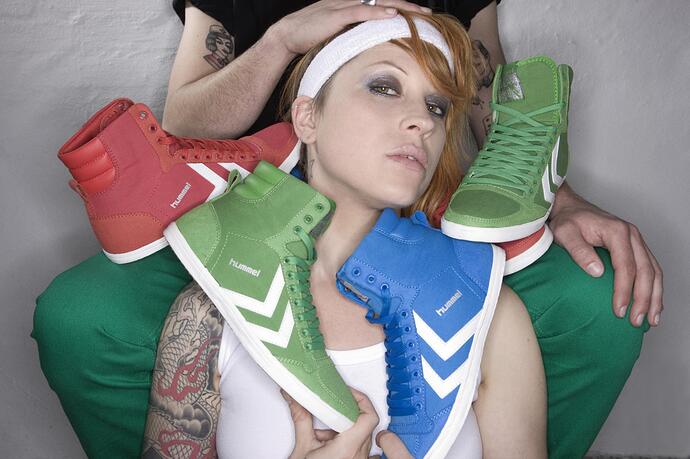 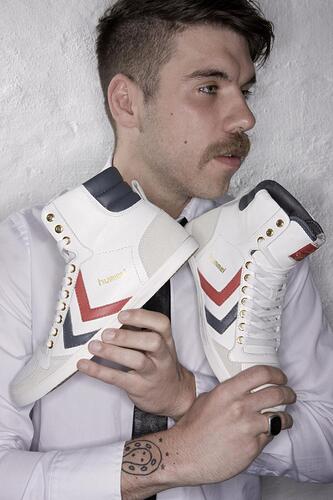 Fantastic stuff Noway, I love Hummel product but cant seem to find that much of it in the UK. I remember seeing Hummel’s stuff at BBB and really like the Hi-tops.
Keep up the great work
hotmix6

Yeah, saw the stuff at bread and butter in berlin this summer, but wasnt allowed to get a closer look. Sweet kicks from a far though!

Very interested in the brand, and its sounds great that youre enjoying it.

Thanks for the comments guys.

We will be at BBB in Jan, so feel free to drop by and say hi! We usually have quite an open stand and like to chat to everyone. Sometimes when the stand gets packed out, they are more selective of who they let in as it can be really difficult to present the collection to buyers when its busy.

Here are a few more pictures

I will try and find my original sketches and scan them in as well. 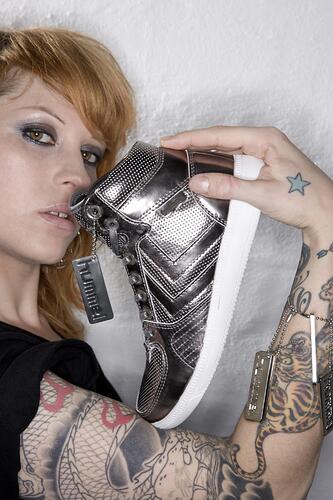 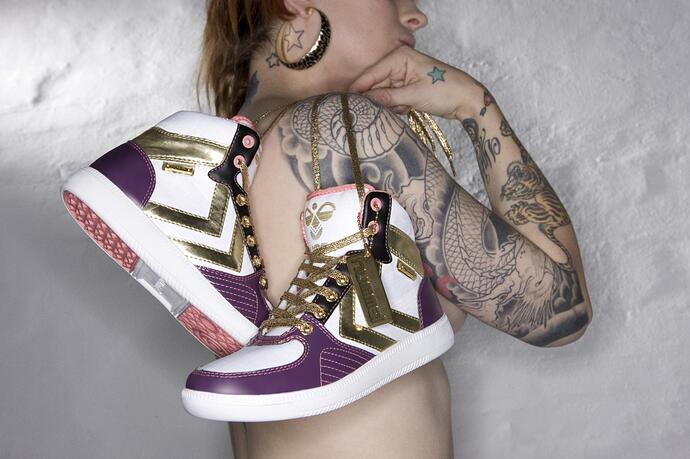 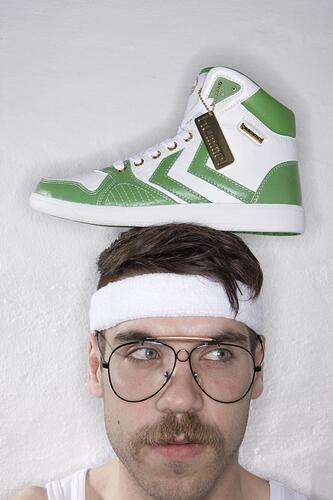 Just found scans of my original designs I used to send out to our supplier. I always draw scale 1:1 and from a digital outline of the last to ensure proportions are spot on. This really helps me to get back better pullovers.

I never used to do top views when I first started in footwear but quickly learned my lesson as when I started to do that the pattern makers loved it and I was getting back much better samples so it saved a heap of development time. 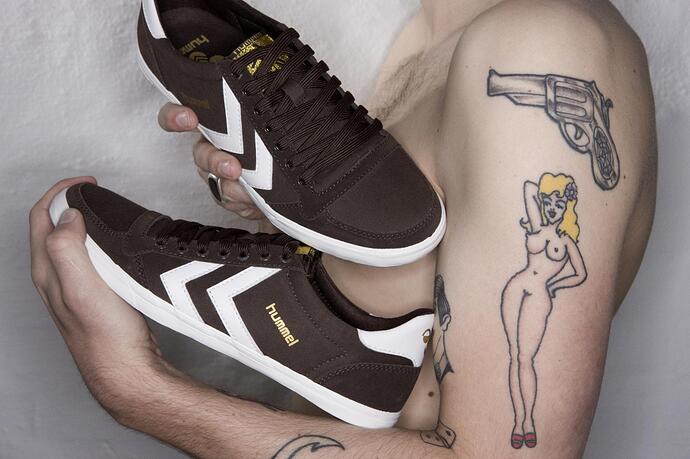 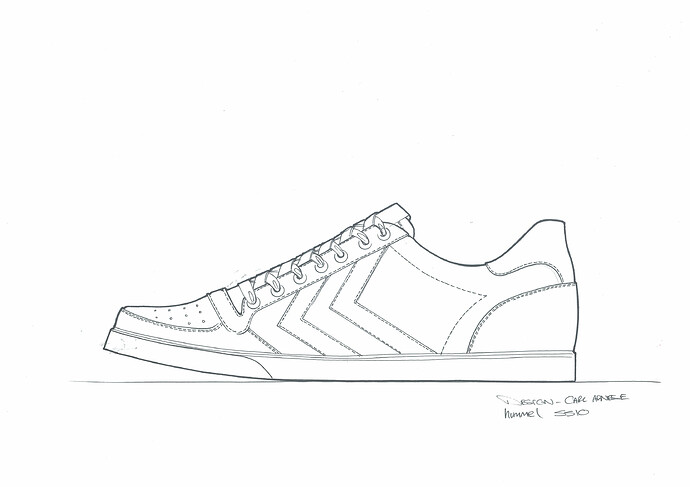 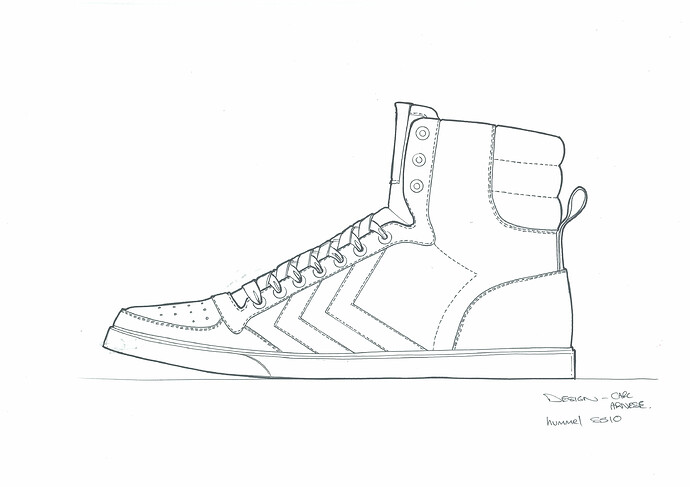 nice stuff, good to see a something different on the product photography…and the footwear is pretty smart too

Nice stuff! Good to see the Stadil model I recreated about 4 years ago is still living on in new ways! Love the high cut (actually originally proposed one with the low cut for FW06 (I think), it was but sales nixed it. The slim is also a nice touch in line with the adidas slim stuff from a few years back.

Sounds like you are getting a good chunk of experience at hummel. congrats.

Have you seen the original pic from one of the old hummel catalogs the Stadil pattern was based on? check it here: 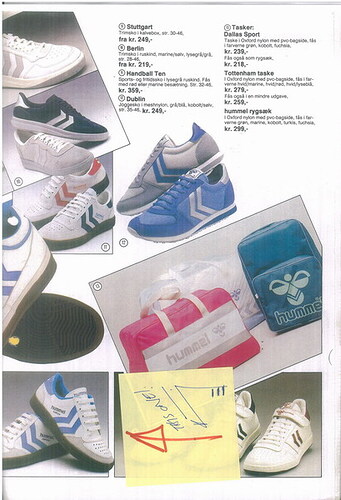 (hope the link works, blogger is a bit buggy).

Also, if you are interested, here’s the development of the first issue of the stadil.

PS. Like the new Stadil outsole much better than the vulc sole originally on it. Wanted to open a mould but had no budget at the time…

PPS. Say hi to Carsten, Christian, Soren and the gang for me.

Glad you like the new editions to the hummel family. Yeah I have seen all the pics from the old catalogues, I use them a lot for inspiration!!! For me its also super important to create products that have true hummel identity.

We are growing massively which is exciting so its nice to get investment for tooling which is why everything we do now is original. We did around 80 SKU’S this season + SMU’s for key accounts + 16 kids. And around 36 new indoor performance footwear (Will have to post some pics soon)

We made a few tweaks to the Stadil low as well when we changed the outsole we changed the inlay sole to be an anatomically molded EVA rubber (See pics). The construction is now strobal as well for flexibility, comfort and we saved approx 30% overall weight. We also managed to find a very good leather supplier.

The Stadil is a real Gem and we love it!!! So I hope to do it justice with all the new styles.

Its been a great learning lesson not only on the design front but also what the sales teams need in there respective markets so Carsten and I do a lot of travelling to key markets to see what is happening in there stores, where the products are being sold into. What they need in future to further grow there sales constructively and on a strict 1/2/3 tier system to make sure that we get in the right products into the correct accounts. We have just taken on a North American distributer now so you should start to see the brand around your end of the world which would be sweet. I know that they are working very hard and with what sounds like a solid strategy to introduce the brand to the USA. Its super exciting but a LONG way to go but we are very ambitious and the whole team is super hungry which is really great so see when were working so hard on the new collections.

Are you going to BBB in Jan? You should definitely drop by! Would be great to meet you. I must have just missed you last time. Plus as is normally the way you are always so sick of seeing the stuff that was out last season. We have SO much more to show this season. I will post them when they are public. 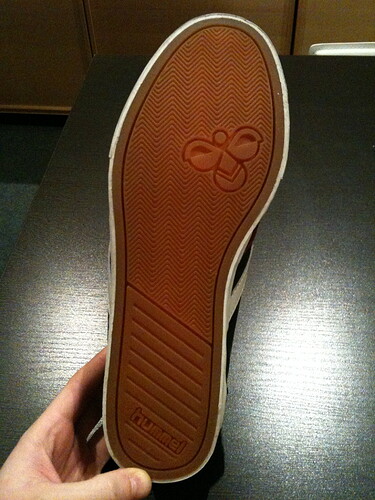 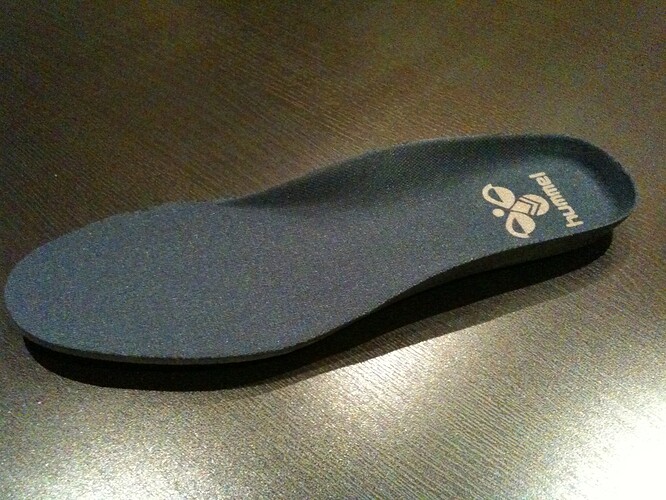 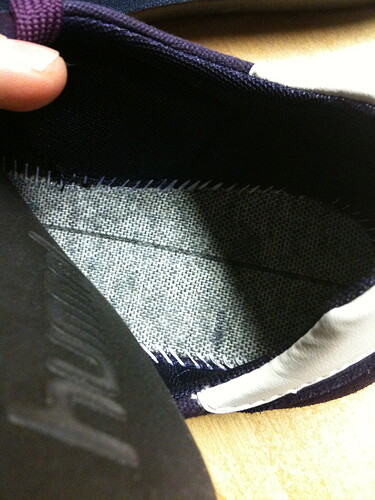 great job! I love those last three pictures, as they give a good insight into the products you have done. Great to see some real world examples on here! good post.

Got a hands on look at the Sadils today (i assumed it were the latest ones), must say i löve the proportions of the outsole. Looks very sleek and slick. great job once again

Thanks for the kind words, It means a lot. It great to hear that you have managed to get your hands on the shoes. Can I ask which store you saw them in? We have a super close relationship with our sales guys over there in Sweden. One of them came from building up the Fred Perry footwear business (sales) in Sweden from scratch to huge volume in a controlled and sustainable manner. Its great to work with shoe specialists in sales to really understand what its like from there side, and how a collection needs to be rounded in all aspects for it to grow and become more successful. Im guessing you saw them in Nilson?

Wow, if hes the guy who was responsible for all the fred perrys I see in Sweden, he’s definately skilled … Good catch. Also saw that Hummel is sponsoring a big show over here called “vem kan slå Philip och Fredrik”. Hummel on all contestants from top to bottom, so there certainly some presence building up.

Anyway, to answer your question.
I saw them in a store called Pavement. Its a youth lifestyle store in my University town, Lund.
They had quite a big selection of your stuff there.

Wow, if hes the guy who was responsible for all the fred perrys I see in Sweden, he’s definately skilled … Good catch. Also saw that Hummel is sponsoring a big show over here called “vem kan slå Philip och Fredrik”. Hummel on all contestants from top to bottom, so there certainly some presence building up.

HI, Yeah I heard about that show. I think Our guys out there know the guys who are behind the show real well and they managed to sot that out. Pretty good as its on prime time telly in Sweden.

Anyway, to answer your question.
I saw them in a store called Pavement. Its a youth lifestyle store in my University town, Lund.
They had quite a big selection of your stuff there.

Nice, I havn’t heard of that store actually. We went over to Sweden a while ago to see the stores and get to know the market better. We also met some buyers to hear their insights, feedback and SMU wishes. In one of the stores we went to we had a 90% sell through within one month for the stadil highs so its something that seems to be received positively in Sweden which is real nice.

I Just thought I would post some pics of this SMU I had the opportunity to design for the crowned Price of Denmark. He wore them to an environmental meeting in Greenland. I’m still waiting for the pictures. 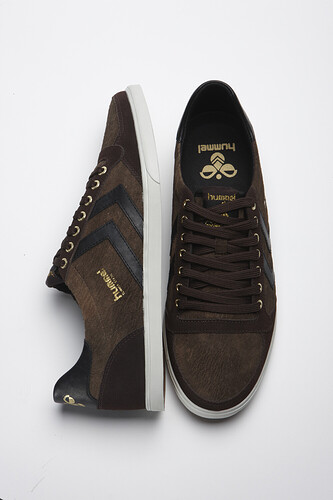 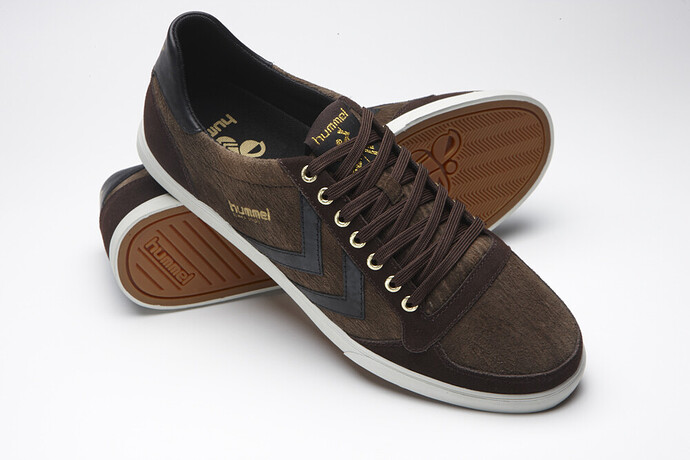 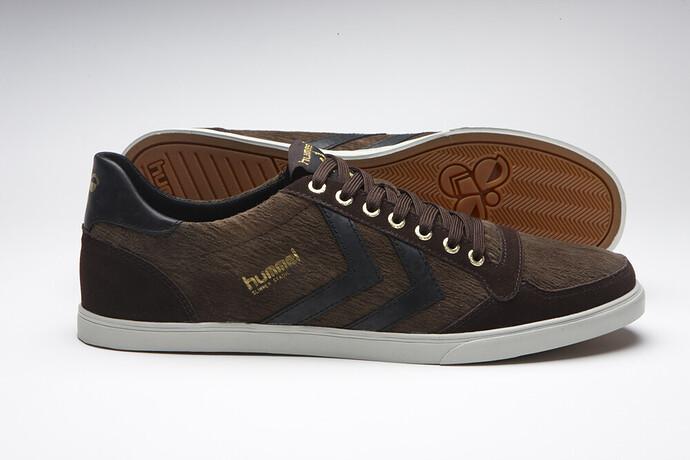 Hey wolfman!!
Its not Barkcloth but that is a super interesting material!! never heard of it before.

Its actually Shark skin believe it or not.

The reason we did this special one off pair for the crowned Prince of Denmark is that he was attending a event where he had to go to Greenland and discuss there economy etc… one of their problems at the moment is the Greenlandic shark. there are too many of them and it is a big problem for the greenlandic economy as they are disrupting the balance of their way of life.

They depend so much on the fishing in their waters that they need to monitor the level of sharks to maintain a balance. They have a scheme where they control the amount of shark they catch and then use 100% of the shark for all kinds of medical research ect… at first I wasn’t too happy about that

There are so many ways to tan and treat the shark skin to get different effects look and performance wise. Pretty interesting to work with something a little different.