Check out this amazing and inspirational feat of engineering called The HumanCar. A human powered car that is, I am sure, inspired by the famous foot powered Flintstone mobiles.

It apparently can reach speeds of 80 miles per hour (128.75 Km/h) and is designed to make driving a participatory experience. The four riders need to work together to get it going as well as steering by leaning into a turn. A rechargeable battery and motor, jumps in when you feel like taking a break.

Though it is safer than a bicycle, due to its road safe impact resistant skeleton, I do wonder about its ability to be handled by one person, its lack of seat belts (80mph come on!), and weather protection. Regardless, it is a marvel of engineering especially with the way the rowing movement is converted and transmitted to the carâ€™s forward motion.
\ 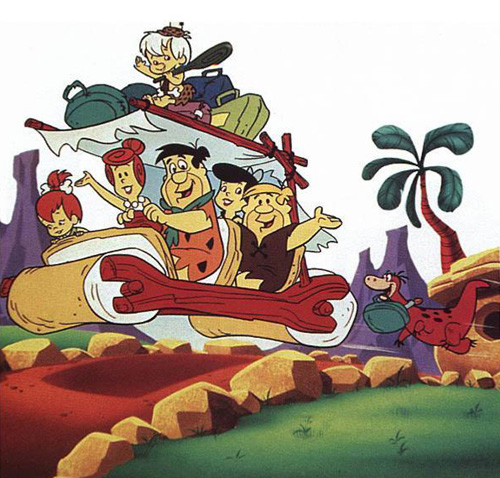 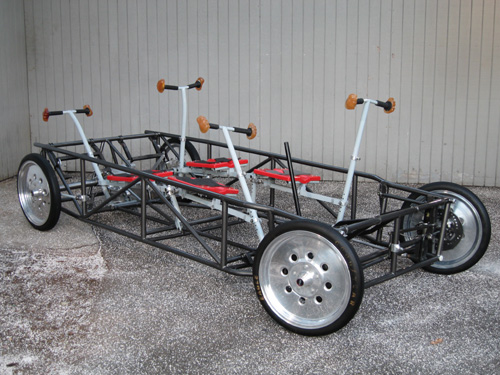 That doesn’t look like anything I would feel safe at 80 mph on.

At Turn, back passengers have to bend in opposite direction to that of driver & co-driver.

this should not be consider as carâ€¦…

check this one out:

I saw this thing cruising around Minneapolis a few times last year.

There doesn’t appear to be a table to set your beer down though.

I would like to see some sort of handle or grip for the riders besides just a ring. Although simple, it seems like it could be a bit uncomfortable. And at the least add a beer holder, I mean cup holder.

Maybe we could set up an IDSAMN event this summer where we test out these vehicles and post some results, would anyone like to go bar hopping on a bicycle bus in minneapolis?

Ya know, at first I was going to post a jaded image of the type of pedal cars I had when I was a kid … and then I came across this pedal car. . . . an Autounion Type C … . designed and built by Audi … .

This one is for family…
http://www.portlandground.com/archives/2006/07/family_in_irvington_out_f_1.php 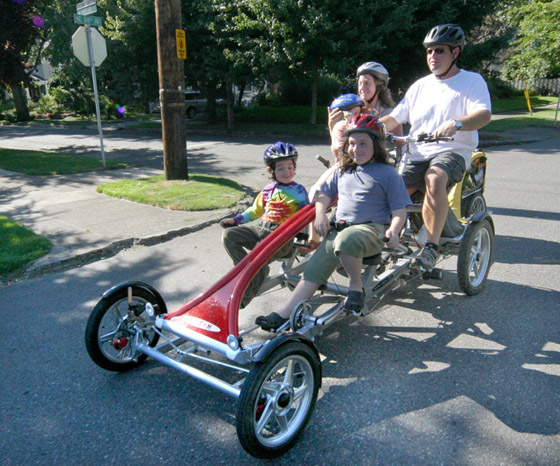 80mph! I don’t think so. Okay, maybe downhill or downcliff. Now the first one below can go 82mph. Or for the practicality of three wheels, the last one has gone 62mph. Just like with boats, smooth is fast. 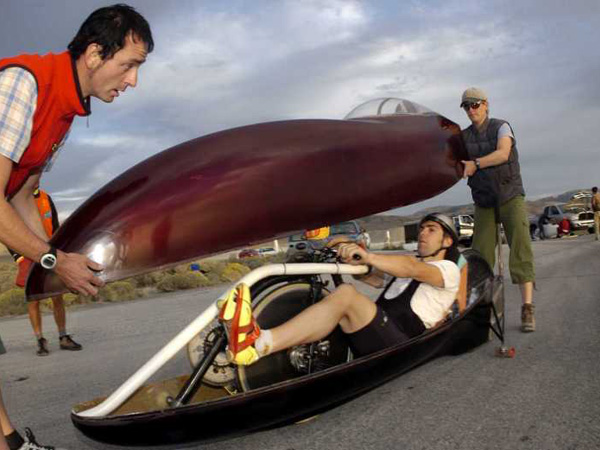 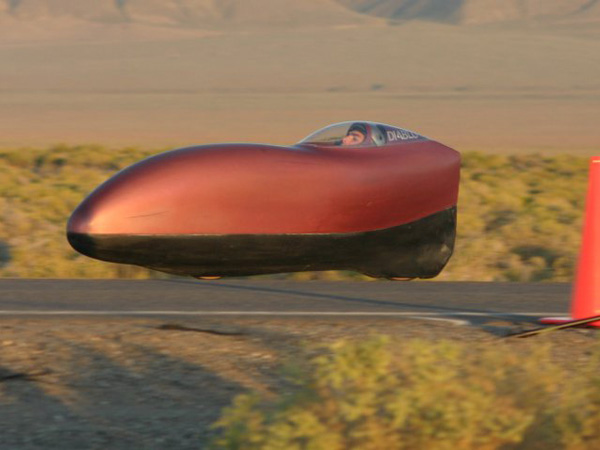 World’s Fastest Self Propelled Kid…???
place 16th overall out of 26…the competitors in this category were all serious adults…

The problem with these 200 meter speeds is that they really cannot be sustained past 400 meters.

It’s more interesting to see that the one hour record is almost 85km/h. When you consider that typical Tour de France time trials are around 50km/hr thats a pretty huge difference in equipment, even considering that the IHPVA records are all held by elite athletes. Both Sam and Fred have been members of their respective national time trial teams.

The obvious question is: what about us mere mortals.

Well, I’m not an elite athlete, but back in 1992, I was good for about 40km/hr on my half-hour work commute. During that spring, I had a test ride in the brand new Baby Varna at Georgiev’s “lab” on rural Gabriola Island. This was a tricycle with 2 rear wheels. As typical of the Varna, it was front wheel drive and had an amazing cable actuated steering mechanism. The “handlebar” was actually a shift lever that turned the front wheel maybe 10deg either side…

Anyway, I was given the instruction not to push it, and we set off with my recumbent mentor Paul driving his little truck with George shotgun. The roads around Gabriola are hilly with twists and turns, good for maybe 50km/hr in that truck. Perfect for testing a machine intended for road racing, not sprint traps. So, of course, I couldn’t help myself. When the road took it’s first dip, I kicked hard, not realizing that they couldn’t keep up. After 15 minutes or so, I stopped at the bottom of some unknown driveway. After may be 3 or 4 minutes, they showed up and helped me out. George was a little annoyed. He had wanted to see how the machine handled, so I mentioned that it was a bit too much oversteer. Paul said they lost me on the first curve after the downhill and didn’t even see me climbing the next hill. Now there was no speedo on the bike, but in our discussion, we figure that I had 3 minutes on them, or about 12km/hr faster than the truck. So for those 15min I’d averaged at least 60km/hr.

I never did get to ride the thing at the IHPVA in California but Sam did in his debut. They say he did 55mph in the traps when he crashed it. Spectacular end over end. Rolled a couple times before coming to a halt. His injuries? All mental… never could get it back up over 50 after that. Yes… the machine survived to keep racing. They polished up the paint best they could and got the spare lexan canopy out. How? Kevlar outer layers and carbon fiber inner layers.

So, for a short time, I was better than a car. 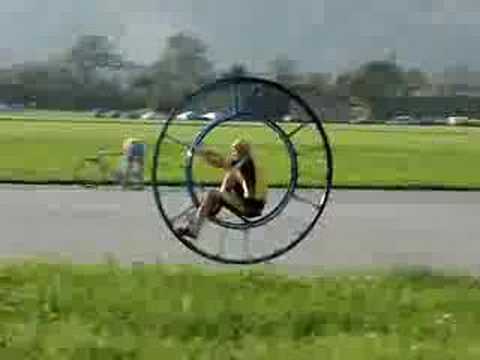 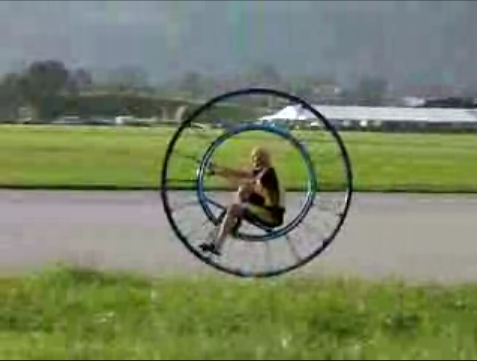 It’s always hilarious to see what happens when a speeding monowheel rider hits the brakes. At some point, they all realize there’s a good reason to have more than one wheel.