How to lose another billion dollars 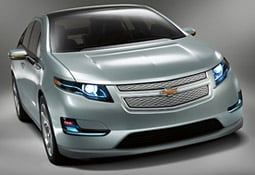 I was getting so pissed off about reading about how the wonderful, far-sighted Toyota is the only one who understands technology," the storied 77-year-old executive [Bob Lutz] recalled in an interview last month with Automotive News.

But winning corporate approval for the Volt was a struggle. When Mr. Lutz proposed a plug-in, other GM executives flashed back to their painful – and costly – experience in the 1990s when they dashed far ahead of the industry by creating and marketing the EV1 electric vehicle.

“One senior executive, senior to me, said, ‘Bob, we lost a billion dollars the last time we tried that. What do you want us to do, lose another billion?’” Mr. Lutz recalled.

You mean WE’LL be losing it.

From the comments, I know technically, the volt isn’t the same kind of hybrid (more electric than gas) but the comparison for consumers will be a tough sell.

Late summer/early fall of '09, Lexus is introducing the first luxury sedan hybrid, the HS250H. Over the weekend a Lexus dealership indicated the entry price would be between $35,000-$37,000. Which hybrid is more attractive? A Volt? Or a Lexus…built with the real world experience of Prius behind it, then combined with the Lexus reputation for quality?

Even though I’m a part owner of GM… I’d buy a Lexus any day.

Uhh… what? Didn’t they start selling the LS hybrid like two years ago? Pretty sure it was the same year they started the RX hybrid.

This would be a luxury prius though. The LS600h is like 100K loaded. And the RX is close to $50. Granted the MPG is not close to the prius, but I"m guessing the Lexus badge doesn’t care.

I dont understand the point you are making. Plug in hybrids are a good idea. Hybrids right now are more electric assisted. Plug ins are more gas-assisted electric car.

BBC NEWS | Programmes | From Our Own Correspondent | Revving China's auto...

The BBC's global business correspondent Peter Day test drives the BYD F3DM electric car on a visit to China and is surprised by the pace of change.

http://money.cnn.com/2009/04/13/technology/gunther_electric.fortune/
Obviously the problem is cost to manufacture. If BYD and Nissan already have production vehicles with Nissan planning for a 16000 USD price, it sounds like a case of not having a good sourcing/manufacturing process. I wonder if Lutz was planning on using their Chinese facilities or US factories? They might have been more successful starting out a completely new team in China sad to say.

The point is that a $40,000+ chevy (gas, hybrid, EV) is out of touch with the american consumer and the brand.
It is sadly, more of the same from GM. I would absolutely LOVE to buy a volt. I would LOVE to install a solar array on my roof to charge it.

I’m thrilled that the world is so excited and hyped about this car, but I think the sticker shock will squeeze much of the air out of it, especially if Nissan offers an all electric with a 100 mile range (!) for less. http://www.nissanusa.com/leaf-electric-car/

Talk about boondoggles…the first news item from that Nissan site:

Nissan North America, Inc. (NNA) today said it has been conditionally approved by the U.S. Department of Energy for a $1.6 billion loan to modify its Smyrna, Tenn., manufacturing plant to produce zero-emissions vehicles and state-of-the-art lithium-ion battery packs to power them