How to light a city scene in Showcase?

Since there’s so many Autodesk people here, I thought it would be a good place to ask:

I’m working on a city scene for an illustrative animation I’m planning to do using Showcase 2011.

The trouble is, it’s modelled in 1:1 scale (500x500 meters) and Showcase can’t seem to scale the environments up that large.

And if I reduce the size to fit inside an environment, the shadows from the buildings get really blurry, despite me maximizing the custom detail options in the ambient shadow settings.

Does anyone know how to get buildings to cast sharp shadows in Shocase 2011?

IGES file attached so you can try yourselves.

Zip file doesn’t seem to work for me.

Not at work today so I can’t say for sure, but this may just be a wall you’re going to hit with that type of geometry.

If you can get the zip file working I can see if I can play with it a bit.

You may have more success using raytracing for the crisp shadows, but if you’re doing an animation that probably won’t be an option unless you have a very fast machine and a lot of time.

I am wondering if you can calculate the ambient shadows with the object at 100% scale, and then scale the model down so that it fits in the environment? The shadows should stay baked but I’d have to double check that theory.

Hmm… I think you managed to try the file at the exact time of a small downtime of my host. Can you confirm that the file is unaccessible again, please? Otherwise I’ll have to try some public file hosting service.

And as you mentioned, using ray tracing mode probably won’t do much good for my animation deadline.

Perhaps I’ll have to live without shadows for this one… it’s impossible to get them for the vehicles in motion anyway, I suspect.

Today I found the option to create a scale independent environment from a HDRI file.

Sadly, the city scape didn’t even light up properly without shadows, and with calculated shadows… well, just look at the poor result below. And that’s with ALL settings for shadows maxed out! 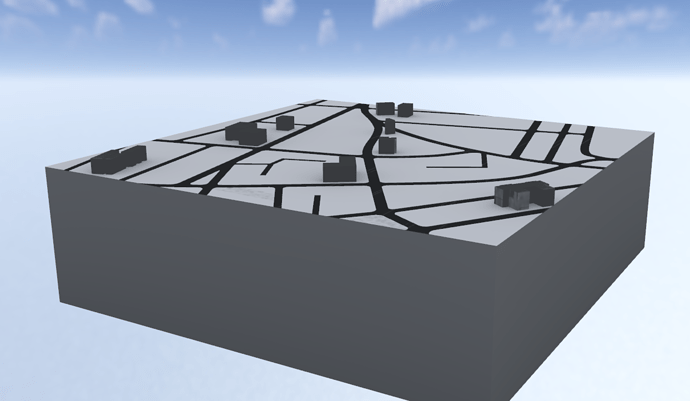 I didn’t have any issues scaling the original environments larger then the object. (Scene->Scene settings->Size of environment) then set the vertical coordinate below that down a bit so the floor doesn’t intersect.

I also didn’t get the splotchy shadows, but the shadows are not going to be crisp the way you have that modelled.

Ambient occlusion really isn’t a substitute for calculating lighting for a scene like that…you’ll always end up with diffuse shadows because it’s baking all the textures to an image with a max file size of 2048x2048. That means you only have a few pixels of shadow data per meter at that scale. (actually looks like less then that).

I uploaded my result by setting the shadow map resolution in the ambient shadows to 5.0 with 256 rays. You can try upping the rays to 1024 but I didn’t have the time to calculate that, maybe I’ll try it over lunch, but I don’t expect it to do a lot.

It’s really kind of a hacked up way around it. My other theory would be to take your city grid (right now it gets imported as one object) and experiment with hacking it up into smaller parts (like a 4x4 or 8x8 grid). Then import them such that each one comes in as it’s own object. This may let Showcase create more dense shadowmaps for each object (though you may get seams but it’s worth a shot).

Thanks for the attempt!

I’ll do my animation without shadows then, and still renders in Keyshot or Hypershot.

Oh yeah one other thing looking back at your original picture. When calculating ambient occlusion make sure you first set your normals so that all your objects are blue. It looks like your buildings came in backwards and thats why you got all the weird shadowing.

Nope, that was the first thing I checked.

I’ve seen, though, even with more “normal” models, that if you select a large amount of objects and calculate shadows, some will come out garbled, and have to be selected again and re-calculated to be fixed.

This is in the 2011 64-bit version, and regardless of accuracy settings.