How is this undercut achieved?

In products like these pitchers, it looks like the main plastic reservoir has an undercut how is this done? 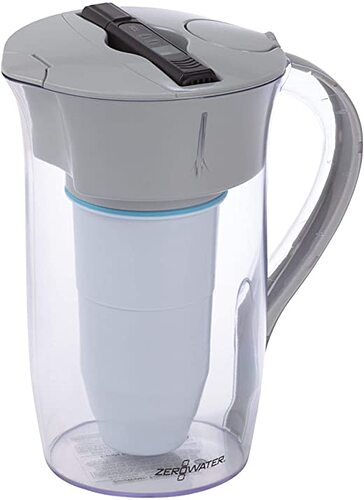 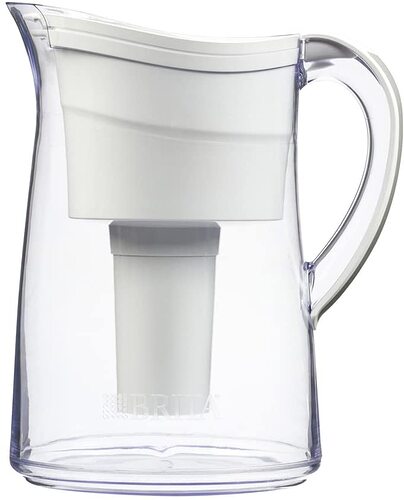 Are you talking about the main clear jug?

If so it’s blow molded so that’s not an issue.

If you’re talking about the top cutout it seems like something that is a simple slide?

Maybe just point to the area you have a question on.

I don’t believe the top image has an undercut, though the wall thickness varies, which may give it a slight hourglass effect.
My educated guess is that the bottom pitcher main body is two components; that is a weld line toward the base of the pitcher (red line in the attached image), where they attached the base cap (2) to the main body (1) via weld (sonic or spun?).
I think the tool marks on the interior of the body (blue line) indicate where the tool splits to avoid draft on the interior of the pitcher.

Also hopped on to Brita’s website for other photos, but looks like they’ve discontinued this product, and my guess, based on previous experience, is that the welded base created too many failures. And the fact that all of their current pitchers seem to be single component bodies… 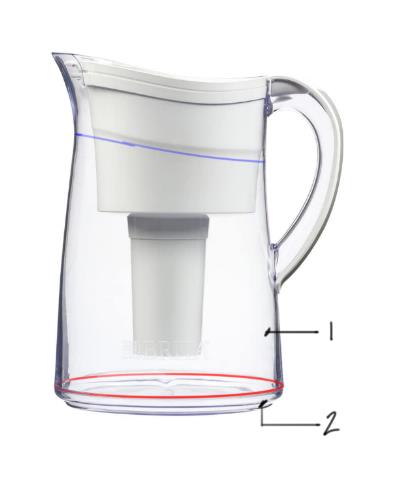 Are you talking about the main clear jug?

If so it’s blow molded so that’s not an issue.

My first thoughts were for injection molding with a collapsing core, but I guess injection blow molding could do it too. Don’t you need a more controlled (e.g. circular) aperture for the blowing however? Like the preform on PETG water bottles.

I think it’s very unlikely these are blow moulded. I’ve recently been working on blow moulding liquid containers and it’s near impossible to get anywhere near those levels of clarity. I am with Gilty on plastic welding as the answer.

I think it’s very unlikely these are blow moulded. I’ve recently been working on blow moulding liquid containers and it’s near impossible to get anywhere near those levels of clarity. I am with Gilty on plastic welding as the answer.

Yeah sorry you’re right, I’ve seen (opaque) examples of bucket like objects who trimmed back the blow molding entry, I was looking at the pics on my phone and it looked like the handle was one hollow part, I see now that it’s just a single wall with the outside handle wall snapped in. So yes, pulling it out the bottom seems like it makes sense.

Looking at the Brita bottle on an actual computer screen, it actually looks like theres a very distinct seam around the bottom. Is it possible that is just straight up two parts glued?

I think either way Gilty is right on.

Hard to tell without the part in hand. These photos may show lines that aren’t in the production piece and may hide other lines that are. I agree with the comment that the clarity is a give away that it is some form of injection molding. I would doubt they are welded, personally. Collapsible core is more likely.

I was speaking years ago to a designer of the first Brita jugs to have the undercut body and I am pretty sure they said it was made in 2 pieces and ultrasonically welded.

Now Gilty pointed out that partition line I agree, split-core injection mold and vibration welding the bottom.
Blow molding can result in similar constructions, sure but would likely lead to a weaker part.

A related process for ceramics is slip casting, pretty intriguing how it forms the undercuts for jugs like these. It’s almost like a very slow reverse blow molding where the material (slip) is drawn towards the edges.