How is a Verner Panton 'Topan Pendant' made?

I am doing an assignment for my materials and processes class where we have to find out the manufacturing process’ of various products.
I am struggling to find manufacturing information on one of my chosen products, it is a Verner Panton - Topan Pendant lamp shade.The lampshade is made from polished aluminium with a cream enamelled surface on the inside.
I am thinking it is spun moulded using a split part mould but am wondering how they would remove it from the mould, given that it would have “undercuts” trapping it on the mould. Could it have been “air-spun”?

Any suggestions on how it could be made would be great, these lamps were first manufactured in the 1960’s.

Probably a split mold like this from google book results on metal spinning.

Popular-Science---Google-Books-MetalSpinning.jpg411×862 214 KB
I also recall seeing diagrams of center offset, internal mandrels that only contact the working side and can be easily extracted.
Lmo March 22, 2011, 6:40pm #3

+1 for nxakt, that sounds about spot on

They’re mined from the earth, graded for correct size, and then polished.

Probably a split mold like this from google book results on metal spinning.

Wow that’s great Nxakt, so many possibilities with the mould having a core, thanks!

I dont have it with me the moment so i cant look but if you can get hold of this book I recommend it. It was like a bible to me during my degree.

Yea that book looks brilliant, our lecturer has copy which he showed us and recommended we get.

They’re mined from the earth, graded for correct size, and then polished.

They’re mined from the earth, graded for correct size, and then polished. >

No Paz … it’s a wise-a.ss response from a design professor I had years ago to a question that I had about a seemingly impossible manufacturing process; how were “undercut” details formed on a vacuum-formed refrigerator door-liner. I’ve used it many times over the years. Feel free to use it yourself any time.

In my particular case the question was how a 1/4" high “lip” that ran across the bottom of each shelf was able to be formed. In the example below, it is the egg-recesses; they are undercut from the direction of pull. A spring-loaded, flip-up section of the mold was the answer. Close inspection of the part will reveal “witness lines” of the joint in the mold. The section would flip-up when the part was pulled after forming; springs pulled it back down for the next cycle. 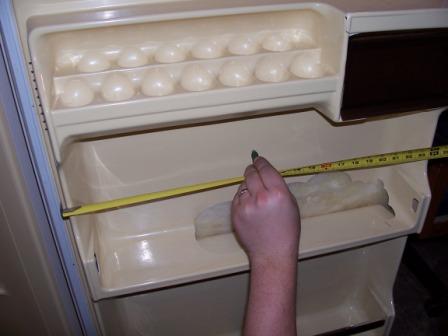