How could these have been made?

(found here)
Could everything be welded together?
I didn’t find a kink in the perforated sheet where they could have closed the sheet. 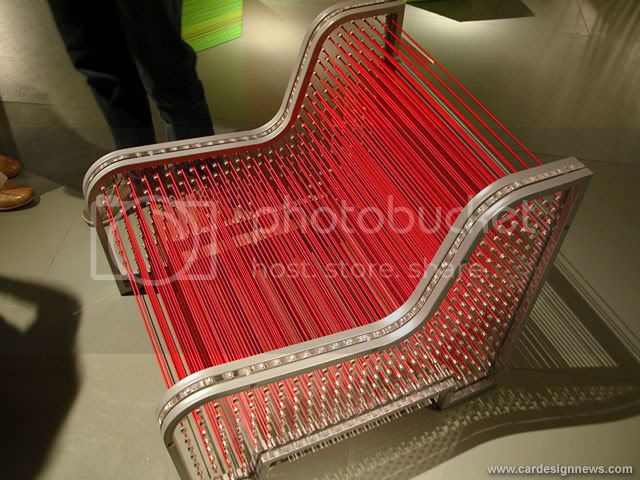 (found here)
How could they have attached the cords?

Top one is rolled, then stamped, it looks like Al so they can polish out the seam really well, and easly. the bottom is laser cut, and I need more pics.

I agree on the first one. Although, there may be a process to punch/laser cut a large tube like that, I could imagine, but I haven’t come across it.

The chair is laser cut acrylic (sandwiched between two aluminum frames) and the elastic bands are probably tied off or finshed in some way so that they are larger at the each ends. I could see this assembled with the bands threaded through the opposite plates flush together first, tied/finished off at each end and then stretched out and the middle stretcher bars installed. Can’t see what’s going on in the picture very well, though.

Top one: I’d say punched/laser-cut then rolled in halves or quarters. It’s nearly impossible to roll something that large in one piece. You could easily seam it, weld it, then grind out your welds. It’s some seriously thick plate, and it actually appears to be steel, the center could be stainless, and the outside is just plain carbon steel.

I know this may sound stupid, but at first glance I thought the second one was a rendering. The lighting and the materials just looked too perfect. I would also agree that the first one is made up of two pieces. More than likely it is either done in halves or quarters.

You could easily seam it, weld it, then grind out your welds. It’s some seriously thick plate.

I’d like to make something similar in shape but preferably with a thinner plate to reduce the weight.
I was wondering whether the welded junctions would be strong enough, both to close the plate as between the plate and the external structure.

As for the second picture; I’m waiting for cardesignnews to give me more information.
My main concern is to find a nice way to tie/finish off ropes. 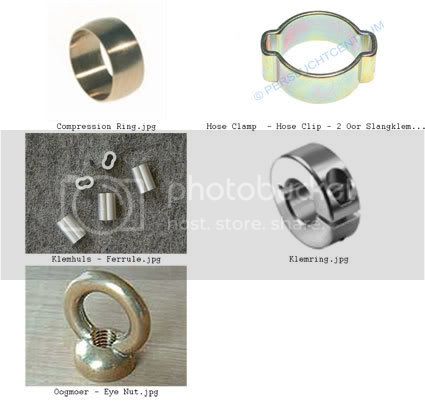 Problems with the above are;

Yes, it should be strong enough if you know what you’re doing. In some cases it may require a backer plate behind the weld, but not every case. Take a look at structural steel tubing… all of that is welded together, and it’s very very strong.

Outside steel or iron rings would be either flame or laser cut.
Roller screen is perforated then rolled, quite likely in smaller sections, 1/4’s or more.
A weld, properly done, is stronger than the base material.

laser drilling of decorative plastics is rare and not recommended. The laser depolymerizes the plastic and will produce a surface that over indeterminate time (weeks - months) will craze and crack. Also, any swarf produced inside the hole is labour intensive to deburr.

The part is most likely drilled to get all the rope holes. The milling machine setup to drill could easily also counterbore or countersink these holes to fit a rope thimble or ferrule.

laser drilling of decorative plastics is rare and not recommended. The laser depolymerizes the plastic and will produce a surface that over indeterminate time (weeks - months) will craze and crack. Also, any swarf produced inside the hole is labour intensive to deburr.
…
to fit a rope thimble or ferrule

thanks for the info, I know that laser cutting plastics like nylon/hdpe doesn’t work too well, but I didn’t know acryilc had these issues. In that case a cnc mill could easily create these.

I was thinking of making the wheel out of aluminum AW-5083 to reduce the weight.
(Physics questions)
But I was asking myself whether its natural oxide layer would be sufficient to protect it from corrosion?

Without some sort of adjustable tensioning, that chair will sag over time.
It would also be difficult to ensure they’re all tensioned to the same degree.

With the chair any use of crimps etc on shock-cord will lead to premature failure. Looks to me that the holes are counter-sunk and the shock-cord is knotted off with, of course, the knot sinking out of sight. There are scores of knots that are perfect for that purpose and even some really inventive machinery that can tie them.

I found a better picture and it seems they used metal bits.
I still wouldn’t know where to get them though… 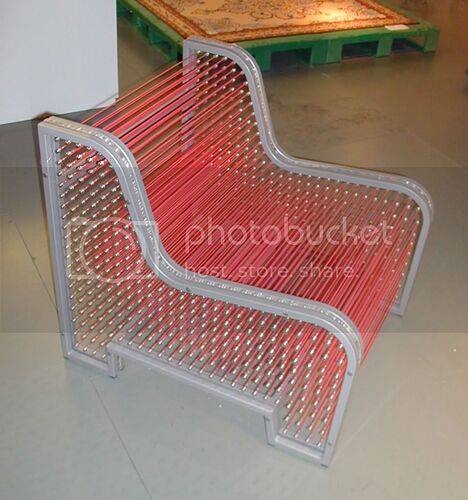 I still wouldn’t know where to get them though…

Buy them? You’re a designer… . . design them, and make them yourself.

I still wouldn’t know where to get them though…

Buy them? You’re a designer… . . design them, and make them yourself.

Wouldn’t that be a waste of money if they can be bought?
I’m also looking into solutions without bits at the moment.

That would depend upon how unique you want your product to be considered.

You are more than likely looking at a screw-machined part; the cost to produce them should not be prohibitive; you would have complete control (finish, color, etc.) over the piece, and your source would be guaranteed.

I would design for “machined” parts for prototypes and low-volume production, but keep in mind that details friendly to injection-molded “plastic” would be the most economical for long run production.

how about ball fittings?

Thanks, I also got this tip (p26 top + bolt) which allows the cords to be tightened with a bolt, the “elastic chair” on the other hand might suffer from sag with normal cords. But clamping several individual cords usually results in squeezed sections with different orientations.

So Iâ€™m planning to loop the cord using a combination of a few countersunk end stops (p61 bottom) and U-bolts + countersunk sleeve nuts; 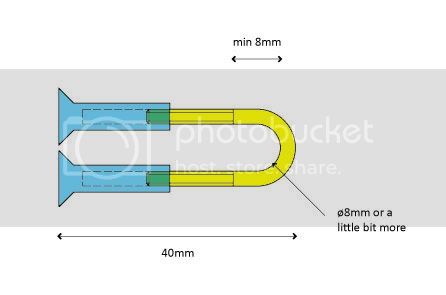 So far I only found countersunk sleeve nuts at Stainless Fixtures and Fittings - Anzor Fasteners New Zealand, but the above is more like an M3.

Oh and Lmo; I should have said that it is a prototype I am working on.

Do a google for “s e x bolts” and related hardware … no kidding, that is the real name for them; sometimes called a “barrel bolt”. Another similar fastener is called a “binder post(s) & screw(s)”; you see them on some hardback document covers.

The above happen to be “tamper-proof” (note one-way ramp on head, and the stud in the center that prevents access with other than a special wrench).
Different configurations are available, and either side is usually available separately.

If you weren’t dead set on the exact pattern in that original wheel, a VERY cheap way to recreate a light weight surface (allowing you had a firm frame and a very good way to attach it) would simply be chain link fence. You can buy it in huge rolls at any local hardware store, and simply cut it down to your width and run it along the inner surface.