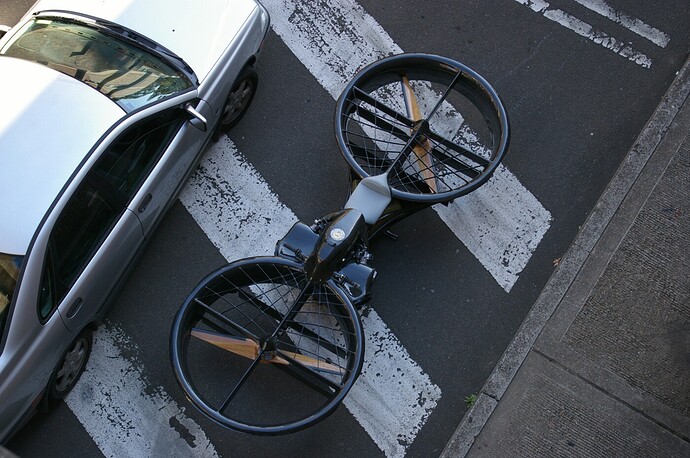 hoverbike_imgp3845_large.jpg1400×931 377 KB
For the flying bike dreamer that should live in all of us, and the lunatic element that actually made a prototype. He has my total respect in that regards. The spec page fails a little bit, seems a tad optimistic.

Working prototype, maybe not yet. I don’t see how any lateral stability is achieved and have serious doubts that it would fly untethered. Forward speed also seems doubtful.

I’m liking the fore and aft “strainers” on the fan ducts. May be lunatic, but at least there’s some forethought going on.

Mh, I am somehow not convinced that this is not a hoax.
On the website, there are picture of a hovering prototype but strangely not a video.

Basically I am calling all aviation experts here: Is this for real?

The hovering prototype is completely tied to the ground, which means all hes doing is sitting on a big fan that’s pushing up and that’s it.

The issue is what happens when you tilt and now that thrust wants to spin you upside down. It looks like he’s going for a good old fashioned 2 fin thrust vectoring system but I don’t see that working for more than 5 seconds before you fly out of control and kill yourself.

Something like this could potentially work if it had a LOT of technology involved. This is effectively what made the Segway and Stealth bomber work. Both are inherently unstable designs, but work by taking simple controls and connecting them to a very fast computer system with lots of redundancy. The computer detects the 100 times you are about to crash every second and makes small and invisible adjustments to the pilot/driver to keep them from dying.

It certainly works - and I’ve seen people trying to achieve very similar things with rocket ships, but it’s a massively complex investment. This right now looks to be more of a sweet science project, but the whole “not dying” thing is tough.

Remember the Icon plane? Sweet design, but that thing is still vaporware and it has had a lot of big backers and is a much simpler design (they’ve been making hydroplanes for nearly 100 years).

Martin Aviation has similar power/thrust size envelope to the hoverbike model. The magic of the jetpack design (or a helicopter for that matter) is that the weight is suspended below the force, acting as a pendulum and stabilizing everything. If the thrust center was horizontally inline with the center of gravity, nothing will stop it from rolling over. The hoverbike will tip over sideways in a body twitch or a microgust.

The carbon fiber vanes under the Martin Jetpack are key to everything. No need for tilting rotors.

Here is my illustration on a configuration that might work. The higher the rotors the better, but too high gets the pilot into the vectored airflow. 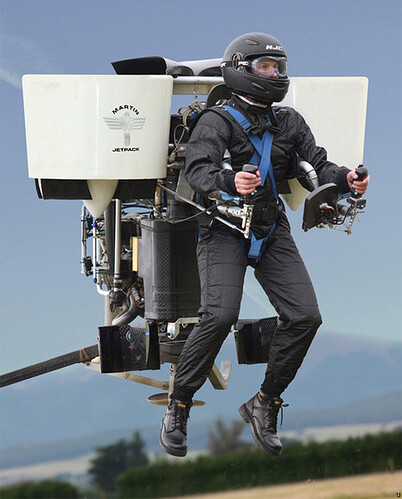 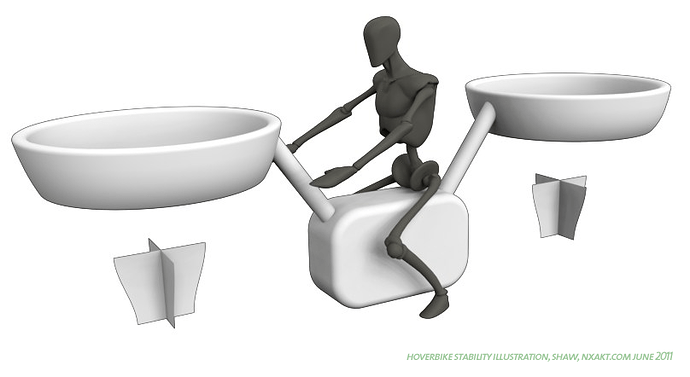 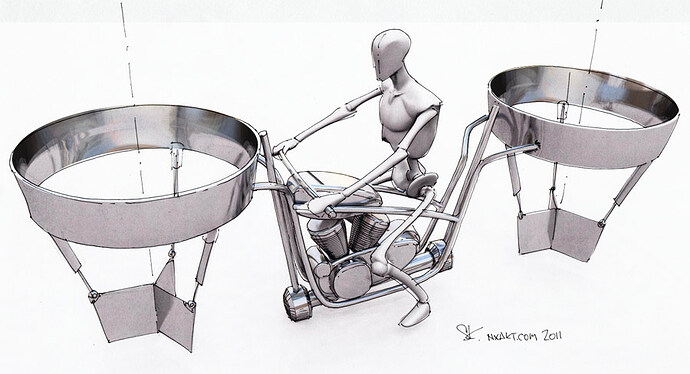 But either way there’s going be a lot of power loss from all that angular vectoring.

I think Wang Hu was on to something. 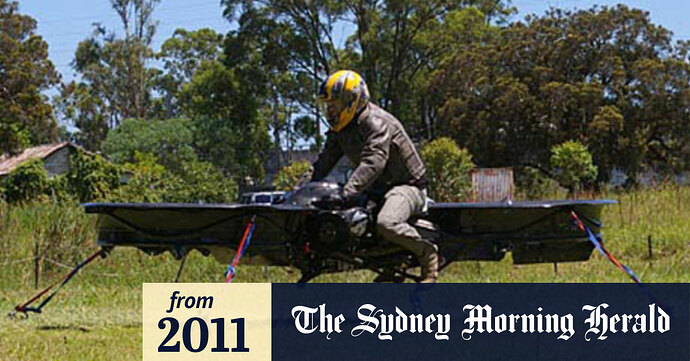 Meet the Australian-made Hoverbike - but can it fly?

Just like Back to the Future's Hoverboard, a Sydney-made Hoverbike could soon be what we're all riding to work. Made by an Australian man, the flying bike has a weight of 105 kilograms without fuel, its rotors are made of Tasmanian Oak and it will be...

Favourite quote:
"…Mr Malloy plans to unstrap the bike from the ropes that attach it to the ground ‘to see what happens’ "

I can’t see how it would have the power or work for the price, when something like this:

This domain name is registered and secured with Crazy Domains, a world leader domain name and web hosting provider.

With less weight, less thrust would be required, and depending on prop/fan design you can find 2 small fans that are capable enough to lift a person and small machine (like the jetpack that was posted).

But that still doesn’t explain how to make it stable or forgiving enough to ride without killing you. I also am not sure how he got his figures on range and speed…seems “optimistic” at best.

I understand the appeal of a simple design that resembles a motorcycle, but a redesign that puts the rider 90 degrees from where he sits now and dropping him below the fans like nxact’s sketch could still result in a cool design that works better. It could look like a combination motorcycle, ultra light and helicopter.

No time to sketch it right now.

Thanks for the heads up, noted.

I can’t see how it would have the power or work for the price, when something like this:

Agreed the helicopter is a better solution, however, the primal aspect of sitting on something and riding it cannot be rationalized.

But that still doesn’t explain how to make it stable or forgiving enough to ride without killing you.

Low CG for craft like this solves the stability, does nothing for the speed. His figures are way too optimistic. 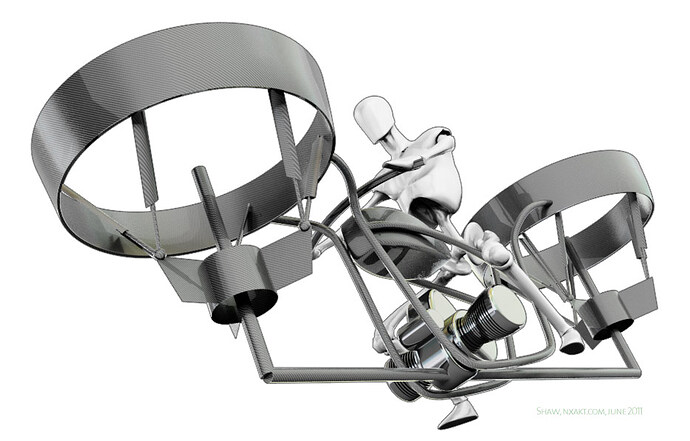 I’m wondering what’s going to happen if his “prime mover” conks out at, say… 600 feet altitude. Unlike a helicopter, this thing isn’t going to be able to auto-rotate to save it’s arse. And at 600 feet even a helicopter would have a hard time pulling it off.

Auto-rotation is how a helicopter is able to land when power is lost. As soon as the engine quits, and the aircraft starts to drop, the pilot pitches the rotor blades into a negative configuration so that the up-rushing air keeps the main rotor spinning. At the appropriate moment before impact/landing the pilot returns the positive pitch to the rotor blades and the inertia of the spinning rotor assembly supplies enough torque to provide lift and prevent the inevitable what-goes-up-must-come-down scenario from occurring.

Note: In this practice auto rotation approach the engine is still running, at idle. 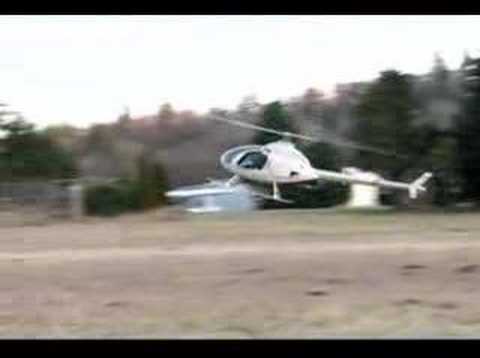 Nxakt: Wouldn’t it be possible to steer the motors like a vigorboard to achieve control over the steering? Guess it wouldn’t really be appropriate for the current setup, but to for a similar concept.

I like the “self leveling” cockpit module… but you have to ask, where is the engine and how is/are the fan(s) driven?

So the problem is … even if they were counter rotating fans, all that counter-torque has to go somewhere and it would more than likely just spin the cockpit module around inside the fans. 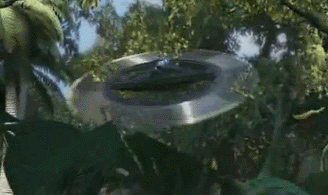