What do you guys think of Homeless designs that were showcased at the 2005 New York Safe gallery? I mean homeless people don’t have a TV, I haven’t seen one homeless person reading the newspaper besides using it as a blanket. How are they going to market to homeless people other than billboards which is a waste of money b/c out of how many homeless people have the kind of money to purchase something like this http://www.core77.com/gallery/SAFE%20-%20DESIGN%20TAKES%20ON%20RISK/29.asp?current_image_number=29&album_id=13&page_no=2&context_id=1&current_photo_id=1599.

I think the designers merely thought “what would I want if I were a homeless” instead of actually experiencing being homeless. Well, being in Detroit seeing bums on the street all the time, I really wonder where do they sleep in the bitter winters.

One thing I notice about the homeless is, even though some of them sleep at specific spots, they tend to move a lot, and when they move, they move everything they own with them. That’s a shopping cart load of stuffs. Imagine if they have to carry a shelter as well…

So, if I were to do it, I will either design a cheap and durable shelter on wheels that they can push around.

Or, design a sleeping bag-like shelter that will be easy to carry, even wearable so that it doesn’t get stolen by other bums. Wearing it can also help keep themselves warm in the winter.

On another note, many of them are actually on wheel chairs, so that needs to be considered as well.

Now, if this is in Japan, it will be a different story. Homeless in Japan can be anyone from a street bum to a company manager who just think proper rent is too expensive. I once read an article that in Osaka subway station where many of these “homeless” station at. They have an agreement with the station that they only set up their cardboard boxes ( which they sleep in) after mid night. So you will see a line of middle aged men, bathed and ready to sleep, standing along the walkway waiting for the hour to come. Then they make their beds and go to sleep. The next morning, they will be in suit and go to work like anyone else.

In this case, there’s much more to play with.

I wonder if anyone thought of turning those capsule motels into long term lease. Maybe these guys will consider that instead. 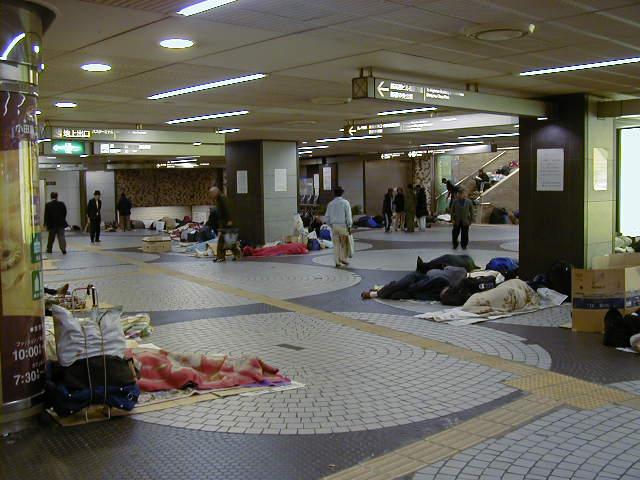 Yeah maybe they should market it as a homeless night solution, for the day to day homeless and the occasional homeless buyer.