I’m currently researching my dissertation and am hoping that some of you can help. Do you prefer watching films at home or at the cinema? If you could tell me the reasons why that would be even more helpful. Thanks!

It depends on the film. For 3D movies and other Blocksbusters, the theater, simply because it’s a better experience. For everything else, home, because I can drink there and the movies are free. Plus when my wife falls asleep halfway through, I don’t have to feel bad that it cost $30 to see some mediocre romantic comedy.

Ok I’ll bite. Some movies are worth paying extra to see on the large screen with the most up to date sound systems, and some aren’t.

Some movies are worth paying even more extra to see in IMAX/3D, I for one will be going to see The Hobbit in IMAX at the opener.

Theater experience also can have a lot to do with it. I remember when Star Theaters started opening in the Metro Detroit area and my friends and I would opt to see films there at a premium because the experience of the venue was more Hollywood, more red carpet. At blockbuster openings they’d shine the search lights, they had a mini food court offering, valet parking, and it just felt more “Holywood theme park” than movie-house. Somehow, this all brought celebrity to the forefront and added to the outing. It also didn’t hurt that they had cool movie memorabilia displays in the halls leading to theater doors. One that stands out is a Ghostbusters outfit display.

Many view movies as an escape, if the venue can further that sense then it is a really fun experience. How many people catch themselves imagining the 40’s Holywood era while watching that 3D animated 21st Century logo with the spotlights?

And while I’ve noticed more and more theaters offering VIP theaters with waitstaff and alcohol licenses this is the exception not the norm.

Lots of people enjoy watching movies with a couple hundred people, the shared laughs, screams, and tears is another reason people like to get out to the cinema. I think this could be taken further. All venues politely ask patrons to switch off their cell phones, but I see a lot of potential in coordinating a live ticker feed on the screen where people in the theater can make commentary during a film, this could be a fun interactive way to engage audiences, perhaps even with a sketching overlay.

I havent been to a theater in a long time. However, I will agree that there are certain films that are better for the big screen. Any film relying heavily on the visual element will be best in IMAX/3D. The vision aspect of films is still outside of the typical consumer reach as far as bringing it in home. However, it is coming closer as the cost of projectors/screens continues to drop. The audio aspect is much more obtainable for the consumer. My ‘theater’ is set to THX level standards, which is what most theaters use. As Dolby Atmos gets rolled out, this may become another feature to bring people into the theater. But you can get fairly close to the theater sound for under $1500.

The real reason that I do not appreciate the theater is the other patrons. I dont know if Im just too picky, but I always seem to be seated next to the talker/loud popcorn eater/texter/ person who pees too much. It really takes away from my experience. At home, I can lay on the couch, drink as many beers as I want, and not have to worry about anything other than the movie.

I see a lot of potential in coordinating a live ticker feed on the screen where people in the theater can make commentary during a film, this could be a fun interactive way to engage audiences

The real reason that I do not appreciate the theater is the other patrons. I dont know if Im just too picky, but I always seem to be seated next to the talker/loud popcorn eater/texter/ person who pees too much.

You’re probably one of those folks who sing beyond their range at the top of their voice when attending a concert… I’ve always hated that (well at least since I out grew getting fk’d up to go to concerts). I prefer to hear (or see, in the case of film) what the artist/director chose to present, rather than what the audience can make out it. Save that for the DVD version in your living room.

What if the audience, by vote during several key moments, could choose the plot direction of the movie. I think this could work great for a comedy!

Anyways, I prefer watching movies at home mainly because the smell of theaters reminds me of what it smells like in Chuck-e-Cheese.

Not exactly the Tinseltown Grauman’s Chinese Theater image they’re selling us, is it? 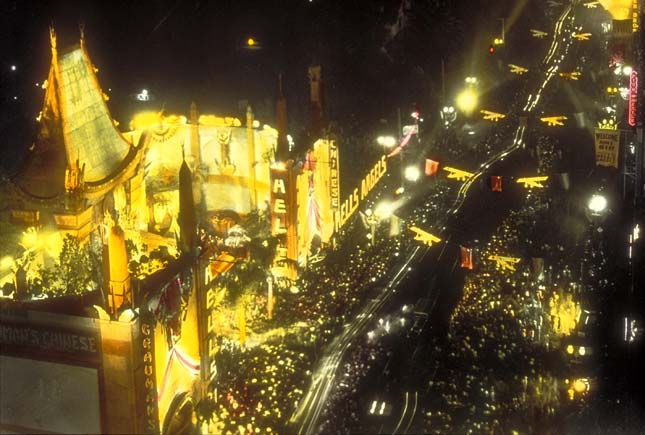 Now a days we are watching in home as my parents are not willing to come to theater one reason no entertaining movies now and another we can see relaxing in home and take care of other works nicely.

It depends. Big epic sci fi pic, or just want to get out of the house for a date night, we go to the movies. Especially this lux chain near us called Cineopolis. It costs about double, but you get a reclining leather burka lounger, you get to pick your exact seat online, and waiters come to your seat to get your popcorn order. Plus they have alcohol

. When we lived in SF there was a similar theater owned by Sundance in Japantown called the Kabuki Theater. These are complete movie experiences, not just a big screen and a dozen surround sound speakers. No sticky floors, no stale popcorn smell, and with the high price, not usually any kids. You should see if there is something similar in your area. Ironically, the first time I ever went to a theater like this was in Taiwan about 1o years ago. Seems to be catching on here now.

For home, typically we will watch a bunch of rom-coms, buddy movies, some less epic sci fi… Things were the big experience is less important and we might just want to curl up on the couch with a beverage, the fire going, and the dog.

Frequency wise we watch about 3 movies per week at home, mainly streaming through Netflix, crackle, or iTunes. We go to the movies about once a month maybe. Depending on what is out. Just saw Oblivion last weekend. Was worth it to see in the movies.

I’ve always enjoyed the familiarity of home and we’ve always had at least a decent TV to make it comfortable, but going TO the movies still has a lure - it’s special because you have to make the effort to decide to go, get ready to go, get there in time and then you always experience something new (whether seeing someone you know, holding hands with my wife, having one foot firmly stuck to a spilled drink, deciding whether to be responsible with that super kitkat wrapper, wondering just why THAT girl accepted a date with THAT guy or just watching the kids have a great time).

Last year though, in case it’s important to you research, I made an effort to minimize the theater-going by mounting a 65" 3D flat panel on a large wall in our great room and ran all the requisite surround sound controlled by some nice Yamaha equipment - it’s high enough to be a theater experience from that room and is a great experience from the two room spaces beyond it (for NFL parties or just the cooking channel!)…but the primary benefit is to save $600 per Ravens game and $60 per theater visit.

Who has time to go to the movie theater?

And for what? To see it 3 months before I can watch it at home? Whoopee.

You need ear plugs at the theater. I can adjust the volume on my TV.

I will say though going to a bad movie and having people yell at the screen is quite amusing. But that is more performance art than cinema.