Mason, nice sketch. I think the side wind is a little funny because your B-Pillar is slanting forward when it should be slanting back. The absolute right edge is also slanting in at the bottom. If you exaggerate it slightly the other way, it will make the sketch feel more stable and grounded.

On a higher level, I still wonder what makes this the NEXT srx? Right now it looks like a variation of the current design.

That’s exactly what’s wrong! I saw it when I was finished

Also, good point, I want to try to push it farther out there and make it something very different.

Great work Mason! I remember you from a couple years ago on IDsketching forum, nice improvement for sure! Amazing what a few years will do and how quickly that time has seemed to pass.

It would be interesting to see you try to translate some of your sketching into physical3D to get a better sense for that process and what details, gesture, etc do at different scales in the physical world.

As far as making some things in physical 3D, I just am not very experienced yet in that field and I know it would be good to start on it. I have a product I’ve been developing and I want to make a prototype. I just don’t have many resources to carry out with it.

Time to get a block of balsa wood!

Seriously, when I started getting better at making models, my sketching drastically improved. It is like some kind of connection happened in my brain and I understood what the lines meant on a deeper level.

Get some foamcore and do some sections.
Go to lowes and get some pink or blue insulations foam, some adhesive, a sure form, files and sandpaper.
Clay, castilene, plasticene, etc.

I don’t know if there are any new/better books, but there was a Shimizu book that had a few different techniques back in the day:
http://www.amazon.com/Models-Prototypes-Yoshiharu-Shimizu/dp/4766106172/ref=sr_1_1?s=books&ie=UTF8&qid=1340847419&sr=1-1&keywords=yoshiharu+shimizu

Since your sketches are usually supposed to represent something that will one day exist in the physical world it only makes sense to gain some experience going back and forth between object and sketch to deepen your understanding of the relationships between the two.

Haha, thanks! I actually made a small model out of balsa wood not too long ago. I didn’t really like that material. I’ll try to do something else.

Hey Michael, what do you think about this? Love to get feedback as this is where I’m trying to start. 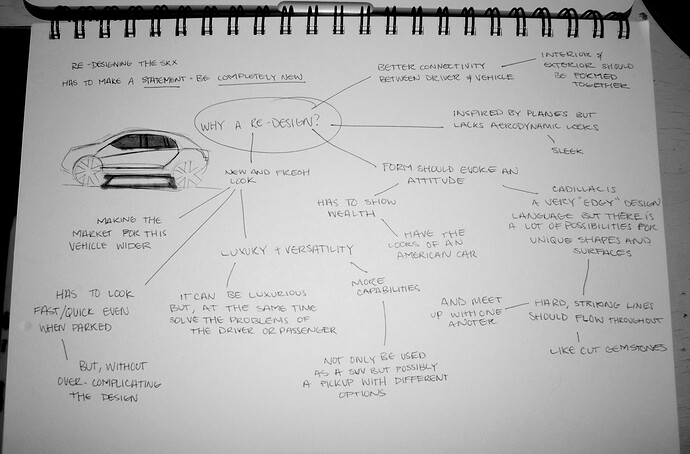 That is a good exercise. Now try breaking down each f those clusters into descriptive words (you have started already, luxury, versatility, wealth, american, fast) and try to find a series of pictures that evokes the meaning of that word to you. By doing this you will start to build a palette of forms, colors and textures to inspire your theme. You can use that to break away from the current vehicle more easily.

Another way to do that is to start thinking about the packaging of the vehicle’s mechanicals. Is this a traditional combustion engine with an engine in the front? What would happen if the engine went under the front seats like the original Toyota Previa? What would happen if there were four small motors, one at each wheel? These questions might sound silly, but they may get you somewhere new.

Awesome, that will be very helpful I think. I always lack the inspirational aspect in the research phase and that is a good solution! Thanks for sharing! 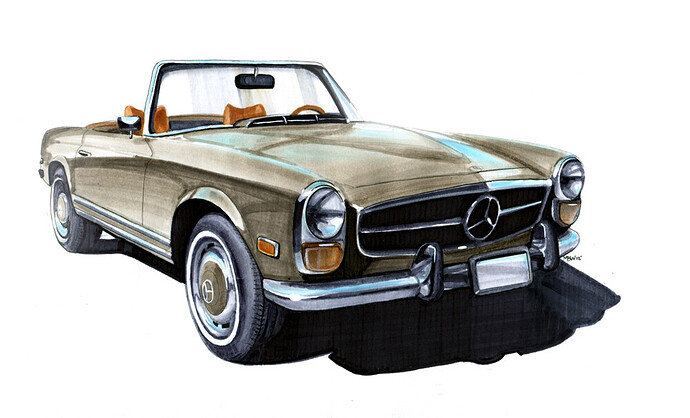 Hot. I’d like to see a step by step progression of that…

Hot. I’d like to see a step by step progression of that…

I would, it’s just so time consuming and it is annoying to stop, scan…sketch, scan…etc. haha.

this is great work for someone your age… i would remove the two drawings of the forest (below the Google and sea turtle) http://cargocollective.com/mbw/Other-Artwork

they detract from your otherwise superb portfolio

Thank you for the feedback and I’ll do that!

First real attempt on interiors. This being a bit on the futuristic side, wanted to try some new forms. Comments would be appreciated! Going to California soon so won’t be posting for the next week! 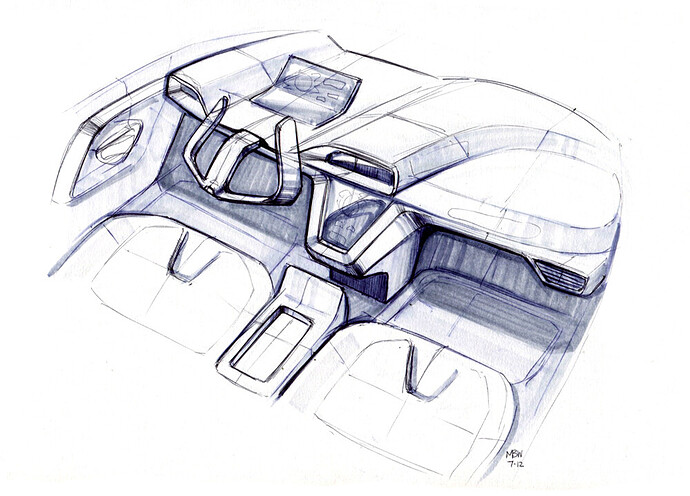 Fun sketch. On thing that stick out to me is that there is only one HVAC vent, and it looks very traditional, while everything else is not. It might be interesting to do a few studies of just the steering “wheel”… right now it looks like a flat bent piece of metal, it doesn’t look comfortable. It is also the only thin whisky element in the composition. The instrument panel right now looks a bit like an open laptop, is there a way to to visually connect this element with the steering wheel more?

Hey yo, yes I totally agree, thanks for pointing out

If anyone wanted to help me out, there’s a contest on I Draw Cars facebook page, go in the summer sketch album and it would be great if you could ‘like’ my Camaro rendering!

Hey everyone. I am starting a new project, and I have just finished up the theme boards and I just wanted to get feedback on them and get any tips if they need to be changed or what not. Coming up next will be three separate ideation boards from each inspirational motif. 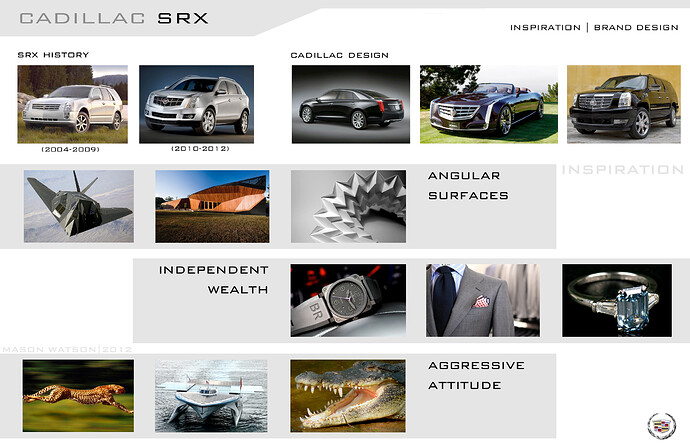 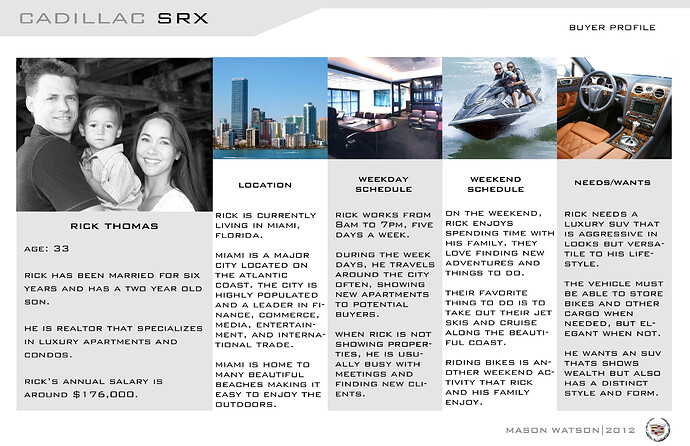 Good stuff. It is interesting to see you populate a larger world for this design.

I’d move away from the “standard” inspiration images of a stealth fighter.

I also don’t think the crocodile, and cheetah get you anywhere new.

It might be useful to think about what other brands and objects make a personal connection with this persona. Does he really wear a Bell & Ross, or is that design inspiration? What sunglasses does he wear? What phone does he use? What clothing brands does he gravitate to? How does this effect form language, color pallets, interior trim materials, finishes? Does he have a different side of his persona at work, with his family, and our with friends? Explore that a bit. What are the competitive vehicles?

Thanks for the info yo, will defiantly work on that! Anyway heres some free time sketches with some copics