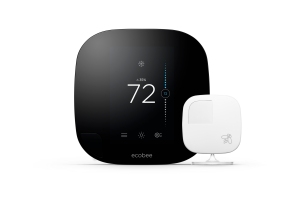 Sounds like a cool product. The additional sensor pack is a great idea. It addresses a common complaint with thermostats only understanding the temperature in a desecrate location vs the average temperature in a residence.

No, but it looks cool. I played with earlier EcoBees, and that article is right on the money. They used to beat you over the head with data. Also, while the design looks OK in photos, it felt super cheap in person. Horrible part lines and the enclosure wasn’t very securely locked together. This new one looks a lot better on both fronts.

The UI does look eerily like one that I have worked on though. I was big into little dots leading to a number for a while. Undoubtedly a coincidence though.

Just looked at this again. I like the humidity sensor. Probably overkill for mass market though. I prefer the Nest, which has a humidity sensor and uses the data to adjust the temp. A comfortable temperature is dependent on both air temp. and humidity. I studied some of this stuff and I honestly have no idea how I should adjust my temp. to compensate for humidity.

I really like the idea behind a remote sensor.
I would love to put the thermostat in my furnace room as opposed to being mounted conspicuously in my living room or hallway. With a remote sensor there isn’t any reason why the main terminal couldn’t be next to the furnace, the sensors placed wherever you need them, and day to day control operated via smartphone.

van ID: Can you post a picture of the thermostat you have on the baseboard? Maybe I can suggest something better.

The current Aube/Honeywell and Stelpro baseboard thermostats are thoroughly tested to maintain a temperature within +/- .2 C of the setpoint. You can get them as cheap as $20, depending on the wattage and if you want programmable.

This is the one I currently have. Just a basic model from HomeDepot.

I think I’ll upgrade to Aube/Honeywell as the temperature swing we get in what is probably a 8’ by 10’ room is crazy.
Our baby monitor also has a thermometer on it - so tonight I’ll try and check the range out of curiosity.