A heel-less shoe? By Antonio Berardi

Am I missing something here, aside from the heel? I can’t imagine how anyone could walk on these for more than, maybe, five minutes.

Are you finding them comfortable Lew

I’ve thought of something similar. I think you’d just get tired when first starting if your calves aren’t accustomed to it. When I walk barefoot I only walk on my toes like that, much less stressful on your joints to “cat walk” and have your muscles provide the cushion when barefoot. Ladies that wear these will have some lovely calves though

Are you finding them comfortable Lew >

Ya know yo, I’ve just never felt comfortable in open toes . … . unless I’ve got on my Wigwams.

Ladies that wear these will have some lovely calves though >

Well yeah! Sadly, they won’t do much for skinny legs. 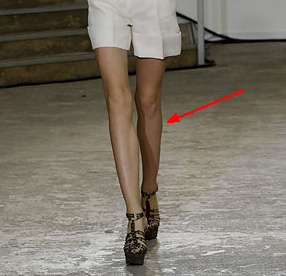 Yuck! That’s what I mean, maybe after a few years of wearing these it’ll put some muscle on those toothpick calves. Then they won’t wobble around trying to walk in high heels with weak ankles. 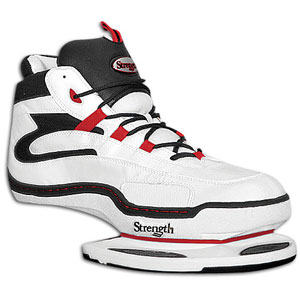 That was the first thing that came to my mind. I was tempted to get those back in my track days but already had insane ups. I knew a guy that used them but never heard if they really worked.

I actually bought a pair, a lot of our athletes train in them. Roy Jones used to go for long runs in them, so I wanted to try them out. Casually walking for 30 minutes I though my legs were going to fall off. They definitely build different muscles.

Not a new idea though - Ferragamo did 'em first, decades ago, maybe in the forties or fifties? (looking for photos)

Shoenista’s right. Been around for quite a while now however, they’re big for the next coming up seasons. I think out of everyone who’s done it; Moschino has done it right 2009/10 with a sleek wedge, an oversized insole overlapping the platform and peep toe. The orange one is just adorable. see pic. 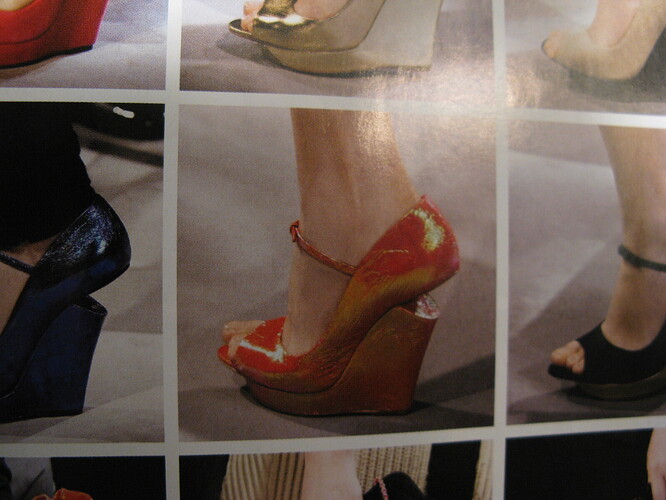