I have also tried these Sony’s…they sucked too:

funny! I bought the same sonys to augment my crap iPod ones,and also found they sucked. They don’ stay in!

I’ve reverted back to using a pair of old sonys I’ve had for about 4 years that rock… sure they have a black cord and are dated looking, but they stay in on a long run, are cheap and sound better…

I’m sure there are much better ones out there that someone will post.

I have those in blue and another pair in black and have found them best for running as well. Easily the best $10 earphones I’ve ever bought. Something tells me this a problem that needs addressing…

Try the apple in-ear earphone they sell seperately (about $40).

Good sound quality too. Lots better bass and it blocks outside noise almost 100% (I always get people shouting at me to get my attention when I wear them since i cant hear anything but my tunes).

I dont like ones like those Sony you mention that go over the ear, because I find it uncomfortable if you are also wearing sunglasses.

What about safety? Can you hear traffic, bikes, etc. with the in ear ones?

The Shure in-ear phones sound great and they stay in place for me. However, they seal really well, so you could be hit by a bus and not hear anything.

I’m currently making due with the earbuds, but it seems like a pair of old school, “over the top” headphones makes good sense for running. You’re bouncing up and down a lot, and something on your head should keep everything in place.

I’d prefer something cheap, since I’m not about to take good care of them. In this situation, I think they make sense from a safety standpoint as well. They’re not stylish, but maybe something like this?

What about safety? Can you hear traffic, bikes, etc. with the in ear ones?

I guess that could be an issue. It depends of course how loud your music is. If safety is concern (like running/biking on the street), you’d likely be OK if you didnt crank your tunes. On a bus/plane or biking in the forest, not so much of an issue… 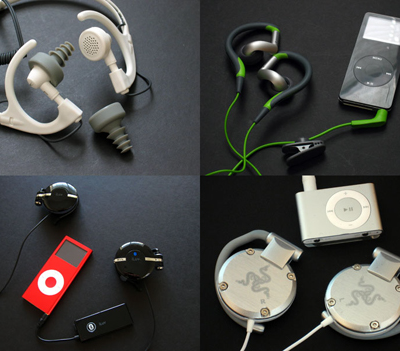 For those of you designing personal electronics, iLounge has a fantastic roundup of a variety of different headphone styles, with tons of pictures. A must-see if doing headphone research.

I’ve owned a pair of the Bang & Olufsen A8 earphones for 6 years now. Still the best headphones for running.

I was travelling back to Denmark a week ago and my handy Apple in-ear headphones broke (the wire at the jack severed).

I looked everywhere to replace them, but apparently they have been discontinued in europe (or so I was told).

I checked out several alternatives (including some of the ones mentioned here) but really had my heart set on the apple 'phones, and was pretty sure I could get them on return to Canada. I wanted the in-ear type, and there are surprisingly few on the market that dont either look like space junk, or even try to present a level of acceptable audio quality. Sorry, but Im just a little dubious of SoundMAXXXX brand earphones, call me crazy…).

Rather than buying a set for $20 that I knew I would never use (since I would buy the apple ones when I got back), I was actually considering either getting nothing (no music on the 8 hour flight home- arghh) or going all the way for the $200 SHURE ones I previously mentioned. Anything else seemed a waste. I stood and starred at the racks of $20 mediocre headphones for honestly more than 1 hour… I just couldnt bring myself to buy something i didnt really like. It wasnt the money so much but the feeling of being lack of control, perhaps…

…In the end, I couldnt really justify the $200 Shure vs. the $40 Apple. I didnt want to waste $20, so got a piece of junk at a dollar store for $5. It was honestly the most difficult $5 I ever spent! I had more stress and internal discomfort knowing I was wasting $5 of crap than if i would have spent the $200 for a good purchase…

Just thought I’d share as it was on topic to this discussion (and also perhaps the previous thread of “What would you spend money on”).

PS. I was upgraded to Business class so didnt need to use the junk earphones. On my way back home from the airport I stopped at an Apple shop and got my beloved in-ear 'phones.

All is right in the world again.

Bought 'em. Love 'em. No more duct tape over the ears to keep the ear buds in.

I was so disappointed with the new white Sony’s we both had… how could they go backwards in terms of fit… I still use my apple ear buds for the train and for just walking around, but these just are better for performance uses.

I know…I was so looking forward to using them when I first got them. They were even white, so they didn’t look like I was plugging in a non apple set of plugs. 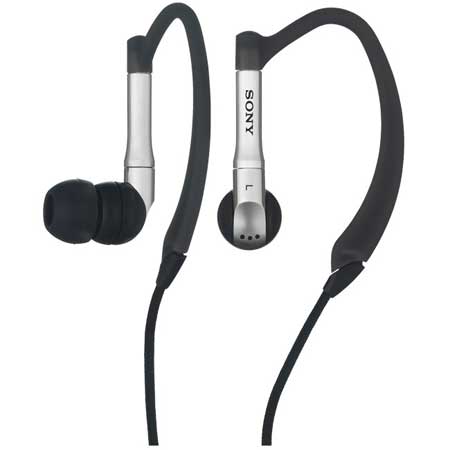 I like the deep in-ear feel. Been meaning to grab some of these to try out. In-ear + ear hook.

i just got these sennheiser buds… small form factor and very good sound. and i’ve been running with them and very happy with how they stay in place. mine are all white though

brett i have the ear phones you are talking about and they are horrible for running. the left ear piece (the one that takes the weight of the cord) will not stay in especially on longer runs. plus side i spend so much time putting them back in that i forget how far i ran in the process.

I did these, long ago, fm stereo and wireless to your walkman/diskman/mp3 or ipod