Hasbro owns the Transformers and was obviously working close with the movie and character designers. the toys are not as bad ass from casual looking online as I would expect from watching the movie.

http://www.hasbro.com/transformers/ < are these old toys from 20 years ago or do they look re-tooled?

Maybe i am missing something here but if there is so much money to be made 1. where are the toys and 2. I wonder how much can be made off licensing toys vs movie proceeds.

I just want a Camero that turns into a protective robot. Hell from watching the move I think now I want a Camero.

Yeh the same thing happened to me.

The movie was coming out so I wanted to buy a cool transformer toy just like we had in “the good old diecast days” Went and had a look at them and they were all pieces of crap that wont last 3 transformations or a fall from 3 feet.

After I saw the movie I went and had a look again and the only good looking ones were the static models that dont even change and the posters.

The new toys (and the new transformers for that matter) are nothing like their original toy/TV counterparts.

I don’t care so much anymore since the toys I had when I was a kid (and still have my original Devestator and Optimus Prime above my PC) were far better than any of the new versions that have come out in the past decade.

Besides, Bumblebee is a Volkwagen Beetle. I’d feel dirty for owning a Camaro toy.

Truthfully I wonder if the toys are even that profitable anymore. With kids now I wouldn’t be surprised if they make far more profit on video game and movie ticket sales over the profit from a plastic figurine. In 1984 that wasn’t really an issue, you didn’t have to worry about video games so toys were THE thing to play with. Especially when you had nearly a hundred characters that could be made into toys…there were only a dozen robots in the movie, which only leaves a small amount of toys to be produced.

All the transformer information you will ever need. 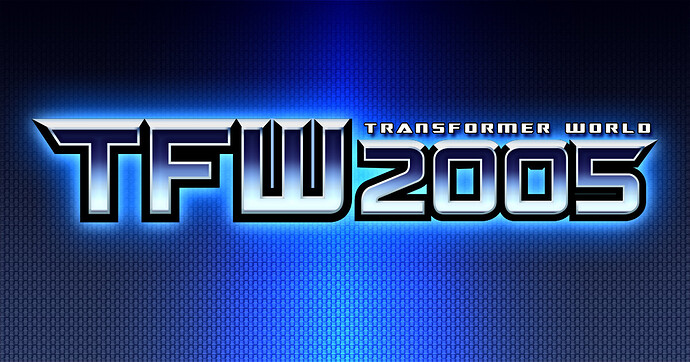 I had the original Megatron when I was a kid. If I would have kept it in the box, they go for around $1000.00 depending on condition.

I wanted it so bad, there was no way it was staying in the box.

I got these for my son the other day. They take up too much room though.

This is the pre-order from Walmart:

I’ve seen that Takara Optimus Prime in person… it is SWEET. Nice and heavy with metal parts. And it’s huge.

That new Bumblebee figure looks sick. Is that a Wal-Mart exclusive, or are they selling that anywhere?

Any thoughts on the movie? I was kind of let down a bit… no song, but I’m looking forward to checking out the toys… it boggle my mind how all of that crazy mech language is going to boil down into a Camaro… he looks a lot different from the movie shot above though, check out the torso.

This is all I know on the Wal-Mart toy. 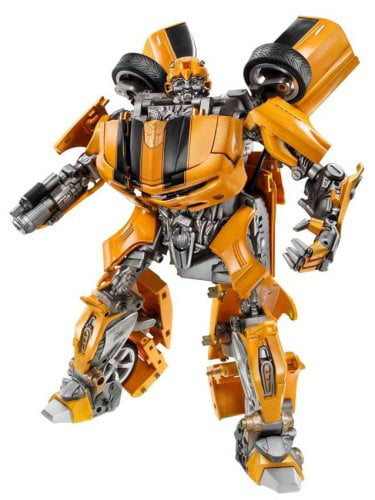 As far as the Movie goes, I thought it was awesome! Great action, some funny jokes, cool cars and a simple story.

I think that’s the consensus from all the reviews and posts. Some people have complained because they hate Michael Bay, but I think he did a great job.

The robot design is awesome and the animation is perfect. It blows away the cheesy original designs. The details are amazing. Here’s a close up of Bumblebee:

Here’s a helmet they are offering at Target. It’s supposed to be a kids light. I got one and will repaint it to make it look more realistic:

I thought the movie was amazing, funny, lots of action, a little bit of heart, and tons of stuff getting destroyed.

The CGI is truly incredible, I can’t even begin to comprehend the complexities of the animation systems. They had an article on it in Pop Science (google it for the link) and each robot was made up of over 10,000 unique and animated pieces.

Can you post the direct link? I can’t find it.

Ah, It was popular mechanics rather…

I just saw this on Gizmodo - a Soundwave MP3 player. Too cool. The downside is you don’t have those transforming micro cassettes, which were one of my favorite features of that toy…

Soundwave Transformed into MP3 Player - Just Like We Predicted

This is an MP3 player in the shape of boogaloo-lovin' Decepticon Soundwave from Takara Tomy. At a cost of $105, it rang some rather familiar bells with us...

You can buy a full size transformer online!!

The transforming cassettes where the whole thing, Rampage.

In appreciation of Soundwave: 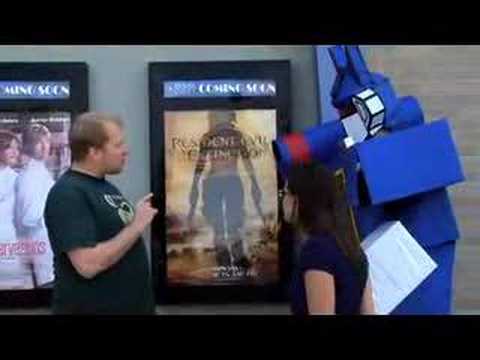 Ahahaha. “Get off the couch ravage”

I’ve gotta go, that’s Megatron on the other line.

I just went to TRU yesterday and saw the new Transformers line. As previously stated on this thread, it was a HUGE disappointment. What really struck me was that half of the product line was non-transforming Transformers toys. There are all kinds of statuette type things - looks like Hasbro just went a little too SKU crazy. There were actually disclaimers on several of the packages that had to state “non-converting toy” or something. Just to state the obvious, that goes against the whole point of Transformers!

BTW, thanks for the YouTube link, Yo. That seriously made my week.

This site is running slow for me but this guy (Ben Procter) worked on the movie and has awesome hi-res images and animated renders etc.

There are 99 image pages and 15 main pages. Awesome concept sketches and stuff.