Some of car designer Harry Bradley’s work is on display in the lobby of Boston’s Children’s Hospital. To learn why - and much more about the guy who influenced what was “cool” in car styling for four decades, please look at my car design blog for photos, links and more info.

Awesome, and timely with the “Sick Ass Car Rendering” 1HDC competition going on!

Thanks for posting this!

Nice Thanks for the link

Has this Truck solution inspired Colani?

My first critique at Art Center was from him. It went something like this:

"Wow this is beautiful. The expression of the line and hand work is just,…expressive and emotive. Its fantastic for an illustrator really is.

But for a designer its an abject failure… A real piece of sh*t. I mean is that cube breathing? or is it supposed to be a sphere? Is it confused? I’m confused at what it is, it looks like a rotten egg. Your technique is vague and uneven. If this took you more than five minutes, well you are wasting your money here with this pile and more importantly you are really wasting my time."

He enjoyed doing that.

He was a fantastic teacher and had the innate able to pull the best out of you wether you liked it or not.

Although his choice of painting his Infinity Q something metallic gold with purple and red highlights and grafting a 3 foot fin on the trunk (er sorry its not a trunk– its a rear deck of a coupÃ©) with matched paint was suspect, his “advice” was always well taken.

Nice Thanks for the link

Has this Truck solution inspired Colani?

HA! Supernaut, I remember the central tailfin and fake side exhaust pipes on his purple and gold infiniti. When he would criticize my design choices, it softened the sting of his criticism to think of that car.

mbd: This is the guy with the Infiniti! I remember seeing that car in a magazine. God that thing was hideous.

I want to see a pic of the infinity.

Now that I think about it, I think it was an Infiniti J30. Someone from Art Center must have photos of it. 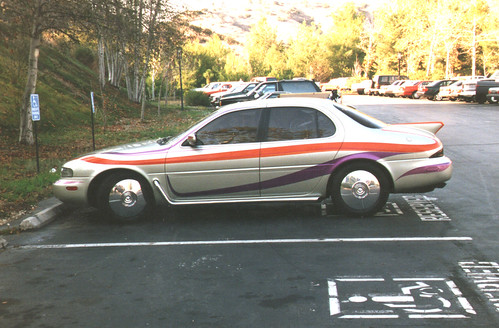