Got my first taste of the Blackberry Playbook this weekend. I only played with it for 2 minutes, but here is what happened:

I wasn’t sure if it was a dummy or functional. I swiped my finger on it until it came to life. First screen I get, “Can not connect to network”. OK. I’m in a store, I don’t know any wi-fi passwords, so it’s a paper weight? After a few seconds I noticed the “swipe here” on the bottom of the screen. I do that and it takes me to an iPad like program menu.

A horrible list of programs is there: a browser, calculator and 3-4 other things that would require network access. I hit calculator. The program opens up with only 6 buttons visible seemingly to be cut-off the screen on the right. Also, it is mal-proportioned and pixelated. I basically bricked it by opening the calculator.

Needless to say, I’m talking to my stock broker to get in on this action. Well done BB (irony here). 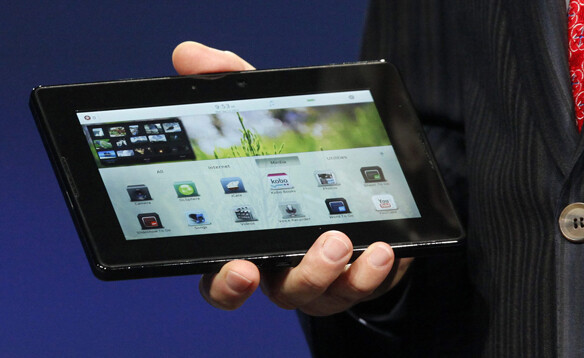 I played with one recently as well at a Best Buy or Staples store.

Look and feel was decent, and to be honest better than I expected. Pretty tight finishes.

I also couldn’t figure out the UI. I got into some app, then couldn’t figure how to get out. I was swiping all over the place and looking for buttons to click. Finally figured out that the bezel itself is a UI control and that there are some secret controls to get back, and across running apps. Something like swiping up on the bottom bezel brings you home, swiping down on the top bezel brings up in apps menus, swiping across the bottom does something else. I couldn’t for the life of me really figure it all out so gave up. It’s certainly less than obvious and while I’m sure you’d get used to it after owning it for a while, it’s pretty baffling with little instructions. The complete opposite of the iPad where there is one button and it does what you’d think it does.

I think I also crashed it somehow opening some app. It was some game that took forever to load and maybe was one of those android apps that runs in a shell. Dunno.

I played with one yesterday at Best Buy. Pretty boring design, even for a tablet.

I got lost in the photo viewer and couldn’t get back to the home screen. I tried every manner of swipe, pinch, two finger swipe, etc on the screen and bezel but nothing. There’s no home button, so at that point I put it down and went try out the HTC Flyer and Motorola XOOM. It was like the old Street Fighter II arcade game days of trying to figure out the hidden moves.

The Flyer is a nice piece of hardware and the UI is attractive but it runs so slow and sluggish. The XOOM is a great alternative to the 1st gen iPad. It’s probably the fastest android tablet I’ve used. No lag or stutter.

After using these, I’m glad I went with the iPad 2 .

Richard: re the Playbook, it was solid. Felt like I could use it as a pry bar.

With all these tablets, why are cel makers building these things? Moreover, why didn’t someone try to team up and build an iPad buster. It seems like you really need the hardward & software ability of Apple to do this right. The rest is always going to be behind.

Last note…last night I’m watching the Lightning-Bruins game. They kept having a commercial for a HTC called the “Incredible S”. I kept getting startled because I kept hearing “Incredible @$$” I kinda liked HTC hardware, but I hate this kind of attempted stealth marketing message. Ugh.

Everyone is trying to build an iPad buster. There are floors and floors people in office buildings dedicated to these tasks. The challenge is that it’s an astonishing piece of hardware-engineering-design with a great interface. The “team up” is happening now. It’s Google Android + XYZ hardware manufacturer. Without Android, all the OEMs would be scrambling to create iOS beating interfaces on their own. Even with the vastly different skins that OEMs are putting stock Android, there’s still some semblance of consistency.

I had a chance to try the Playbook the other day while waiting for a delayed flight in Atlanta. My first impression was that it was well built and it felt ok in the hand, but the design was pretty forgettable. The UI though is its downfall, it was really bad. Everything has to be done with odd finger swipes that don’t make much sense. You have to figure out where to start and what gesture to make, and if you get it wrong things happen that you did not want or expect. I also found the different levels of home screens kind of annoying, why do you need 2+ levels of home screens with 1 for App icons and 1 for small expanded app windows?

With all of the existing hardware/UI on the market why did they have to go in such an odd unintuitive direction? Maybe they thought, hey if it doesn’t work well maybe Apple won’t want to sue us.

RIM goofed. There was a huge potential for them to really tap the business market, but they lacked even the most basic features like native email and calendar that are ESSENTIAL to any businessperson.

It’s very curious why all tablets are being designed for horizontal use. I (and a lot of other people I know) use our iPads in portrait mode for most things except video or games or photos, since it’s more comfortable to read/view/hold. Think about it: holding it vertically is a lot less stress on your holding hand than holding it horizontally, where there is more torque since the device extends further. All of these new tablets are coming in awkwardly long shapes that look alright in horizontal view, but are unusable in vertical mode.

RIM bought an extraordinarily talented group by the name of TAT (the astonishing tribe), but probably wrecked all their designs with corporate bullcrap (don’t quote me, this is just my guess)… how disappointing.

I agree that RIM failed on many fronts: native e-mail, no word, excel, and powerpoint. Every business person uses these apps. Plus, the biggest failure is the non-intuitve user interface. You have to swipe from the bezel to change apps. Apple clearly has everyone beat in this department. Apparently, HP is working on a new tablet in an attempt to dethrone the current leader, iPad 2. We’ll have to wait and see if it can achieve that or if that is merely just a bunch of marketing hype!

Nothing like being pregnant with the Zhu Zhu Babies. Cool toys.

Kate et all: The non-intuitive interface seems like such a stupid game plan. Anyone that compares the two will buy an iPad. Why would you trust that, someday, you will be able to use your new Playbook, when you can use the iPad right now?

Just saw the Playbook on sale for half price at Radio Shack. I think we can officially call it a complete and utter failure.

What all these companies don’t [seem to] get is that Apple began work on iPad even before iPhone. Nearly a decade now. I guess they have to crank something out, but they just wind up looking completely incompetent. Great products take time, and dedication to design inside and out.