to be honest, i’m a little bit ashamed that i was unable to complete my work for a bicycle design competition. i was severely plagued by a case of Hick’s Law; the more i sketched, the more difficult it became to settle on a single design. as a result the deadline for entry passed but i continued to sketch.

my goal is to design a unicycle that can also double as a bicycle. in addition, it would be capable of autonomous function (i.e. it could take you to work and take someone else to a different location then come back for you). energy would come from a variety of sources, although renewable energy would be ideal.

i call it the Human-Electric Revision Zero as the following sketches are the initial stages of product development:

please feel free to comment here or on the guestbook. i will be adding more sketches as time progresses.

i do not quite understand what you have going on there, how would someone ride this? it looks like it might be pretty akward, is the one of the wheels weighted? on bikes you turn by a combination of leaning and using the wheel to balance back up, how would this bike turn? maybe you need to throw a human scaled person as an underlay to get the proportions and position of key compenents.

here’s a link to what started everything:

and on that link are some internet references i used as my initial design research.

i am really curious about how it would ride as well. that’s why i wanted to share it with everyone here hoping to give it a greater chance of becoming a reality.

the H.E.r0 concept is essentially a unicycle with training wheels. the rider position would be atypical of a normal unicycle though. the extra wheels can also be used as gyroscopes when raised off the ground. now, i only have a basic understanding of gyroscopes but from what i do know is that it is the precession of the gyroscope which helps a bicyclist to maintain balance: 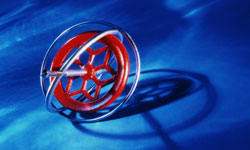 Did you know that airplanes and space shuttles use the utterly low-tech gyroscope for navigation? Discover the secret behind gyroscopic motion!

so, these wheels can be manipulated “somehow” to aid the user in turning and leaning. at least on paper.

during braking, the H.E.r0 concept would be able to rapidly store that energy with the extra wheels. that energy would be sent to the extra wheels when lifted off of the ground causing them to spin faster. theoretically, this would help to maintain balance. conversely, the free spinning wheels could then be used for accleration when lowered back to the ground.

also, i don’t really put people in my sketches till i’m ready for them. but i’m confident that the proportions are accurate enough for now. this concept is really more a robot than bicycle. it is human-friendly so i will eventually have to be more discerning about the ergonomic issues as we get down the road… to el segundo.