Is it possible to produce Gum rubber in other colors besides its original shade? I’d appreciate it if anyone could shed some information about this, thanks!

yes, but then it is just called translucent rubber. You have to specify the pantone and the percentage of transparency, but you will have to see it in prototype samples because the translucency will vary based on wall thickness and variation. I usually ask to see 3 or 4 levels of translucency.

Will that decrease/ increase the durability of the outsole or is that negligible?

With the factories we deal with we have a swatch book of different gum colours, these just have number references for the factory rather than pantone numbers so I guess they are variations that we had developed with the factory

Will that decrease/ increase the durability of the outsole or is that negligible?

It is negligible, but there are a few things to keep in mind. there are two process for getting clear rubber (it has to be clear so they can mix a colored tint, this is a bit different than gum rubber). Both processes cost more than regular rubber of course, but the more expensive of the two (Peroxide cured I believe) does not yellow and bonds better. Clear rubber is also bit stickier, which sounds good for traction, but what actually happens is that dust sticks to it, making it slippery. The Jordan V was one of the first high end basketball shoes to have clear rubber, which made sense for MJ because he wore a new pair in every game on totally clean courts!

If you want natural gum its called ‘Crepe Rubber’. It usually comes in three colors: light yellow, natural and nicotine (smoky brown). It can also be dyed with a black ink.

‘Gum Rubber’ for the application in skate, basketball and boat shoes is made with a combination of natural and synthetic rubber. You can get a wide range of gum coors in the brown/orange spectrum. ‘Gum Rubber’ is also less expensive as ‘Crepe Rubber’ because of the lack of natural rubber.

Below is a picture of a ‘Crepe Rubber’ block::: 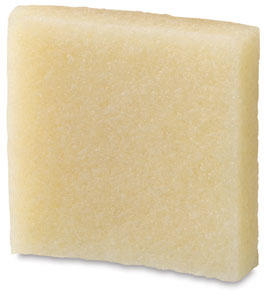 and crepe rubber is the absolute best thing in the world for cleaning /removing marks from suede or nubuck, so if you are ever in a factory which has this stuff, make sure you get a bit to take home!

ha, I never knew that!