By now you’ve all probably heard about the miners being rescued in Chile, that is unless you’ve been in a cave for the past two months. Anyway, Oakley and particularly its Radar goggles have received plenty of free publicity during the rescue. Oakley donated 35 pairs of them for the operation.

You can’t buy this type of publicity, one estimate places the exposure at $41 million in equivalent advertising time. 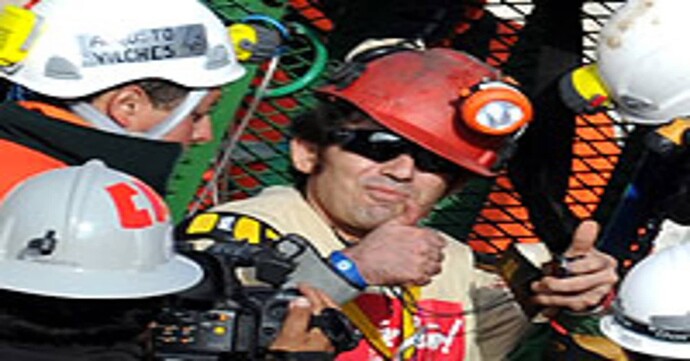 Oakley Gets Projected $41 Million In Exposure From Chilean Miners

Untold millions of viewers worldwide have watched the Chilean miners, after 69 days, being pulled up from deep beneath the earth. When they come out, they are not surprisingly “brandless,” save for the Oakley sunglasses that each miner has worn.

I was thinking about bringing it up too. Absolutely genius from Oakleys part!

Here’s the press release from Oakley;

Too bad the glasses look like they are 10 years old! But yes, excellent PR work. Someone really did their job well in Oakley brand management.

The end effect is looking like the retro 1990’s glasses have been sitting on a store shelf in far away Chile out of the modern mainstream of style and evolution.

The photo looks ridiculous because of the glasses. Seems crass. I am even more less likely to buy now.

Too bad Ray Ban didn’t send down some Wayfarer’s

from the press release:

Based on their requirements and full product specifications, Oakley donated 35 pairs of Oakley Radar® with Black Iridium® lenses in Path™ and Range® lens shapes for the miners who will need the protection of Oakley sunglasses as their eyes return to normal. Minister of Mining Laurence Golborne (who is leading the rescue) has asked to wear one of the extra pairs to show solidarity.

STFU®. Donate and don’t make a big deal about it, but telling the world in a press release and sticking your registered trademarks all over it is tacky™ . Donate 16 million pairs to Chile® for everyone in the country to show “solidarity®” and keep quiet about it and Oakley can win me over.

I heard a rumor from my old Alias rep that Jim Jannard, the Oakley founder, had his own copy of Design Studio at his home in the San Juan Islands in Washington state.