A small project for my ergonomics class. We had to design a pedestrian GPS, mainly for geocaching or traveling. This concept is 2.25" Wide by 3.25" high and is designed to be easy to use by both right handed and left handed people.

Many ergonomic values were studied and a user friendly interface was designed to complete the set.

I will probably make a model of this but for now I just have a few renderings and a video to display the interface (made with slides and links between each other) I have other sketches that I may attach later even though the information written is in french.

I’m really proud of myself on this one even though its just a small second year project, I would love to read your positive or negative remarks.

—1 little thing: To zoom you have to hold down the analog and slide up or down to zoom in/out (explained in the sketches)


Enough. Here’s the work (final rendering is attached to the post): 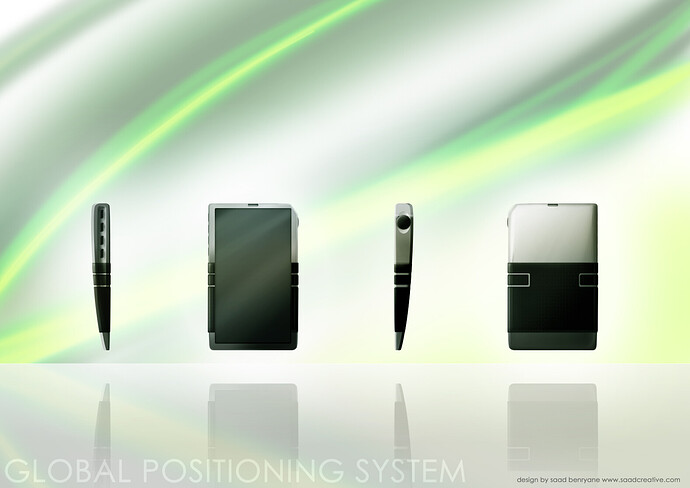 looks like lloottss of time went into those photoshop renderings! I like the sped up youtube movies, was fun to watch your process. Only comment rendering wise would be to crisp up some edges as they seem a little soft making it hard to discern some form.

looks good!
I have no knowledge of PS renderings - i can draw using markers and paper, and I can model & render in Solidworks/Photoworks - thats it for me. So congrats on making some nice renders!

A few tips -
Perhaps a 3 quarter view? It would convey a much better feel for the product, as well as giving it a wow factor. The rendered profile views don’t really do it for me.

What is hte relationship between the glowy green/yellow background & the product? I liked it better when it had the 3d sketch underlay.

It also looks to me as if you have really only done two drawings, then mirrored them and altered them slightly. The profile views are really best for tech drawings, or if your product has a wicked profile (like a car - veyron, anyone?

I know you said it is hand held, pedestrian use etc, but maybe show a hand gripping it? just so we know how it works. Does it fit in the pocket like an extra phone, or is A4 size? I can’t tell…

I really don’t mean to tear you a new one, and nor am I trying to start a flame war, it’s just my thoughts. If you have addressed these things and I haven’t realised, then feel free to chastise me.

Well thanks allot for the comments I really appreciate it!

CADBOX - Yes it’s true that it looks a little soft I also realized that after a day without looking at it (I recommend it to people it’s a technique I use to see your result with a “new eye”) Although for the photoshop rendering it must have took me no more than an hour and a half which I consider is a moderate time for a rendering.

EPIC - I have fun with hand rendering and with photoworks too and i try to keep everything balanced in terms of competence but my strength is still tablet rendering and sketches (from my judgment).

Due to the amount of time that was allowed for this project I couldn’t do a 3/4 view rendering but as you can see at the verry beginning of the rendering video, in my underlay there’s a 3/4 view. I will post it as soon as I get it back from the teacher. There is another hand drawn page wich displays the proportion of the device and the different experimental ways of holding it with some notes on the good and the bad about certain buttons layout and some other data collected.

For the green glowing background it’s to give that natural and technological feeling. It’s also to discern this GPS from other similar products on a perceptual level (Magellan, Iphone etc.) and with the organic curves send an indirect message that it has something to do with nature and being outside. I don’t have a PHD in psychology but I do have some notions that I learned with time and research (I would love to learn about how people percieve shapes and colors on a complex way, I’ll probably do a masters in that after transport. design).

Once again, thank you!

you take criticism well! must be an ID student…

Funny remark! And yes I am a 2nd year ID student. It’s true that you learn to accept criticism as time goes but I must say being an ID student and knowing how to take someone’s opinion don’t necessarily go together (personal everyday experience). For me (and I’m not putting on a crown) it’s mostly my background in graphic design comunities and being used to get feedback from different people with different backgrounds, cultures and philosophy. I’m glad that I had to experience this in my arrogant early ages.