What are your thoughts on this? I think they’ve missed an opportunity to be truly innovative. I see just a normal ugly car without steering wheel when they could have gone for something totally different, not just going from point A to B, but use the time in between to connect with other people who is traveling with you, work or just use this commuting time usually you waste when driving. The technique behind it is amazing, but in my opinion they should have gone a step further and create a totally new concept. It could be they just wanna show the technology and nothing more than that. 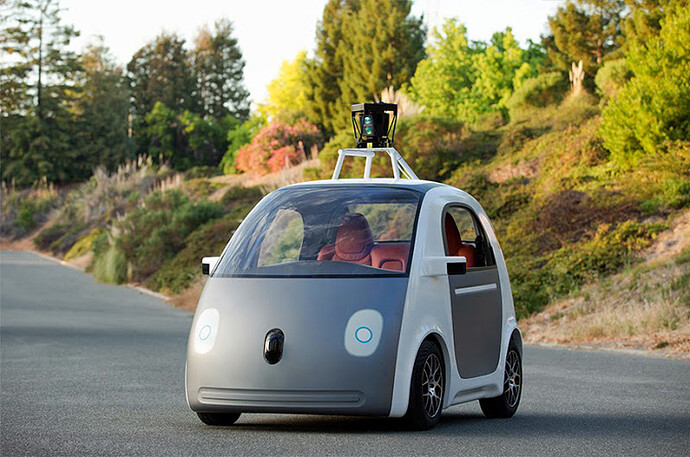 I think they’ve missed an opportunity to be truly innovative./

Sure, you can do those things, but they would likely be dismissed as gimmicky.

I would like the seats to recline enough to nap, other than that, there easily could be a tray (like a plane) for my computer/book/food/whatever or a head-up display. But showing a tray is not something I would call innovative, neither would be a head-up display.

Love the pursuit of technology, as long as it doesn’t become compulsory or get NSA OnStar tech. =)

More so with Google than anyone else, the need for the kindergarten cutesie look is needed to offset reservations about the downsides.

This is an exposure exercise not a product launch, the removal of the steering wheel is a big enough of a change to freak most people out.

Simple muted design to make you talk about the tech, not its looks.
Limited speed of 25mph
Picking older generation participants to test and review it

Its a stepping stone to a big change. People will be talking about it and considering how it would change their lives.

Didn’t they hire Mike and Maaike already a few years ago, the people behind the ‘rolling room’ concept?
http://www.mikeandmaaike.com/press/ATNMBL

Didn’t they hire Mike and Maaike already a few years ago, the people behind the ‘rolling room’ concept?
http://www.mikeandmaaike.com/press/ATNMBL

Yes, and they were subsequently bought by Google.

I actually really like their cute approach. Google is not an automotive company, and I see this design as a way they acknowledge that. They’re not designing a car, they’re showcasing their tech.

Anybody caught the selfdriving car cameo in HBO’s Silicon Valley a couple weeks ago?
Hilarious!
In general, I think that show actually keeps hitting nails on heads regarding the tech scene in the Bay Area.

I kinda see where Google tried to go with this, friendly and approachable. Unfortunately, that is not what I would want.
I want a car I can trust, that feels save and equipped to make serious decisions on my behalf.

I think the earlier rendering looks a lot better. Not so face-like. The camera (nose) was in line with the headlight and there was no unnecessary mouth. No idea why they emphasize the face, that car just looks freaked out to me.

It is however very interesting and I feel that if anybody has the muscle to do it, it’ll probably be Google.

After watching their video I think they nailed the design.
Hearing the points that the test users talked about were not about how different it was, but how similar it was with a little better improvement. It may have been careful editing but I think it shows a great way to make a drastic societal change simple and intuitive.

It has a VW Beetle level of cuteness and approachability. Given the amount of scary lasers, cameras and sensors, if it looked like an F117 Stealth Fighter it may be cooler, but probably scare the crap out of people.

Likewise if it looked like a Syd Mead or Daniel Simon machine of the future, we would all love it but the general public wouldn’t know what to do with it.

Also keep in mind this - most cars look the way they do because there are hundreds of laws and rules about what a road going vehicle NEEDS to have. Headlights NEED to be above a certain height - even if the car doesn’t need them to see. Impact and crash ratings need to be met even if it doesn’t drive fast enough to need them. So there are tons of existing constraints around getting something to fit in the same paradigm.

A similar anecdote: My uncle has been developing electric ultralight aircraft, and aviation suffers from a very similar flaw. There are tons of laws and rules in place - including one which specifically measures the weight of an aircraft with fuel. However when the fuel is electricity, the laws had not been changed to allow for a higher weight (to account for batteries but no fuel) which meant the rules needed to change before the form factor could evolve.

I don’t know if it is still law, but Germany had a law that mandated a mechanical connection between the steering wheel and front wheels. BMW ran into the law while researching drive-by-wire.

Maybe Google can put a 3" dia. steering wheel in just to pass the law hehe.

It may have two seats, seat belts, and room for storage, but if it doesn’t have side airbags it’s not legal to sell in the
United States. Of course no one said they were going to sell them…

As long as they stay on the sidewalk I have no problem with them.

when do you think the hoarding of “freedom cars” begin? 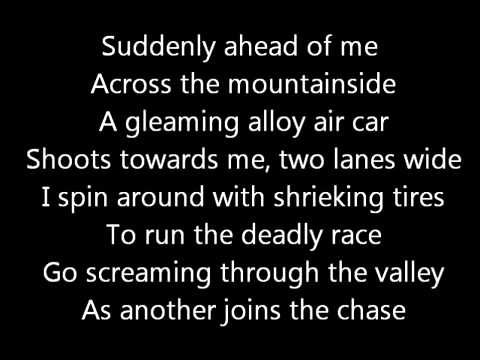 Yo: I’ve actually thought about this. As a car fan and someone who enjoys driving it’s hard to believe us dinosaurs will be allowed to drive the same place as the google-mobiles. I guess I can give up design and drive a car around Central Park or Old Montreal in place of the horse driven carriages they use today!

Having lived in some pretty dense places, I get the desire for an autonomous car. I’ve sat in LA traffic for 2-3 hours… sitting in that I’d much rather be sitting back reading or doing some email vs driving the car myself, I just want it to be a 350+ hp beast that I can flip into full manual mode when there is no traffic… and not have it report my driving data.

Having just completed one week and dreading another three weeks of training in San Ramon (and driving back down the coast to Pismo Beach each weekend (350 miles) sure clues me into the inspiration behind the driverless car, but I don’t think I’d care to be in one while surrounded by the moronic drivers in the Bay Area. I would find it totally unsettling - no way I could do anything other than cringe at the prospect of be rear-ended any second.

Personally, I don’t see how anyone can even drive a Smart Car, or other micro, on the freeways.

I think the person that has a head on collision with a semi will always be the loser.

I don’t think you can say “always”. The Gross Tonnage Rule (in boating) states that he with the most tonnage wins, regardless of who has right of way. The closer the two combatants are in size tends to mitigate damage.

How this guy got himself lodged into the wheel well of this truck is hard to imagine, but I don’t think a full size car would have crumpled to the extent that this car did. Not saying that micros shouldn’t be on the road, just not on the freeway. At least I wouldn’t venture out in one.

The google result seems to have the same to matter what the size of the car. 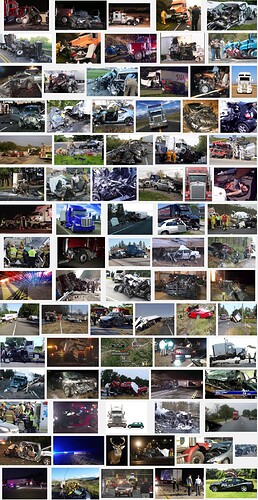 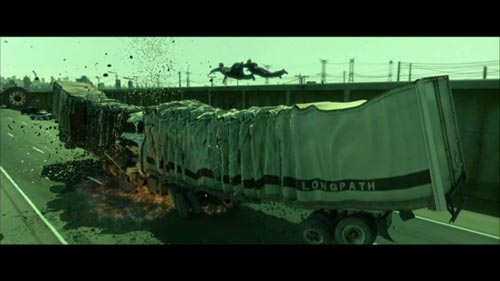 To hit the real heart of the American buyer, Google needs to build something with the weight an presence of an SUV and look intimidating. Guessing blacked out, two inch high windows, Cylon red light scan in front. But that is for the future when they have gained market acceptance. The Wallace and Gromit car look is nice and non threatening for opening the door.