Hello. I’m reworking one of my old projects. I’m taking the advice of Idiot and posting my progress on here, hoping to get a bit of critique of me progress.

This project (temporarily named GoBodies) is an interactive system designed to facilitate Social-psychological development of children ages 9-14 years old. Consisting of a peer networking website and an electronic personal device; it seeks to strengthen a child’s own sense of identity by encouraging them to do the things which make them unique.

Here is the initial design brief that I made for myself:
Design a series objects for use in school environments, which foster development of adolescent identities within elementary school children. This object must be customizable, expressive, and provide anonymity to the user; yet provide a level of unobtrusive censorship, which is appropriate within a school environment.


The concept for this project is based on Psychologist Erick Erickson’s Stages of Psycho-Social Development. According to Erikson, the socialization process consists of eight phases - the “eight stages of man.” His eight stages of man were formulated, not through experimental work, but through wide - ranging experience in psychotherapy, including extensive experience with children and adolescents from low - as well as upper - and middle - social classes. Each stage is regarded by Erikson as a “psychosocial crisis,” which arises and demands resolution before the next stage can be satisfactorily negotiated.

This projects focus on the stages critical to adolescent development:

Competence: Industry vs. Inferiority -Childhood (6-11 years)
The child must deal with demands to learn new skills or risk a sense of inferiority,failure and incompetence.
• Through social interactions, children begin to develop a sense of pride in their accomplishments and abilities.
• The child who, because of his successive and successful resolutions of earlier psychosocial crisis, is trusting, autonomous, and full of initiative will learn easily enough to be industrious. However, the mistrusting child will doubt the future. The shame - and guilt-filled child will experience defeat and inferiority.
• Child learns to master the more formal skills of life:
o (1) relating with peers according to rules
o (2) progressing from free play to play that may be elaborately structured by rules and may demand formal teamwork
o (3) mastering social studies, reading, arithmetic. Homework is a necessity, and the need for self-discipline increases yearly.
Fidelity: Identity vs. Role Confusion Adolescents (12-19 years)
The teenager must achieve a sense of identity in occupation, sex roles, politics, and religion.
• During adolescence, children are exploring their independence and developing a sense of self.
• Person comes to experiment with different - usually constructive - roles rather than adopting a “negative identity” (such as delinquency)
• Those who receive proper encouragement and reinforcement through personal exploration will emerge from this stage with a strong sense of self and a feeling of independence and control. Those who remain unsure of their beliefs and desires will insecure and confused about themselves and the future.


At this point I started looking at digital objects that took advantage of social networking.

Here’s where I am:
This is how the system will work.
A. Kids are encourages to journal/blog about their day on the social networking website.
B. Children are awarded points based on their blog entries.
C. Points can be used to update avatar and unlock function on physical device.
D. The physical device exhibits the activities / interest of the children by changing colors and displaying avatar. 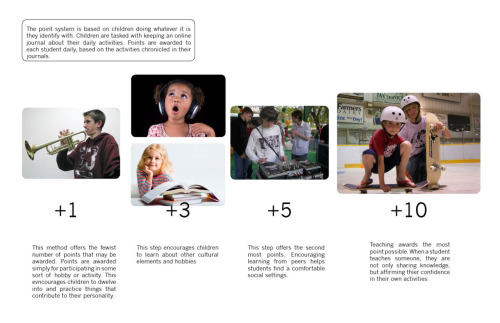 The point system is based on children doing whatever it is they identify with. Children are tasked with keeping an online journal about their daily activities. Points are awarded to each student daily, based on the activities chronicled in their journals. 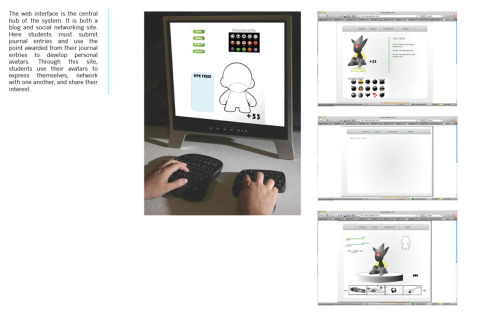 The web interface is the central hub of the system. It is both a blog and social networking site. Here students must submit journal entries and use the point awarded from their journal entries to develop personal avatars. Through this site, students use their avatars to express themselves, network with one another, and share their interest.
I’ve included a quick draft of the webs sites appearance. I will come back to this as I want the appearance of the website User interface and appearance of the dongle to coincide 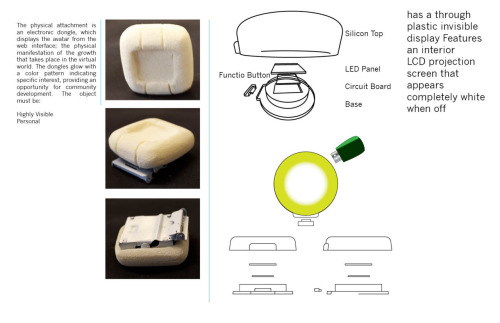 The physical attachment is an electronic dongle, which displays the avatar from the web interface; the physical manifestation of the growth that takes place in the virtual world. The dongles glow with a color pattern indicating specific interest, providing an opportunity for community development. The object must be:

It will also have to be removable, as it will feature as USB dongle so that it can be synced with a computer and updated daily.


My first thought was to make the object an attachment that attaches to a students book strap.

This solution would only be visible on a book bag when the student was wearing the bag. I also interviewed a few junior high students who did not like the idea of a dongle attached to their bag. They thought it was to “techy” and another unnecessary school item to keep up with. This solution was a bit rushed and not thought out very well. So I went back to the drawing board.

Here was an inspiration board I created to help we with my design of the physical object. 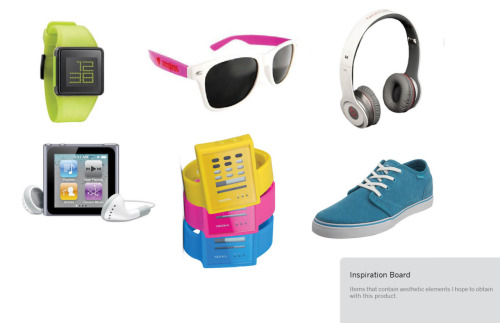 I from the inspiration board I found that a wrist watch would make the perfect form for my dongle. Watches are both highly visible since they are fashion items, but also very personable. Giving it a watch form also means I don’t have to add another unnecessary item the children to carry. This also means that the form would have to compete with other fashionable watches. By making the dongle a fashionable item, I a able to distant it from being perceived as another “tech” objects.

The other words I would like the watch to embody are

Here is another board, which serves as both inspiration and product bench marking. 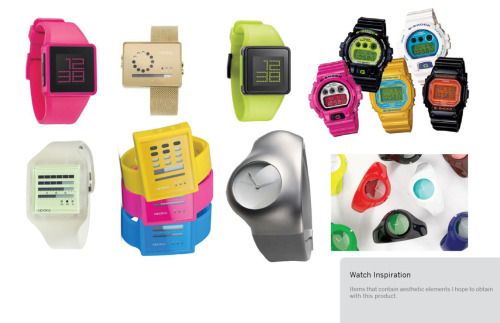 First round of ideation sketches 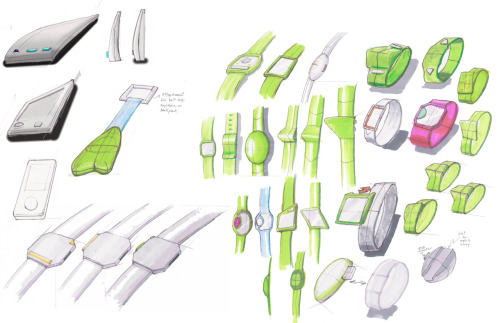 More sketches. I started playing around with the actual watch detaching from the band, as well as the band itself. 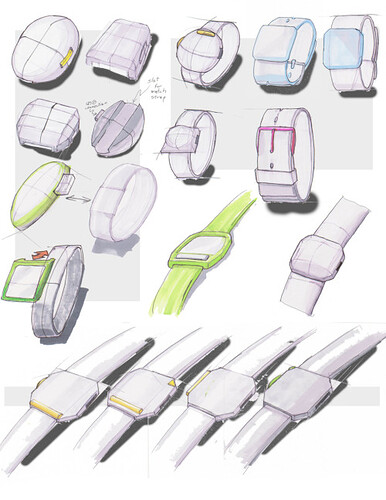 I started to focus more on the aesthetics of the screen. I don’t want to much going on with the form of the watch. I want it to be as clean and simple as possible. I tried to experiment with combining geometric shapes in the watch face. I would like the watch to be able to change colors some how.These sketches have either a translucent housing or a translucent ring around the lcd screen. 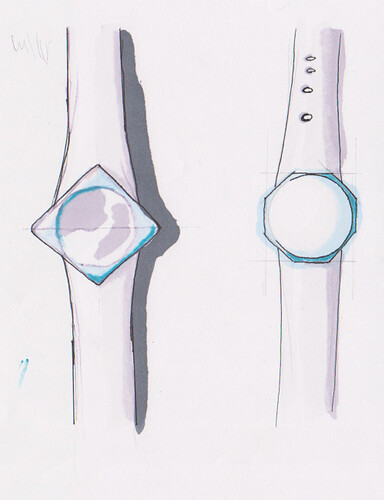 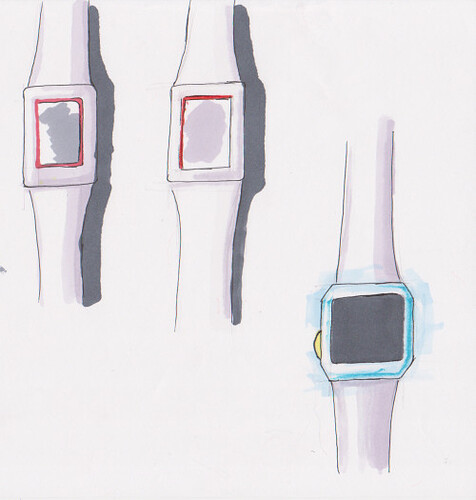 The last few sketches reminded me of these; which isn’t the aesthetic I’m going for. Color changing led’s provided the simplest option color change, but must be implemented a bit more subtly. 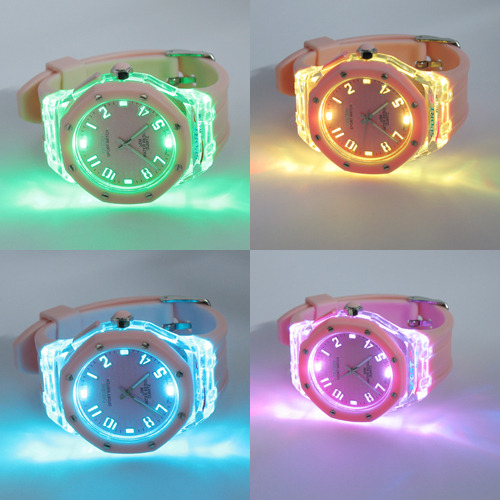 These sketches feature a lcd screen which is flush with the watch face surface. The walls sides of the watch housing are translucent with leds embedded inside. This allows a thin beam of light to escape. I think this is more subtle but still noticeable. 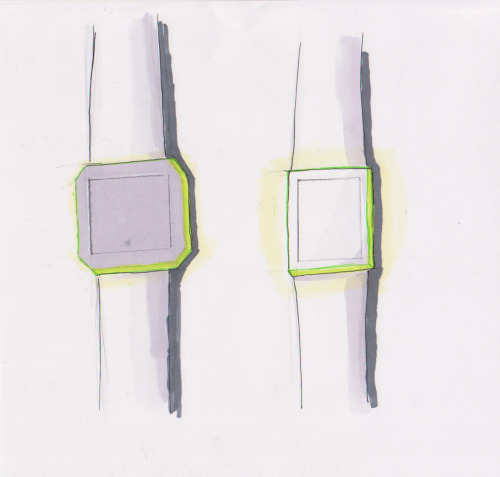 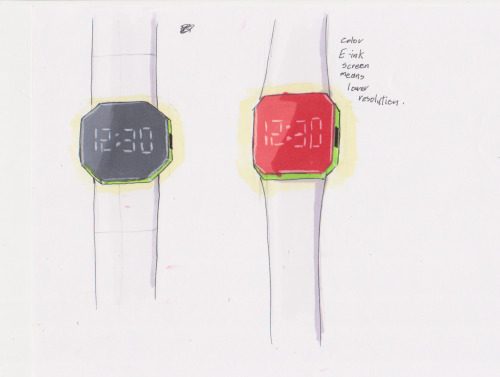 I’m trying to nail down a basic form for the face of the watch. I going to show these sketches to kids this weekend and get their opinions. 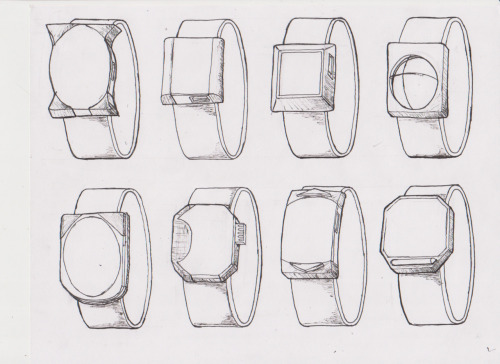 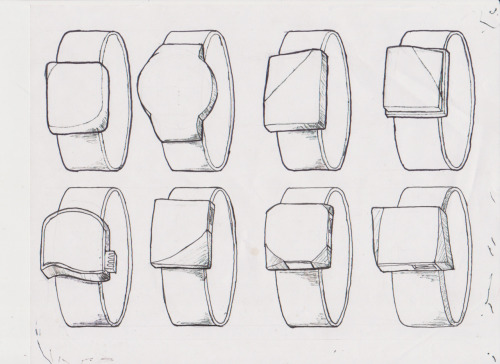 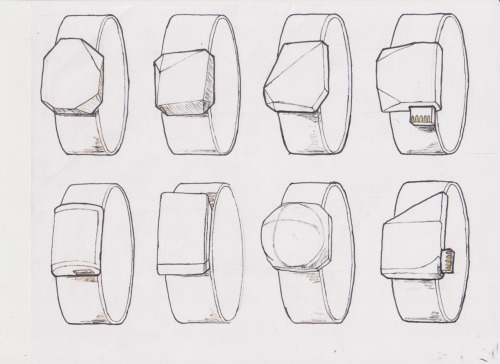 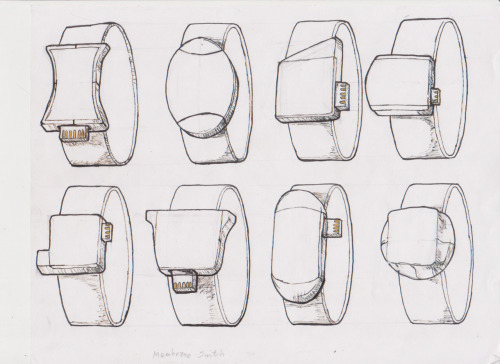 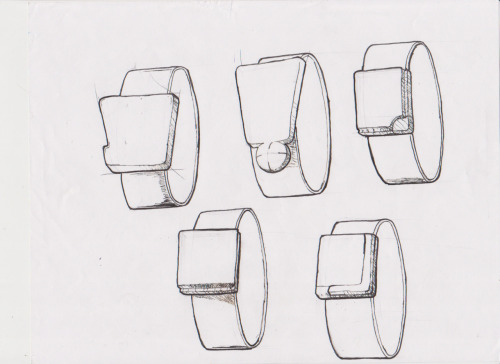 What year are you? The sketches are very crude especially when you are trying to show more complicated form. The CE modules all sit on the straps with no interaction between the two while many of the examples you show have at least some minimal response between he two elements. Showing 30 line drawings to kids with minimal variation all hovering around the same concept will probably not be that fruitful. More important is to understand their world. you need to make something either so cool that they want to wear it and it becomes a have to have, or so in tuned with the market that it doesn’t stand out to avoid the risk of “your a nerd because you wear a GoBodies!”

These sketches are loose, but take a look at the level of detail that Phil explores and the sophistication in the interaction between individual elements:
http://www.coroflot.com/philfrank/development-/8?keywords=phil+frank& 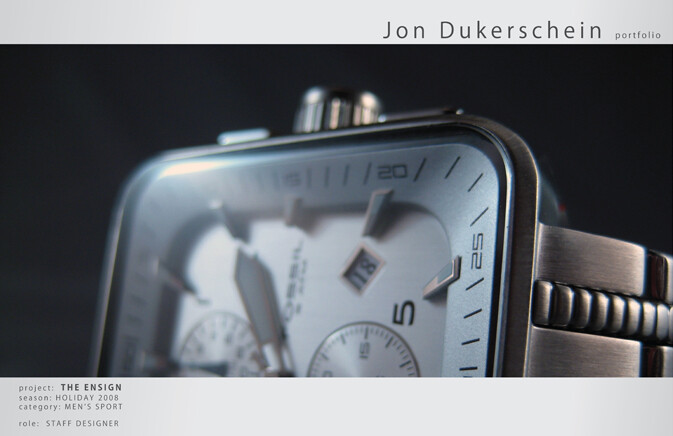 eventually you will have to get to a level of detail like this to full explain the physical device: better to show 3 or 4 highly different concepts at this more defined level so people don’t respond to the sketch itself: WATCHES part 2 by Alvin Gilbert Gonda at Coroflot.com

Thanks Yo. I’m a graduate but my I feel some of my skills need a bit of work. That’s why I’m working on mock projects and posting them here to get a bit of feed back. You’re right about rushing to get opinions before the concepts are ready. I need to make some design decisions first and take them to a more developed stage before getting opinions. I wasn’t really sure if anyone was paying attention to this post, but I will be posting more soon. Any help or criticism is greatly appreciated.

Doing these kinds of projects is a fantastic way to build skills. Push the sketch level up. If you do show some target users, it is better to show 3 or 4 developed concepts that are totally different from one another. Don’t use it as a down select session. The purpose is to provoke discussion to fuel your process.

When developing the solutions, think of the function of the form. Put yourself in other designer’s shoes. “how would Dieter Rams design this, how would Stark, Morrison, Newson”. It might help you develop some directions that ate more distinct from one another. Also, develop the brand and brand principals. List out key words that you want the product to convey and then try to loosely apply form to those words… Then coach that into workable concepts.

By alternating approaches you push yourself into different concepts and avoid sketching minor variations over and over.