…When I saw this video I thought, there guys need to be wearing some masks. Fiberglass is some nasty stuff.

Nah, they are cheap Mexican laborers, management doesn’t give a shit.

Has any one seen the ones
made of PP, that vitra is currently offering? They are
awful. Not even near to the original quality. And they
don’t offer them at a discount, not at all.

I have tested the Vitra one. Why do you say the quality is bad? They seemed very well made to me. They obviously are not going to look or behave like the fiberglass ones as it is a completely different material.

I am considering breaking in and stealing few original ones from the local vintage shop. He has tons of shells stacked on top of each other

I am also confused by this statement about quality. Vitra, you could argue, is making the “originals” as they own the license together with HermanMiller. Just in PP, not FG.
Personally, I prefer PP over Fiberglass, mostly because of durability and sustainability reasons.

Out of my experience, Vitra has always top notch quality. I am a huge fan of their blend of new and old design.
Granted, with a hefty price tag. But then again, in Switzerland, you won’t see any “cheap Mexican laborers” though. Also worth something.

I’m really surprised by the amount of people on this forum advocating “buy the ripoff”.

If something is in the public domain, then by all means buy it from whomever you like. Copyright/ Patents/ Design Protection have a limited lifespan to encourage innovation by providing a temporary monopoly. Once expired it belongs to all.
But if it isn’t in the public domain (and the death of the designer doesn’t necessarily mean it it is) buy the ‘real’ one.

Final thought- in the industrialised first world, we live in an age of abundance never before seen in history, regardless of current economic woes. Don’t nickle and dime it by buying crap, buy good stuff that has value.

It’s not that simple. The Eames chairs aren’t protected by patent or copyright, which is why there are knockoffs being produced without any threat of legal action. A design or utility patent, if there were any, would have expired sometime in the 60s. And of course, the Eameses are long dead. I don’t know who gets the Vitra / HM royalty checks now (Eames Demetrios maybe?), but I wouldn’t say there’s some clear moral obligation to buy a licensed one.

I know the law has been dicked around, but the original intent of copyright and patent laws was to give the original creator a limited period of exclusivity. I tend to think 20 years is fair, and with this chair we are well over 50 years, and that’s more than fair. If someone wants to knock me off 50 years from now, you have my blessing in the archived copy of this thread.

Besides, in this case nobody produces the “real” thing anymore- the Modernica version is decent, but the bases aren’t quite right, and the HM ones are plastic and that’s not right at all. The ones posted by the OP aren’t even knockoffs really. The seat shapes and bases are all different. They are pretty awful though, obvious clunky Chinese OEM stuff. Personally I’d spring for better quality, regardless of perceived moral issues.

This is what I really want for my place.

You are not the only one

Agree with everything he said.

Currently I am down to these two suppliers in Europe-

Around $80 for plastic version-
http://contemporaryfurniture-uk.co.uk/dining-chairs/87-replica-eames-dar.html

Around $190 for fibreglass version-
http://iconicinteriors.com/our_products/category/dining_chairs/eames_style_dar_dining_chair/

I am tempted to go for the $80 plastic one but not sure if the company is legit. Some of their gallery images are taken from Vitra website, like this one-
http://www.vitra.com/_assets/published/19/46dfc3dc881db2e.jpg

So if they are using such tactics then not sure I can trust them.

Agree with everything he said.

We are arguing the same point. It now comes down to value- do you buy on price only, or spend a bit more to buy something that is well made, by a manufacturer that supports designers?

look at all the “Eames” chairs!!

If you’re into it, try looking on craigslist or vintage stores for some originals at a good price. Some people know the value and so their not inexpensive, but if you’re luckily, they don’t know and you can score a deal. Of course, there will be more or less available depending on where you live. I feel like getting the “knockoff’s” is fine. Not everyone can afford the real deal, so why not. As stated, because of their original intent I would feel less bad. Anyone know of a good saarinen tulip table/chair knockoff by the way? haha

Try Ebay… but watch out for “Eames like” or or “eames sarinnen herman miller knoll” type adds… they try to mislead with the wording. Also to you Austin/Minnepolis/Raleigh people - IBM has surplus sales all the time and let go of some amazing 50s modern stuff from Saarinen/Eames/HermanMiller/Knoll for very cheap

so anyway, I bought a knock-off Burke Saarinen-like Tulip table back in the day, and I have regretted it ever since. The real thing would have cost a couple hundred more, but I didn’t think I could swing it at the time and forever regretted the decision.

Go for the real thing, and even if you get sick of it, it will still have resale value.

50’s modern nerds can geek out to some of the details on the vintage pieces however, for example I have an Eames aluminium group chair with 4 legs in the base - but they changed it to 5 later on for more stability.

Just find some old HM ones for cheap and pop the base pads off and re-glue them to the alternate location and get the eiffile legs from modernca. That’s what I would do. I also find good stuff when I walk around places. (I have two mustard colored ones with the stacking/locking bases) and I had a avocado green leather arm chair with swivel base, all three where found in the trash. I have also found a few neat sofas and a Knoll Bertoia diamond lounge in the trash…


But to answer your question, get the real one, even if it’s one at a time. They hold their value better for resale, and it’s something that you will use everyday, and you could use everyday for the rest of your life. but I would jump on that fake RAR for seventy quid, you can save and dump that later for like 50GBP on CL

Get 'em while they’re hot. 3 sets on eBay right now.

Just the Eiffel part … build your own.

Just the Eiffel part … build your own.

Interesting TEDtalk on the subject that was posted recently:
http://www.ted.com/talks/paul_bloom_the_origins_of_pleasure.html

Surprised nobody mentioned this yet: 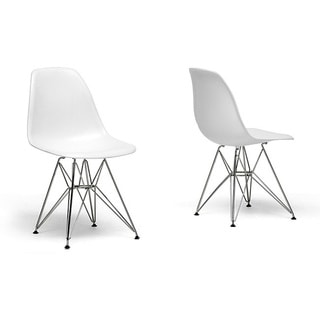 Shop for Ronnie Wire Base White Chairs (Set of 2) and more at everyday discount prices with free shipping over $50* on Overstock.com - Your Online As Is Store!

Overstock is also selling a shameless dead knock off of Grcic’s Chair One for Magis:
http://www.overstock.com/Home-Garden/Williamina-Aluminum-Chair/3829168/product.html

Really surprised Magis didn’t put a design patent on that one (apparently).

Get the real thing. If you buy a knock off, you will always have that in the back of your mind as long as you have the chair. You’re likely not buying the chair purely for its function since you require such a specific design. If you like the chair because of the design and it’s place in design history then pay for the real deal. If you really shouldn’t be spending that kind of money on a chair at this point in your life, either put off the purchase or scour the internet for a good deal on a second-hand one. I found two white Magis Chair 1s for $175 on craigslist when I was in grad school. I love a deal!

I am Agree and i am also with you bro…

I’d go with Modernica. Interestingly enough, they actually bought the Original Eames fiberglass molds, and had been using those to make their “knockoffs”. So the Knockoff was more original than the genuine ones? Unfortunately those molds finally had to be remade, but at least they had the original to base the new molds off of.