Just finished these sketch illustrations of existing products to be implemented as full scale (8’ high or so) in hallway/lobby of the GE Research Center (GRC) in Albany, NYC.

One more still to do, but so far client and I are very happy with the results.

Sketches were done over a photo in SBP, on a Wacom Intuous tablet, with some added PS magic after. Each sketch took approx. 4-6 hours. 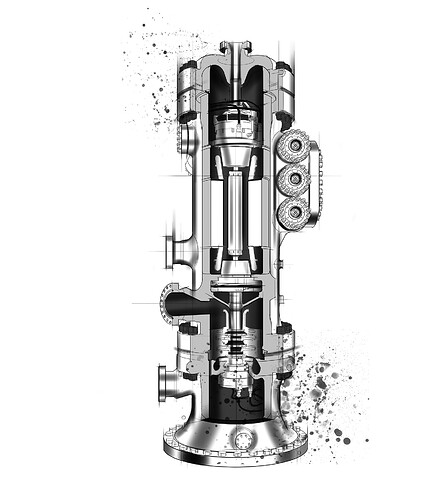 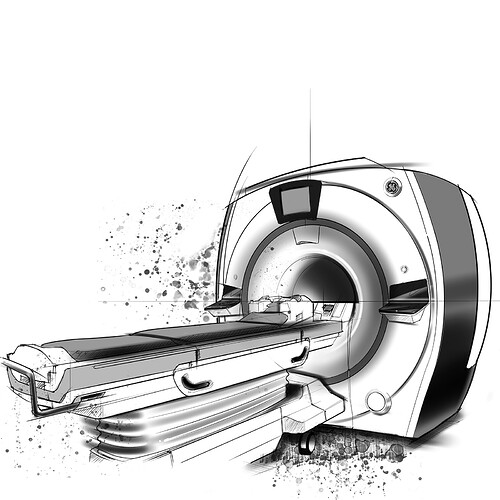 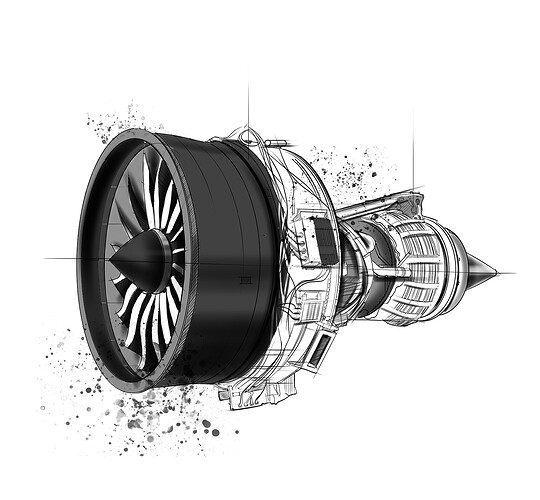 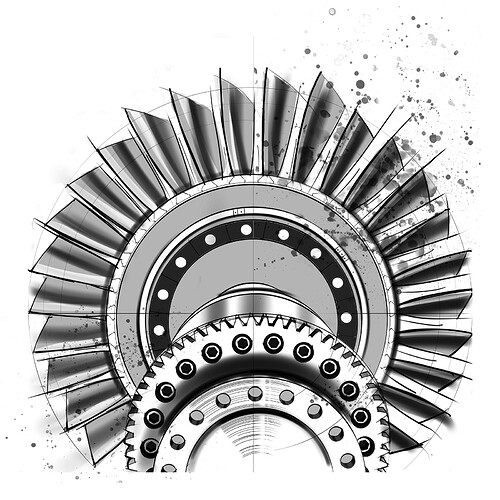 Very cool. What’s the pixel size of the 8-foot files?

6400x6400px. Would have been larger ideally but largest sbp allows as a canvas and stitching together multiple pics would be a big hassle.

Those are gorgeous drawings, Richard. How will they be presented? Large panels?

Thanks. From what I know, they will be reversed to negative and set as white sketches on a grey wall. I’m expecting some renders of the concept soon and hopefully photos of the final install and will post when I get them.

From what I know they are supposed to go alongside of original patent drawings and sketches from Thomas Edison (original founder of GE) which is pretty cool!

Very cool! I especially like the the second drawing of the entire jet engine/turbine (?). The line work that makes up the engine’s guts looks all that more intricate contrasting with that bold black cylinder.

What kind of computer are you using? I think mine would explode if I tried to do something that big?

Also, those splashy ink marks are cool, what were your thoughts behind that?

Sweet Digi sketches R! - What a great little gig.
Perhaps the sketches with the dramatic perspective could be made even more dramatic if the foreground values were made just that little bit darker - in order to lead your eye into the picture a bit more. (just a suggestion btw -feel free to ignore!)
EDIT : Then again, if the drawings are going to be inverted maybe my suggestion is not so relevant…
2nd EDIT : just inverted 'em to see and they were looking good with the slight value change i thought. 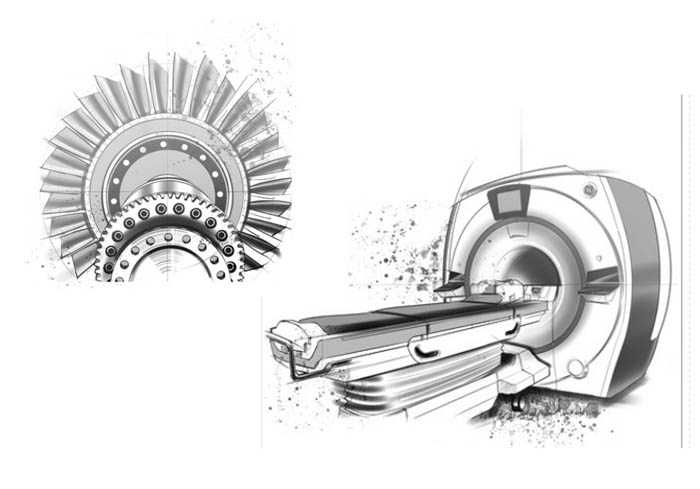 Here’s a look at the application.

Also, before starting the project, I did a quick test to see if I could pull off the style they were looking for. Original Art Direction was ID Sketch X Da Vinci.

The splashy ink thing is something of a personal trademark. I’ve been doing it since I saw it in some marker rendering book I had back in school 12+ years ago, and carried it through to my digital workflow. I have a bunch of real ink splotches I made scanned, and ready to pull into PS to use on digital sketches. I find just adds a looseness to a sketch and also helps make a “background” without creating a big block of shading. 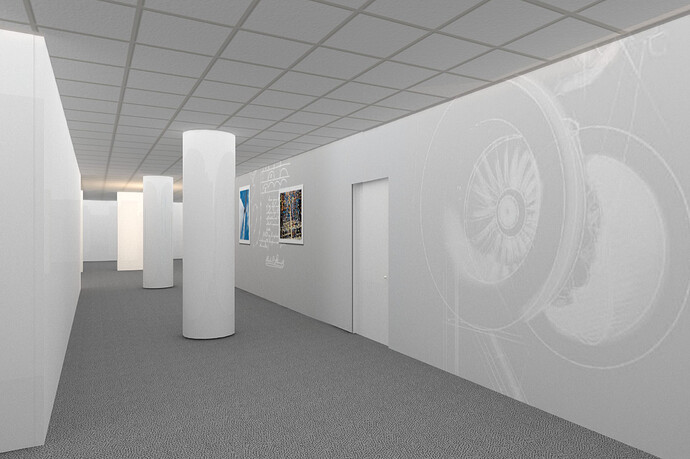 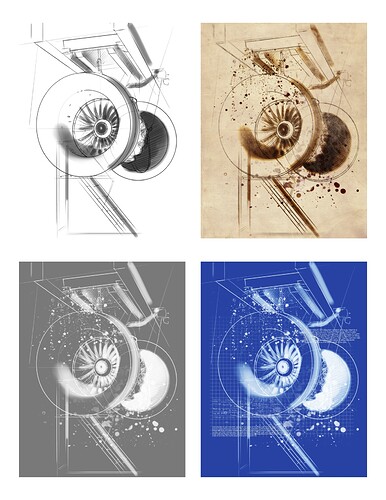 That coffee stain/DaVinci style option is too cool.

Thanks for all the love. It was a fun project.

Last image should be done tomorrow and will post when complete. It’s a super detailed gas turbine of some sort with a lot of fan blades that is pretty tricky.

The light tonal invert on the wall is really nice!

Here’s the last one, still needs a bit of tweaking.

Also, the grey invert, they actually didn’t do correct in the renders. They should have done as “overlay” in PS, but I think they just adjusted the levels so lost some contrast. Here’s more how it should be. 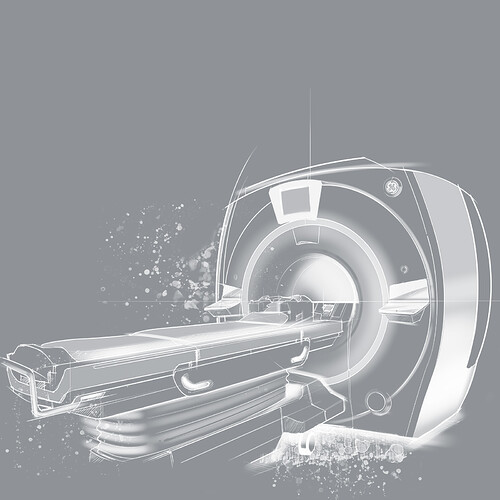 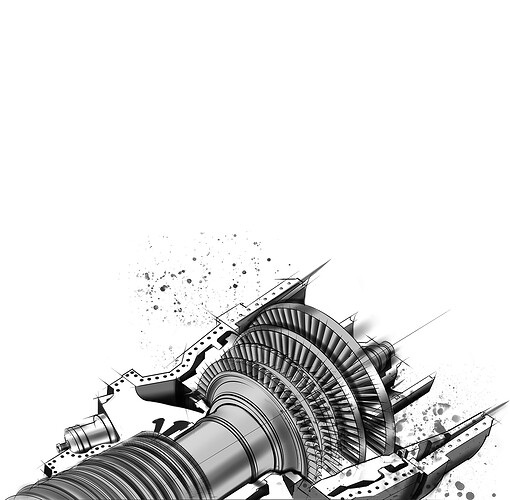 Some serious efforts there, R . Good work.
It’s not easy to work with that PX size. Be careful with saving terms with SB Pro.
If possible, extend your airbrush strokes beyond the main sketch…or try grunge brush or background.

Awesome work! I think the last two images posted are my favorite. My dad used to work at GE R&D so I’ll have to see if I can see these in person sometime soon

You get an “I like” from me, too. Nice exposure to have them in the G.E. headquarters.
Did you sign them?

Do you have an idea what these will go for as “vintage items” after the next renovation
of the building 40 years on? (Just kidding.)

Can we get pics once they’re installed? Those are gorgeous drawings! Nice work.