Anyone have this white G1 Google phone in this color scheme? If so, would you happen to know which Pantone number the metallic part is? Is thre an equivalent Pantone Metallic? Thanks for your help! 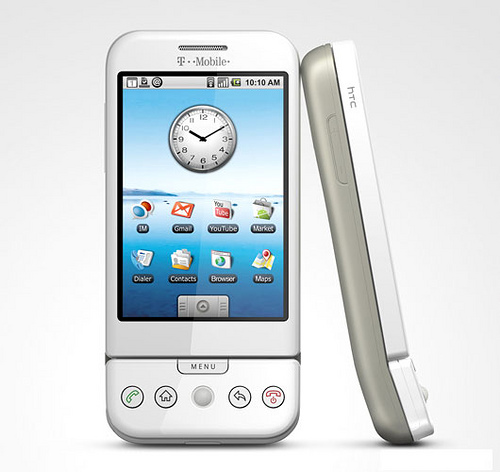 I think it’s this:

I’m a fan of HTC as of late, but why this little detail? It’s so strange

I think it’s because there doesn’t seem to be an overall style concept - the definition of the kink is fighting with the blobness everywhere else. Looks like overphotoshopping hasn’t done it any favours either.

The kink, and the odd menu button on the front that comes out of nowhere.

yep, same phone, and I think the screen does slide up to reveal a full qwerty board… with all the new phones that run Android, this is still T?HEIR phone, since it was the first.

Yeah the part line is due to the keyboard. I’ve had this phone since the summer, I got one for free after t-mobile royally screwed up my billing for 5 months straight. For being free I can’t complain, but I will

It feels really really cheap, and creaky. I have the brown version, which, to be honest has actually grown on me. The trackball is completely useless, and the keyboard is a nightmare to type on… and dimly lit.
As for the finish, the back is soft-touch, I’m not sure about Pantone. You may be able to ask the same question at www.androidcommunity.com, there are some pretty die hard G1 fans over there.

If you’ll notice i’ve cropped this photo to highlight the actual product. 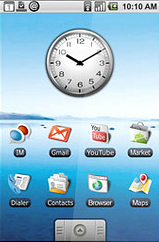 wow, you made it worse.

by the way, I’m calling BS on your statement. I don’t care if that thing makes me breakfast, hard to put that down on the table with any semblance of pride.

wow, you made it worse.

by the way, I’m calling BS on your statement. I don’t care if that thing makes me breakfast, hard to put that down on the table with any semblance of pride.

Just pride of a different kind.

how is your Zune working out?

Anyone have this white G1 Google phone in this color scheme? If so, would you happen to know which Pantone number the metallic part is? Is thre an equivalent Pantone Metallic? Thanks for your help!

First off, there is a metallic pantone color chip set that you can buy for a ridiculous amount and is what would probably be the best way to spec a similar color. Maybe a local design resource, like a friendly consultancy, might give you hand if they have the set.

about the design of that phone, I kind of like the kink in the bottom of the phone - besides the fact that it doesn’t seem like it’s going to feel better in the pocket with it, and I can’t imagine why that would help any functionality in the slightest. It ads a little bit of character to an otherwise kind of boring soap-bar phone

PS - I wanted to like this thing when it came out a couple years ago, and like a lot of the stuff the Mike and Maaike do, but I don’t really care for it either…

I’m with you. I was pulling for it.

While I don’t have the Pantone you’re looking for. The reasoning for the kink in the phone (and you’ll see it on other HTC phones released around the same time) is that it protects the screen, scrollball and buttons when it’s placed down.

Maybe they wanted to be different, maybe they weren’t trusting enough with the robustness of their scrollball, maybe, maybe…

I agree the kink on the lower part isn’t very comfortable for the eye, maybe it makes sense to have the white part with a little angle, but the grey part feels not right, maybe they should have keep it without the slight angle, or maybe its the over photoshoped that makes the shape not very clean.

As for the Pantone… I know the metallic coated Pantone are in the 8000C numbers, but couldn’t tell which one exactly from the pic.