frustrated in the past, time travel screwed me over

Yesterday I was daydreaming about getting in a time machine and going to the past. And I was thinking about how I could make a lot of money knowing all of the things that I know now. BUT THEN, I started thinking about how I don’t actually know how to even start making a tv, radio, anything related to a computer. I think that if I dedicated my life to it, in the past, I might be able to make a printing press…but maybe not- probably not. I think for me the best time to go back to would be a time when people were impressed with wheels, pulleys, levers, other things like that. I guess I could invent rock and roll but that’s different. What time in history would be the best for you to go back to?

I’d like to go back to the '50’s. It’s strange how it seems like the global problems were much larger, but people seemed more optimistic. I didn’t live through it though, so I don’t know how people really were.

From a career standpoint, most of us IDers would be geniuses at plastic injection molding. That would be a big benefit. I can see myself now convincing some poor slob machinist, “no, we’ll inject the whole chair at one time! I know it will work!”. hehe

15 years from now . Even better would be future you transporting in a time machine to tell you how to rock the next 20’s.

If it came down to brass tax & I had to go back, from a purely aesthetic standpoint, just at the start of the streamline moderne movement / height of the art deco. The shape of things to come, the world of tommorrow. The future was so great back then.

I’d just go back 5 years and buy as many shares of Google as possible with the money I would have spent on college. Then sell it all at it’s peak.

How to time travel:

Step 1: Write yourself a note reading “TIME TRAVEL TO THIS DATE AND PLACE:” and write the current date, time, and place.

Step 3: Realize that a note is silly as yourself from the future is standing right in front of you! (But keep writing and keep it on you 'cause time paradoxes are usually messy)

wow, I was drinking last night at our school pub…Sorry for that.

How to prove it won’t work (or at least that you won’t ever do it):
Tell yourself right now that today is your time to decide whether you’ll ever do it, and you’ll only do it if your future self shows up to let you know that it will be possible in the future. Then look up. If your future self doesn’t show, it’s because you can’t do it, otherwise they’d show up to let you know that you shouldn’t give up trying.

Or what ever they are saying on Lost. I love the show and a Lost junky but I swear it is going to make my head explode. 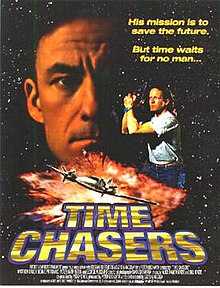 Time Chasers (originally released as Tangents) is a 1994 science fiction film directed by David Giancola and starring Matthew Bruch, George Woodard, and Bonnie Pritchard. The film premiered in Rutland, Vermont on March 16, 1994 to three invitation-only showings, and in open release in Rutland theatres the next day. The film follows the adventures of an amateur inventor who goes through time with his female accomplice to stop an evil megacorporation intent on changing history for profit. T Physi...

If it’s just about money, it’s easy. Go back to 1995, start a bunch of internet companies (there were a lot of ideas floating around then, and you know which ones are good), then sell them via IPOs circa 1998. If you can convince the boys to sell out, use your proceeds to buy Google in its infancy. If not, ripoff their idea a year earlier, and copy all the stuff they did that worked. You are now one of the 10 richest people in the world.

If it’s about making a difference, I don’t know. What would happen if you go back and kill Hitler as a kid? Does someone else fill his role in history and do more or less the same thing? Does something worse happen instead? It’s probably a good thing backwards time travel doesn’t work.

There is actually an interesting Isaac Asimov short story with that conclusion… and if you know which one it is, you are as big a dork as me.

You know, I think I read it when I was a kid. And I’m quite sure I’m a bigger dork than you.

This weekend I watched the movie “The Final Countdown”…it was pretty good. I especially like watching Martin Sheen, because of how much Charlie takes after him. Anyway…cool time travel movie.

As for the advice in going to 1995, thanks, I think that could work out for me. I mean, if I couldn’t figure anything out and I was stuck in 1989- I could work as one of those Nintendo game helpers that people would call. My understanding of Metroid, Bayou Billy, and Mario 2 alone would get me the job.

If I could go back in time , and presuming I would know what I now know :

I 'd try and locate the earliest exact point in space and time where my consciousness became part of this body I now find myself in.

Perhaps then I might have a much clearer and consistant idea about who we all are , and where we’ve all come from.

Exactly what I was thinking!

maybe you already have or will, and the older you is just outside watching the younger you… Deja Vu

man I gotta quit watching so many sci fi’s
PooK