Sometimes after work I crack a beer and aimlessly surf the internet, usually starting out on Fark.com.

And so this is how it went:

Crowds of wailing mourners take to the streets, pulling their hair and crying...

Crowds of wailing mourners take to the streets, pulling their hair and crying to heaven on the news that their sovereign, Paddy Roy Bates, Prince of Sealand, has passed away

Browse hundreds of islands available for sale and rent worldwide. Private Islands Online is the most comprehensive guide to buying, selling and renting private islands. Explore the possibilities...

And then I found this: 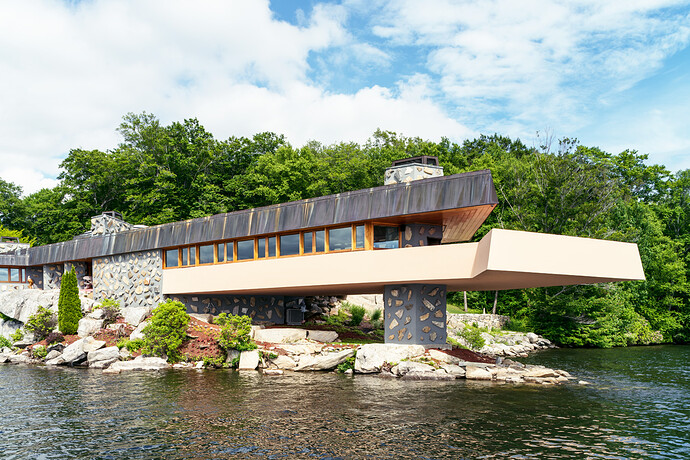 New York's spectacular Petra Island is a mere 15 minutes from Manhattan by helicopter and features two...

Anyone got time to do some more Google fu?

Damn. There goes my night searching for islands. I can get two here in Ontario for the price of my loft! Wonder if that comes with parking and Internet?

There are 10M islands in Minnesota.

It’s so hard being rich. I’m glad I don’t have any islands to worry about.

So apparently the island was purchased in 1996 for 700K. That’s not including the huge 5,000 SF house. That was constructed after it was purchased by a guy named Massaro. It is not recognized as a FLW home by the FLW Foundation because Massaro did not pay to have it certified. He had it built based off of drawings he was given during the purchase of the island. 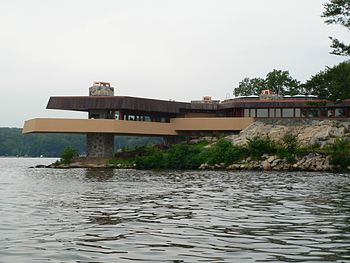 The lack of official certification on the main residence definitely should affect the asking price but you’re still talking about over 6,000 SF of luxury living on an island with a helipad. So its probably still a large price tag…

That’s my thinking. Not official FLW. The real FLW home is only 1500 SF. Tiny. Even total, 6000SF isn’t that large. It’s the size of a large suburban home in any city. Not a mansion.

Plus, looking at the photos, it looks pretty ugly/dark/dated. Would probably need a substantial reno to bring it into this century. Note they don’t show any of the things that cost the most to fix - bath/kitchen, etc. Could probably spend an easy $500-1M in renos. Maybe more since all materials and equipment needs to be brought in by boat.

I actually think my first estimate of 10M is probably high.

Funny points in the wiki article about the criticism of design…

Wright purists argue that Massaro’s 26 skylights are domed; Wright designed skylights that were flat.
Massaro counters that the flat ones leak.
So what? Storrer said. Modern sealants can prevent leakage. Otherwise, let them leak and be Wrightian, or don’t claim to be Wrightian.

R- You do the renos in the winter when the lake freezes and you can drive across it. That’s how it’s done here.

If you google Petra island, there are lots of articles about it. Mostly the controversy of how its not a real FLW, how it’s been on the market forever, nobody knows the price, etc.

I was thinking of calling the private island company to inquire (for some reason, they are actually here in TO), but with all the press figure they wouldn’t be so forthcoming.

I dunno if the lake would be that thick in NY. I wouldn’t want to be on a truck carrying 10T of drywall driving across a lake, that’s for sure! I would think better to barge it across in the spring.

Good research, very interesting. I find it strange that he’s dumping it only a few years after completion after all of that effort.

I would have continued the research, but the VP debate came on and by the time it was over I had had too many

I think a classic case of expecting too much… he built a wannabe FLW house, thought it would get him millions and the purists aren’t biting so he’s expecting the world. Not unlike any other flipper who thinks their place is worth 10X what they paid for it just because they did a quick home depot reno with granite kitchen.

… he built a wannabe FLW house, thought it would get him millions and the purists aren’t biting so he’s expecting the world.

Wright was a master of subtlety, materials, and site planning…

With it’s “glued on” masonry, this 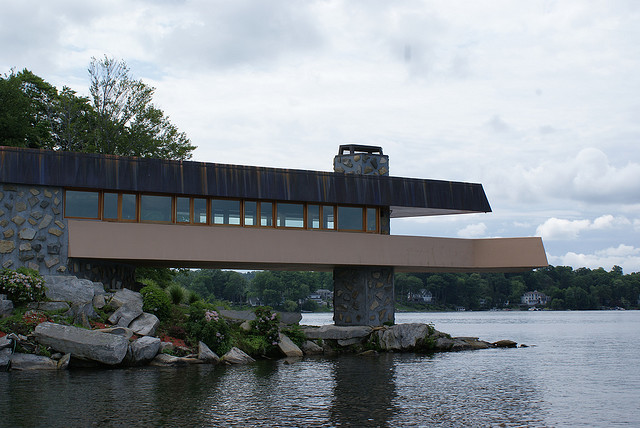 comes no where near this… (which I’m sure was the inspiration for this structure). 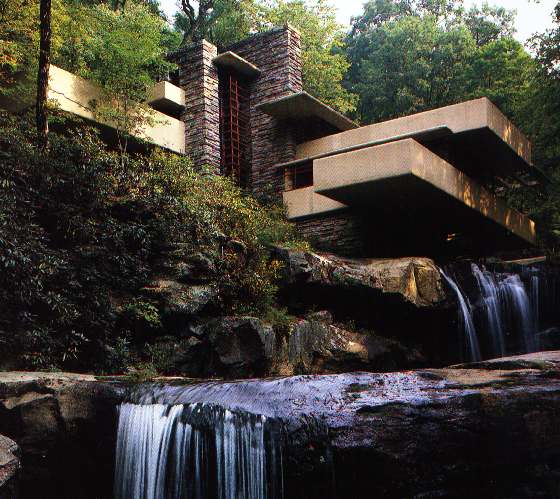 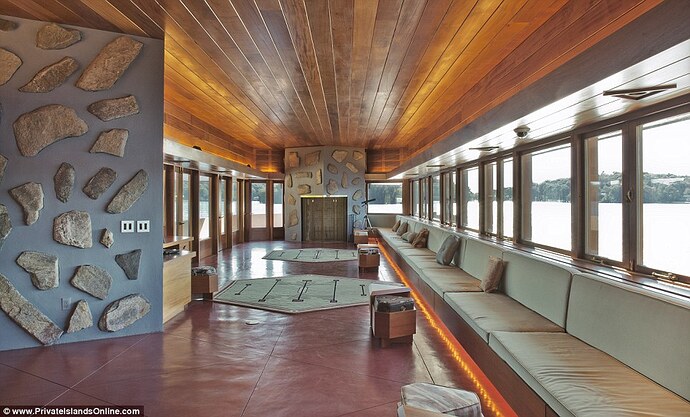 in comparison to the genuine article. 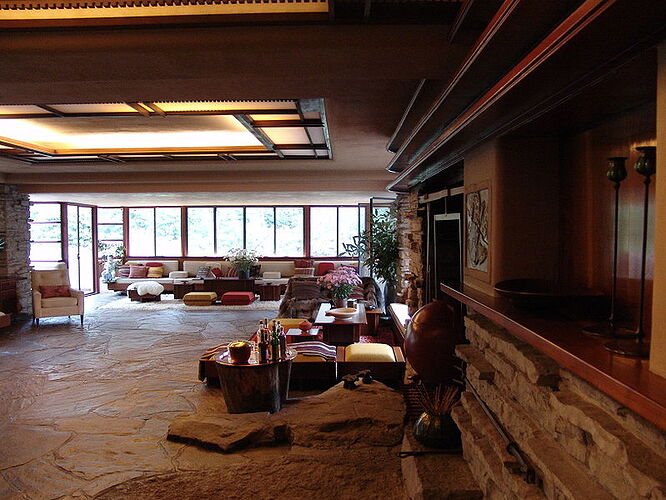 But… to each their own.

He aimed high and obviously failed. But that must not have necessarily been cheap. Paying an architect who is no FLW to built a structure like that will still be expensive. And the materials will have cost quiet a summ, also. For sure he followed a romantic idea. I’d love to see the project saved in a more wrightian way by the next caretaker.

During a tour of Falling Water years ago I had to stop the tour guide and chastise her for incorrectly describing why its main cantilever had dropped 7" off horizontal…She said, "although Mr. Wright was a brilliant architect, he apparently didn’t realize that the home would settle quite like it had, resulting in this dangerous situation which the Kauffman Foundation has since stabilized (they’d added drilled concrete supports in the creek-bed that extend upward to keep the cantilever from continuing its settling, although it hadn’t settled any further)… I reminded her that Mr. Wright’s plans called for the cantilever to be 7-10 " north of horizontal - he KNEW it would settle and knew by how much, it was a construction error both of the level off horizontal AND a lack of adequate steel reinforcers in the concrete. it’s since been fixed.

Kentuck Knob (also in Pennsylvania) is another of his great works, I highly recommend a visit.

I’ve renovated some properties (flips, rentals, etc) and I think you guys might be selling this NY guy short.

We don’t do drywall in a FLW home or even a FLW inspired home - it is earthen, boulder, concrete, wood, glass, etc. His few randomly-spaced-rock-veneer-stucco’d walls could easily be demo’d and replaced with accurate stacked-stone walls, so that’s not a big killer. FLW’s Taliesin West was probably the base template for this plan - it looks awesome. And since the house was built in 2008 there should be NO renovating necessary - some light duty detail work, maybe a few FLW embracing parts and pieces here and there, but otherwise you’d have a very FLWish private home with guest cottage on an island 30 minutes from NYC.

Was reminded of this thread this morning, when german “newspaper” (tabloid) “Stern”
blipped, that Angelina was interested in Petra Island as a gift to Brad for his 50s birthday.
Main feature of the island being “heart shaped”, loll.

But I could think of nobody better to bring that property fully in line with the best FLW
works.


This just popped up for only 2.4 million. Looks like a deal, other than the bastard kitchen. My guess there was a kitchen fire at sometime that never really got taken care of…

Was reminded of this thread this morning, when german “newspaper” (tabloid) “Stern”
blipped, that Angelina was interested in Petra Island as a gift to Brad for his 50s birthday.
Main feature of the island being “heart shaped”, loll.

But I could think of nobody better to bring that property fully in line with the best FLW
works.

Seller stated that it was a hoax. Island still on market. No sale to “Brangelina”.

So we all still stand a chance.

Happy Christmas or Hanukka, or what ever…