Forum where I can get feedback on my sketches?

Been looking after this, mostly because I feel slightly disappointed about the fact that there’s no such thing around, and if there is, it is semi-inactive.
Thing is, I’m interested in pulling some sort of “Daily sketches” to improve my skills, but sadly, I’m a beginner.
Not sure how wise it would be to attempt to use this thread here for practice since I doubt I’d gain a lot of interest around here so I’m curious if there is a decent place where I could get feedback even if I don’t have brilliant skills?

Why do you doubt you would get a lot of interest? try it out.

Meh, here it goes:
-a box
-a sphere
-a lame sandwich toaster attempt
-an ash tray
-a lame mint box. 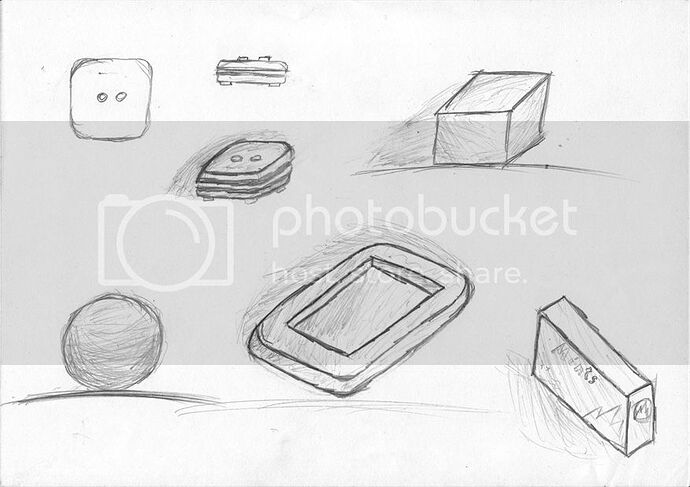 First thing you should work on, is perspective. Got access to any drawing books? If not, do some Google or YouTube searches for 2 point and 3 point perspective. Shading should come only after you get your shapes down, which might not be for a while.

You are looking at what you’re drawing, and posting it up here is the best thing you can do to start to draw correctly. More practice and you’ll be better before you know it.

While you are looking at 3-point perspective, you also need to work on line quality.

You absolutely cannot show a sketch in a professional situation where a curve is drawn by several small zig-zaggy squiggles. It needs to be one dynamic stroke! It’s not just a matter of being professional, it also has to do with readability and understanding. You, as the designer, should decide which curve is the right one. On your drawings, it’s up to however happens to be looking at it to decide which curve is right, since there are so many of them. Of course, there are situations where you want to relay a mood or feeling, but your line confidence immediately reveals at what level you are.

This is old now, but the following video had a big impact on me:

The Gnomon Workshop offers the most comprehensive set of Digital Production tutorials anywhere. The broad scope of the tutorials contained in this section range from foundational understanding of the software tools all the way to the professional...

The trick he uses is first the old one of jotting down the two end dots of the curve so he has something to aim for,and then drawing the line in between, but second, he also does “practice strokes” with the pen above the paper, sort of like a golfer does a practise swing. I found it to be really great when I started out.

Just a quick note.
Be professional about your work, because if you don’t take your sketches and yourself seriously, what makes you think we will take you seriously? Try to avoid words like “Meh, lame attempt, lame” and so on.

As frustrating as it is, the two things holding you back from getting to the next level have been pointed out:

for perspective, get yourself a good book on it. Set up practice scenarios with straight edges if you need too. Tape the paper down to your desk and plot out the vanishing points off the page… off the desk even, and just practice different view points. Someone did this exercise for me once, I should re-do it, these sketches a rough, but you get the idea:
http://www.michaelditullo.com/Design/PERSPECTIVE.html

on linework, you need to get comfortable and confident with your lines. Myself, I can only really draw four or five lines confidently, but I know what they are and I know how to manipulate the position of the pages and the scale of the line and the weight of it to get what I need. Practice standing up and making long continuous marks on the page the originate at your shoulder. Get a 36" x 24" pad and fill the entire thing up with lines. Pages of horizontal lines, angled lines. Straight lines, arcs, tight arcs. Get to know how the geometry of your arm naturally generates lines.

Now put those two things together and we can start talking about design.

@eobet: You know, that was the thing I was complaining mostly: line quality. When I said to myself that I’ll try drawing something, I then tried to draw something, and woke up that I couldn’t draw proper lines. Regarding with choosing “the right curve” does that mean that out of a multitude of lines (let’s say, 3) I should erase the rest and draw only one?.. Or what I suppose
Regarding the video, I’m not sure if I understood exactly what you meant ( I hope you meant the video sample), but I somehow got the way he was moving the marker.

@sketchroll: I sometimes get a bit too emotional, sadly.

@yo: interesting things you say about the movement of the shoulder. Didn’t think at that. Regarding the large pad, it’ll take a while to get my hands on them.

Another question: for perspective, is it a must to draw things from my mind/ from real-life objects or from images? I mean, is it wrong, or does it affect my sense of dimension?..

All of it is good, the key is just to draw.

From photos is the least helpful as the work is already done for you. you want to work on your own translation from 3D to 2D. You need to develop that mental process that can abstract and represent something into 2 dimensions. Drawing from a photo, that work is done.

Try studying an object, really studying it from every angle for about 30 minutes. Close up, at a distance. Then put it away for about 10 minutes and draw it from memory. Then try drawing it upside down (the image, not you), then try to design a competitor, iterate off of it.

If you are drawing from a photo, try ripping the photo in half, discarding one side, and taping the other to a piece of paper. Now complete the photo.

Or try drawing the opposites side of the object from the photo.

I’m just getting out of that stage where you have to do a line as a composition of a bunch of little lines myself. I was finding it hard when I knew the path I wanted the line to take, but didn’t have enough control over my hand to take that path properly.

What I ended up doing was drawing it all sketchy like you have, then taking another piece of paper and tracing the sketchy lines in one stroke (its much easier to follow a line than draw it in one stroke).
If you’re having problems with tracing, another option is to scan the sketchy drawing and do the tracing on an IPad, that way you have an undo button if you’re still not happy with it (I actually bought mine for that reason).
If you need to do it all on one piece of paper, start out really light and then do the tracing lines with a dark pen or a sharpie.
I use a combination of the two right now, finding the lines I want with the sharpie, then taking it onto the IPad for final lines and shading.

It might be cheating a bit for now, but I’ve found that when I need to quickly draw in front of people for communication now, I’m more confident starting with the nice single lines and not needing to start sketchy because I’m building up the practice.

Some pics for reference (obviously still working on perspective as well): 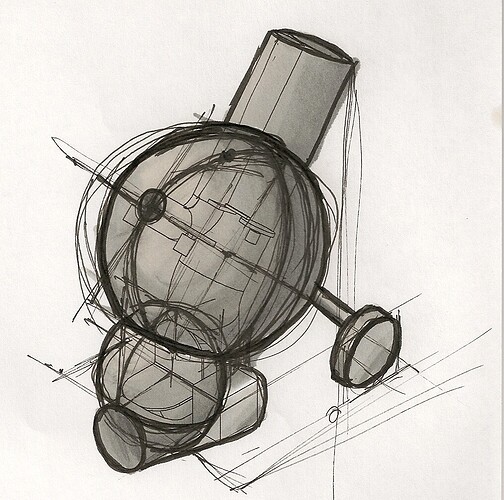 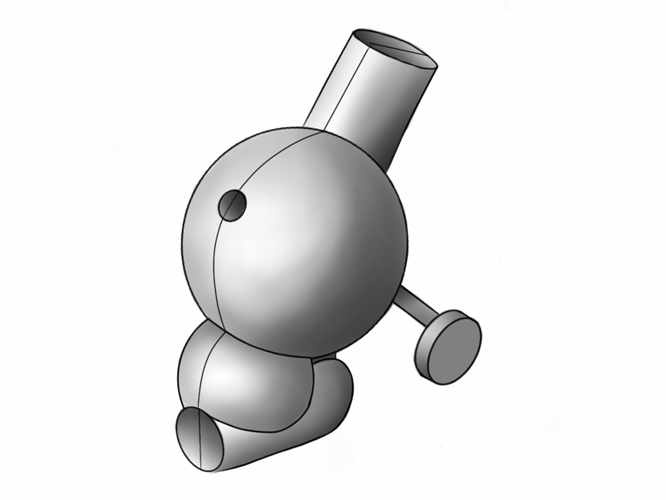 If you are drawing from a photo, try ripping the photo in half, discarding one side, and taping the other to a piece of paper. Now complete the photo.

Or try drawing the opposites side of the object from the photo.

Cool idea! That would be a great drawing class exercise.

When I started drawing, I had the same problem with short sketchy sections. The one piece of information that clicked and made me ‘get it’ was to draw from the elbow. My instructor made me keep a stiff wrist and have all movements come from my elbow. That forced me into longer, more confident strokes. Start with simple shapes (cell phone, remote control, etc) that will allow you to gain confidence and line consistency. From there you can move onto come complex shapes and details.