This thing confuses me a little. So Ford is building an electric SUV crossover, built on the Mustang platform called the Mach E. 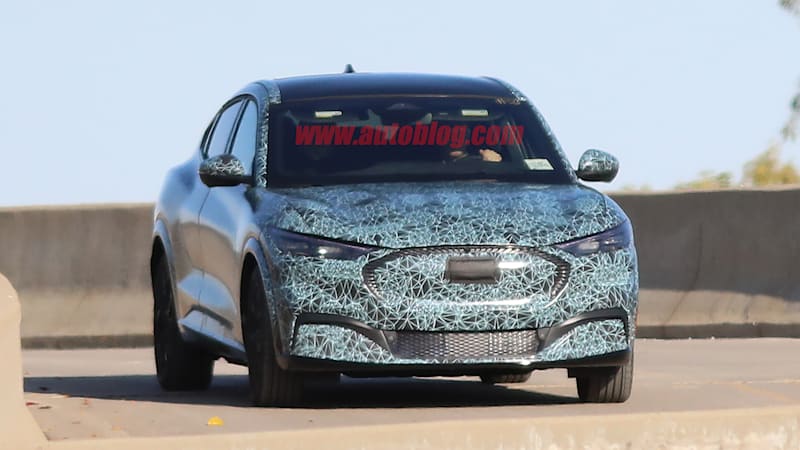 Ford has named its upcoming electric crossover the Mustang Mach-E. The EV will get its official unveiling Sunday night ahead of the 2019 L.A. Auto Show. 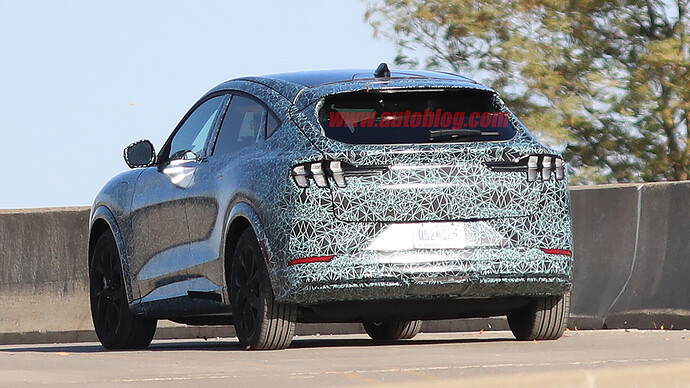 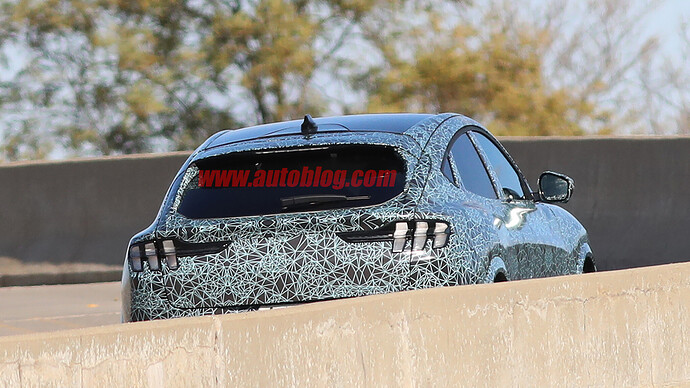 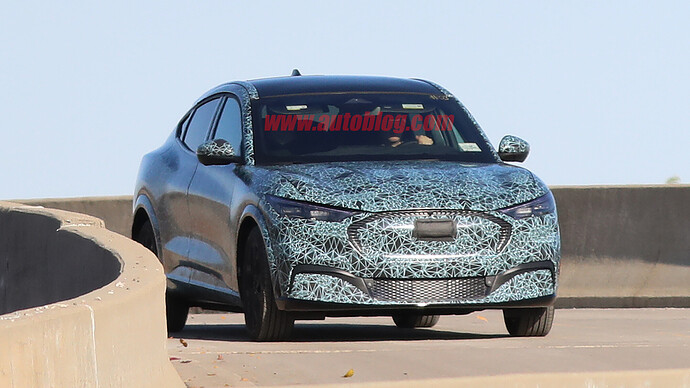 My understanding is that it isn’t built on the mustang platform. Just a jerk in marketing thought it was a good idea to capitalize on the brand.

ah, I’m not sure why I thought it was actually on the Mustang platform. I wonder why they just din’t bring the Bronco back as an electric. I heard it is essentially going to be a rebody of the Raptor.

I can just hear the meetings around this thing. “Make a Tesla 3, but make it like a mustang…but make it a hatch so we can sell in Europe…but make the rear doors invisible so sportscar fans will want it…but make it a crossover because we need to compete with Mitsubishi in the “I don’t care what I drive”-market…but…” etc. for 120 hours.

I get it from the perspective of Ford no longer making cars in the US aside from the Mustang, so the Mustang sub-brand is kinda all they have for anything that’s not an SUV, truck, or van. But…man…this seems completely wrong-headed when paired with that design. Not only does the car itself barely resemble a Mustang (the tail lights, I guess), but I gotta believe it has to potential to really hurt the goodwill they’ve built in the Mustang sub-brand since the really effective redesign in 2005.

A true e-Mustang could be a disruptive product, the first mass-market electric muscle car, just as an e-Bronco could upend the rugged SUV market. But this? A bland hatchback shoehorned into the Mustang sub-brand? I just don’t see it.

Remember Lee Iacocca’s Mustang II? It’s been 45 years since Ford tried to capitalize on the Mustang brand to take it in a different direction, and the same arguments are there both for and against.

Personally, it looks like they’re trying to beat Tesla to the Model Y. The smaller, more affordable (maybe?) Model X. Branding it Mustang is baffling. Branding it as totally new Fusion, or Escape, or Explorer would make much more sense. I imagine people will buy it, and get excited about it. Mustang purists will revolt and spit on it, suburban families with 1 or 2 kids will flock to it.

But can you imagine if they’d made it a Mach-E Explorer instead? There’d be lines out the dealership doors right now…

Maybe it should be a Lincoln or Mercury or some other brand than Ford? It seems like the thinking was, “no one will pay us a premium for anything we make, other than the Mustang. Therefore, we’ll make it a Mustang.”

crazy idea- maybe it’s a strategy decision for future vehicles. It could be that they’re deepening the mustang promise as a performant family vehicle to leave room for a more concentrated performance EV (maybe a revival of the cobra or something) somewhere in the realm of an electrified corvette/ Tesla Roadster. The mustang has always sat in a weird generalized place between sports car and family car that could be taking sales away from a potential true performance car. Maybe they’re making the Mustang live closer to the family car side of things, so they can make something that’s competitive in the 2 seater category? They could be trying to get their lineup to look like Tesla’s.

or maybe I’m just wishfully thinking that we’ll get a cobra revival and Ford is now committed to selling lame appliances with 4 wheels for eternity.

remember the Corvette concept family from 1954? 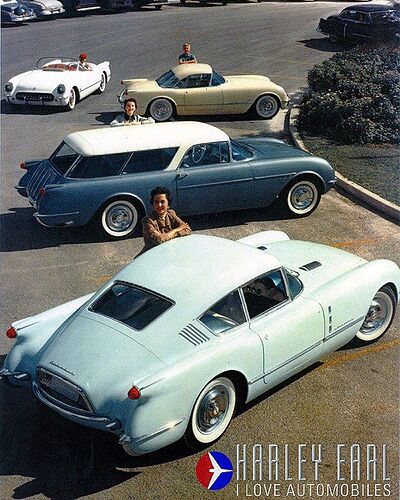 Maybe it should be a Lincoln or Mercury or some other brand than Ford? It seems like the thinking was, “no one will pay us a premium for anything we make, other than the Mustang. Therefore, we’ll make it a Mustang.”

remember the Corvette concept family from 1954?

the wagon was awesome as was the GT fastback!

some images and specs floating about: 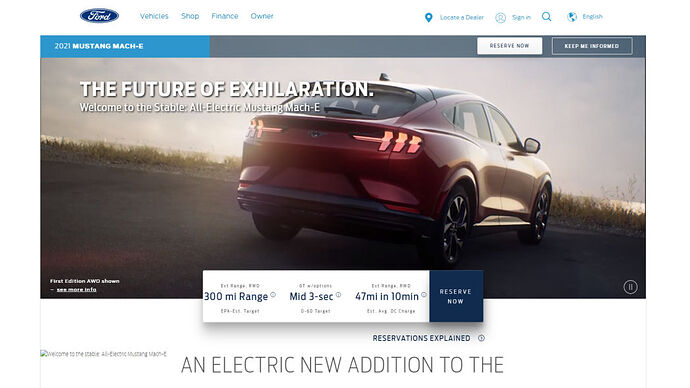 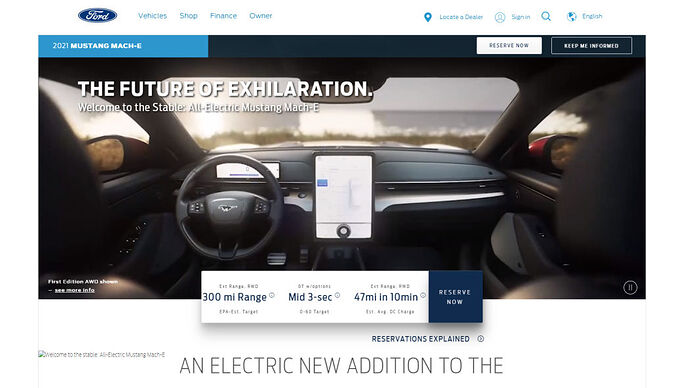 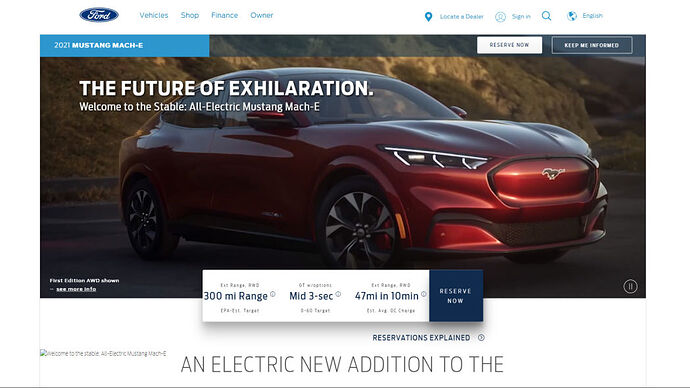 I agree. It it was called Escape I think people would be pumped about it. One of my classmates was on the design team. He worked on the first curvy Sonata, Genesis Coupe, and the Chrysler Crossfire. You can see his kind of full forms.

I’m not sure if this was the strategy but it seems like they are trying to beat the Tesla Model Y to market. This has similar specs, will be cheaper, and is arguably better looking. I’m just curious how the Mustang thing will play out.

Side note, I’m not sure why electric cars need their own branding, as Richard pointed out in the other thread. I for BMW, ID for VW, etc. VS just having the option, like the Kia Niro. There is an ICE version, a hybrid, and an EV version. They all look the same and there is no brand switch.

They did a much nicer job on the “grille” than Tesla has.

I actually think it’s a reasonable good looking car. Completely agree on the confusing Mustang branding though, it will be interesting to see how it fairs with production outside of the USA.

Side note, I’m not sure why electric cars need their own branding, as Richard pointed out in the other thread. I for BMW, ID for VW, etc. VS just having the option, like the Kia Niro. There is an ICE version, a hybrid, and an EV version. They all look the same and there is no brand switch.

I also agree that the branding has no need to be different, but think it will continue until the marketing benefits around development, i.e. we are innovative and forward thinking, wears off for consumers. I thought this would have happened already given that virtually every car maker has some level of EV in the works.

Official photos have been coming out. 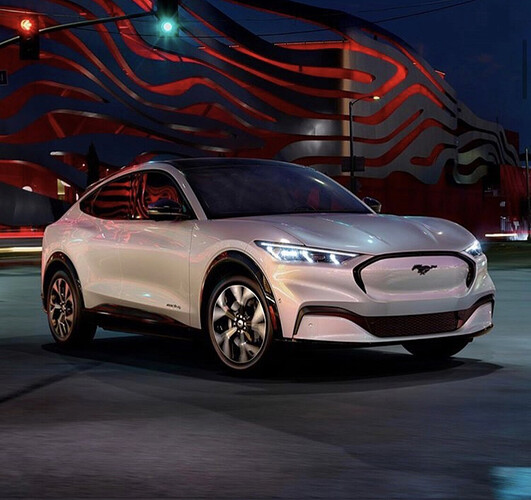 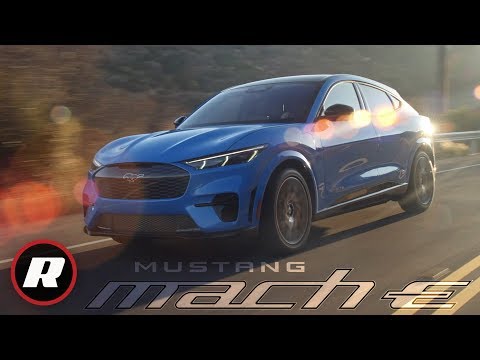 Ford has good designers, this isn’t bad. Like Yo said, when I think of it as a Ford, it’s (probably) a hit. They are out Teslaing Tesla. As a Mustang, I’m confused.

The good: I like that they experimented having a manual control inside the touchscreen (notice the physical knob).

The bad: those screens are giant and would give me a headache after driving for 5 minutes. 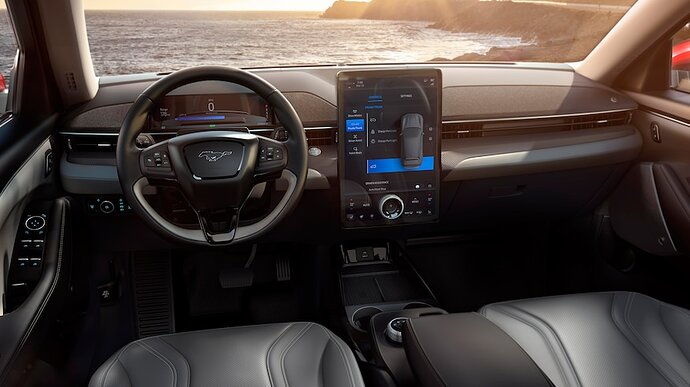 Last thought: the tech is driving the form factor right now. Batteries need to be low to keep COG low. Once the floor is packed with batteries, the cab has to be moved up 8" and that will give any car a more cross-over like shape. The only alternative is building smaller batteries, like the Honda Urban EV thing or building a longer car (Model S).