For a good cause, the fifth and final chapter

These are my fifth and final entry into our charity auction of birdhouses. They will not be having the auction moving forward. I don’t know what these will bring but the previous 4 brought in about $1,100. Not too shabby.

These are solid aspen, cherry and walnut, miter joints. Tung oil and wax finish. Aluminum roof and opening. Roof is attached by magnets. 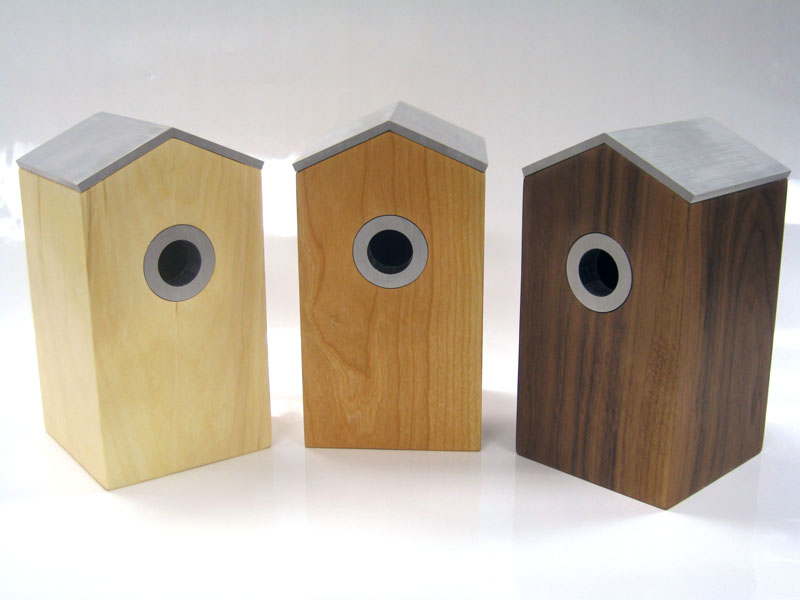 I have no place to put them, no other birdhouses, and no particular affinity for bird-level architecture but my first thought is that I want them.

The removable roof feature is pretty slick too.

These might beat out your 2010 ones for my favorite, the walnut version is especially nice.

Nice, I like seeing your yearly entry to this! Bummer they are stopping it. Each year your entry is different from the previous.

Quite a departure from the previous entries! Really love the design. I’m with Matt, these may be my favorites after 2010.

I love the simplicity of these. I know it sounds odd, but I kind of just want to use them as art pieces in my house…I have a massive plain wall that I could see hanging these and painting on a very graphic tree to the wall to give it some context. Unfortunately, I can not afford these, but great work and craftsmanship! The miter joints look nice and crisp.

Quite a departure from the previous entries! Really love the design. I’m with Matt, these may be my favorites after 2010.

From the previous entries, I got a lot of “Those don’t look like birdhouses.”

So much for trying to open some eyes.

This year I acquiesced. Made “traditional” birdhouses.

I love the 2013 one the most. Such a great contrast between the machined parts and the natural parts.

I see inspiration for a speaker with the 2010 one, though I could never get away with that much material waste from cutting the plies that way.

I like how this years is such a ‘perfect’ traditional birdhouse that it goes out the other side and becomes unique again. Even though you adjusted to the feedback, you still twisted it a little…

I think this would be a cool core77 competition. I’d love to make something here. Maybe we could organize for a core77 design school scholarship or something?