Hey guys, I know things close to this have been covered before, but my situation is a little different, so I figured I’d start my own conversation instead of resurrecting a thread.

Context:
-my old intuos2 died a few months ago leaving me stranded for a tablet at home, I’m currently borrowing a intuos4 which isn’t bad, but it’s the small size, which is bad.
-I have an ailing desktop (it’s only a core2 quadcore with a 1gig video card)
-I use a cintiq dtk-21ux at work, an it’s finally given me the confidence to sketch digitally, so I’d like as close to that experience as I can.

Goals of new computer/tablet:
-most important, pressure sensitivity/no lag in photoshop
-portability (I would love to be able to just as easily use this in a coffee shop or a couch as I can at a desk)
-basic modeling/rendering capability (I’m used to rendering on a pretty slow setup, but if I can swing it I’d like a core i7)

Now I know there are a few different options out there and I’m willing to explore them, but I’d like to get started on redoing some sketches for my portfolio sooner rather than later, hence calling in the help!

Current Ideas:
-wait and wait and wait and hope to find a cintiq companion 256gig on ebay for my budget (most go for 1500+)
-surface pro 3? (haven’t had a lot of time to think on this, and I’ve read good/bad things about the new pen tech)
-large intuos4/5 for mobile sketching and an older 21ux (dtz-21oo) for home
-yiynova tablet for home and Ipad/adobe pen for mobile?
-yiynova tablet for home and Samsung note 12.2 for mobile?
-some sort of windows tablet pc? (any hints to a good one would help, or to how they stack up vs the other options)
-motion computing tablet? (this is one I know the least about)

Thanks again for all your help!

Current Ideas:
-wait and wait and wait and hope to find a cintiq companion 256gig on ebay for my budget (most go for 1500+)
I heard the companions are having charging issues where it no longer charges after a few months of use. Maybe wait for version 2 before spending your hard earned money on one.
-surface pro 3? (haven’t had a lot of time to think on this, and I’ve read good/bad things about the new pen tech)
I heard Penny Arcade’s Gabe is working closely with Microsoft Surface team to come up with a driver that works for artists. Additionally Adobe and Ntrig just updated their CC programs and pen drivers for multitouch gestures and increased pen pressure sensitivity compatibility across various programs.
-large intuos4/5 for mobile sketching and an older 21ux (dtz-21oo) for home
Wouldn’t this eat up all the money for you to get a new computer?
-yiynova tablet for home and Ipad/adobe pen for mobile?
I’ve used an iPad and galaxy note tables for drawing. It works but I always find myself going back to desktop applications. It works but it severely slows down my process. I wouldn’t recommend doing the iPad/pen combo. Instead use that money on a computer.
-yiynova tablet for home and Samsung note 12.2 for mobile?
Same concerns as above, but the note 12.2 is great for sketching. The screen is large and feels good when sketching. Good pressure sensitivity across all the note devices. Invest in a Bamboo feel pen if you get the Note 12.2.
-some sort of windows tablet pc? (any hints to a good one would help, or to how they stack up vs the other options)
Lots of people on tabletpcreview forums rave about the T902. In fact you should take a look at that forum.
-motion computing tablet? (this is one I know the least about)
Don’t know much about them, go to the forum mentioned above for more information.

Surface Pro sounds like it would work well for you. It’s got the horsepower and most people who’ve reviewed it and used it for drawing have said it is pretty damn good, even if it doesn’t meet the Wacom snobbery some of us are used to.

IMO the ability to draw on the screen always outweighs the subtle details of line weight and parallax, which most of your non-artist clients won’t care about.

I just got my Surface Pro 3 in the mail this week, and I would highly recommend it for any designer looking to replace a wacom tablet. Sketchbook pro works great and you can run several 3d packages as well if you want to do underlays from a CAD model. For $1200 you can get the midrange model with 128GB SSD and core i5 along with a keyboard cover and probably an Arc mouse as well (which is a very neat portable mouse that folds flat). I think it has a core i7 model in the higher end model. I’ve basically replaced my old macbook pro with the surface, it’s a lot more affordable and portable than many other options out there.

@Jakebot,
Can you post some sketches here using your SP3 in both photoshop CC and sketchbook pro?

Thanks for all the advice so far!

@Sketchroll, you’re absolutely right, some of those options don’t fill my need to replace my computer and some of them don’t fill my need for portability, part of me thinks there might be no magic bullet on this one. The lenovo looks interesting, but the price is high to the point that I could swing a companion (and thus a little out of my reach). The good news is thanks to your insight on the companion, I don’t feel so bad about potentially not going with it.

@Mike and Jake, I’ll definitely have to check out a sp3 this week, those specs and prices are pretty good, and if sketching on them is plausible, it might be the best solution I’ve found.

@Jake, I also second the sketch request, I’m very curious to see the level of sketching coming out of the sp3!

Now I just need rareblacksheep and Scott to weigh in!

Side note: the intuos pen for the ipad is supposed to be capable of the 2048 levels of pressure sensitivity, has anyone heard of any third party pens for n-trig products that can increase the sensitivity?

I did some doodling over lunch earlier today, this was done in sketchbook express. I’m still working on getting all my full programs reinstalled. 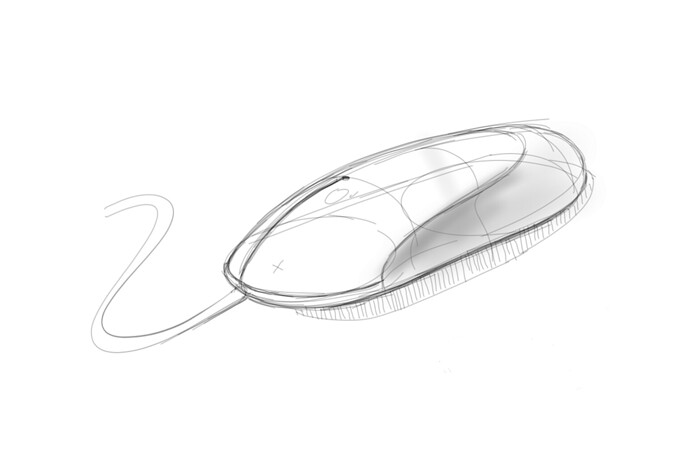 Is this with the wintab drivers installed?

I think this was just before I installed the wintab driver. I’ll do another sketch today and report back

Here’s another sketch in sketchbook express with the wintab drivers installed and some other updates. I don’t see any big differences so far, but I’ll give sketchbook pro and PS cc a shot and see how it looks.

You can’t tell from the photos, but the pen actually has a nice bit of drag to it. Its more like drawing with pencil rather than drawing on glass. The pressure sensitivity is kind of nice too, it’s easy to control the line weight and keep it fairly consistent.

One odd thing I’m noticing so far is when drawing lots of small lines right next to each other, they end up a bit squiggly and inconsistent. If you look at some of the shaded areas you’ll see what I mean. I’m hoping they can fix that with a firmware update. 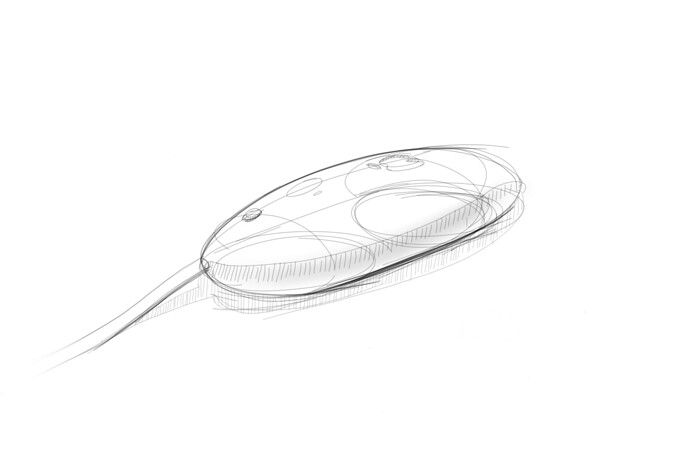 Just wanted to check back with you guys after installing all my programs. It looks like I dont have as many issues with sketchbook pro as I did with sketchbook express. I read up a bit about the tablet drivers, and it looks like SB pro makes better use of the WinTab driver while SB express uses a built-in driver. Photoshop CC appears to work well too, check out the test sketch below: 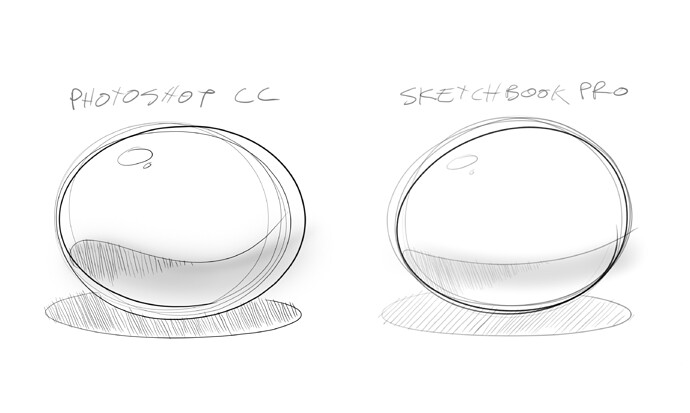 I am in touch with N-trig to see if there’s a way to fix the distortion issue when drawing small lines for shading or grass. I’ll let you guys know what they say.

Just wanted to check back with you guys after installing all my programs. It looks like I dont have as many issues with sketchbook pro as I did with sketchbook express. I read up a bit about the tablet drivers, and it looks like SB pro makes better use of the WinTab driver while SB express uses a built-in driver. Photoshop CC appears to work well too, check out the test sketch below:

Woah! That’s looking great! I played with a few at Best Buy today, but it was hard to get a read on the pressure sensitivity in their “drawing” app (freshpaint or something). This is looking like a more and more realistic option!

Also thanks for coming back to the thread and giving an update, it’s much appreciated.

Yeah, I tried out freshpaint when I first got it out of the box and it was terrible. The pressure sensitivity forced you to really jam on the screen to get anything to show up. They should really just preload sketchbook express on the surface if they want to sell people on its drawing capabilities.

I’m looking at the Surface Pro 3, it’s beautiful… but I’m really doubting whether 12" is enough to do CAD work on.
I’d want it with the i7 (a decent dual core processor). But, I’d have to wait until the end of August here in Europe and it’s going to cost me almost 1.600 Euros. For that money I have quite a beast of a laptop and I’m thinking for sketching I’ll either try to get my old Cintiq to work again or buy a ‘new’ used one.

What kind of software are you using? I could see how well it works on the SP 3. In my opinion though, I would leave most of the hardcore CAD work to a full size desktop PC. I see a laptop or tablet as being for work I really need to do while I’m on the go, like taking notes or doing some sketching, browsing the web.

I just got a response from N-trig about the distortion issue when doing hatch shading:

I am very sorry for replying so late to your inquiry.

We have received several complaints about this phenomenon and we are currently taking it with our development team to see how can this be improved.

I just got Solidworks 2014 running on the Surface Pro 3, working pretty well so far 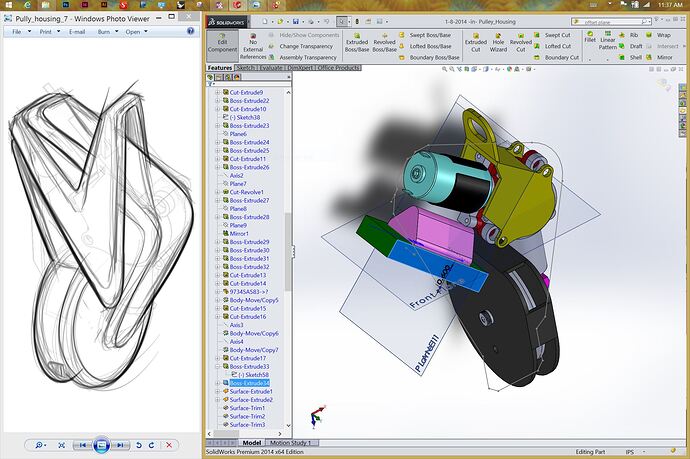 Would be interested to see if this machine will be useful for me.

I’d love something that I could use on the couch at night to do some room layouts etc for my renders and bring solidworks models into modo and also sketch on.

Just a bit worried about buying something and then realising it doesn’t have enough juice. My work pc is a 64bit windows machine, 64gb of ram and an i7 4990.

Don’t want to do insane renders at home… Just some rooms with products in them, but love the idea of the surface pro. Would be keen to see how it handles modo and solidworks.