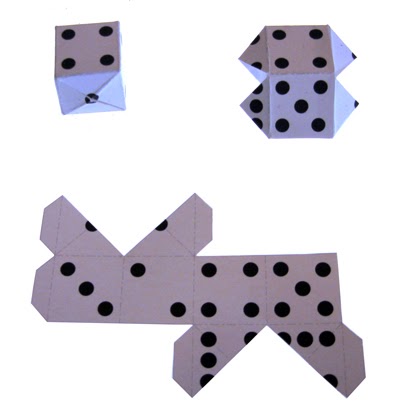 This is the foldable dice I made for Fruzil garden game. Its very easy to fold and to glue too. The dice got one way to fold it flat and eve...

I made this simple foldable dice. It is a quite simple concept. I was making a concept packaging for a boardgame and i though if everything in it could be flat I would save allot of space. That is why I designed this foldable dice. Also if you want place with dices allot could be easier to carry around then normal dices.

doesnt look very evenly balanced (cant see how it could be with the overlaps in construction). it rolled “2” 6 times out of 12 that i could see in the video.

nice concept, but maybe would need to adjust to get a better balance.

Somehow everyone think they are smart how a cheat dice work cause one side is heavier. But cheat dice got a metal weight inside it to go to one side that is a more heavier than a thin piece paper.

And a normal dice is always off balance cause the dots are all ditches making the side with 1 dot the heaviest. But this won’t make you throw a 6 that much easier.

It always luck one which side it lands and rolls. Vid shows it rolls good like a normal dice. And I could only count it rolled 5 times. But if it would roll allot on 2 because 5 would be heaviest side why would it turn onto 5 then? Cause then it would be impossible to throw a 5 because it is the heaviest side.

It is impossible to throw different sides allot of time it all depends on luck. There is no way to throw a dice perfect with 16.66% on each side. It always bound to go to one side less or other more. It all about luck.

Just rolled allot same time that moment but you should make one your self and test which side it turns. Also have a update one the dice. I made a plastic version.

Balance or not… it does seem weird that when you rolled it only one time did it ever land on a side with a one or six on it… I agree cool concept… it would be neat to have one but I wouldn’t rely on em.

a) Spinner with 6 segments
b) Flip 6 coins. Heads up counts as a point
c) These cool “polyhedrons” which you can put 1-6 on twice. A rubber-band hidden inside makes it pop into shape. Best of all, you can find manufacturers of these…They’re usually sold as 12-month calenders.

Nice idea, perhaps you can design it so that it folds on the edges?