Okay, I’ll have to wait to get my hands on one of these to see if it really works, but it sounds damn cool. Here’s a link to the tricked out flash site:

FlyPentop.com is for sale | HugeDomains

This domain is for sale! Fast and easy shopping. Trusted and secure since 2005. 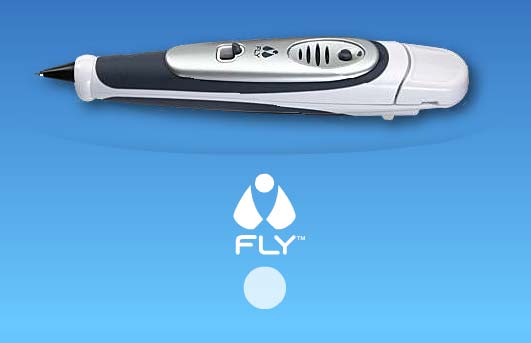 Here’s a description from Playthings.com:

“The new FLY Pentop Computer platform, LeapFrog, Emeryville, Calif., brings pen and paper to computer. The electronic device gives users real-time audio feedback as they write and draw on special FLY paper. Users can draw a calculator, touch the handwritten digits and functions to perform an operation â€“ then hear the answer announced from the FLY Pentop Computer. With the FLY Through Spanish software, a user can write a word in English, touch the handwritten word, and then hear the word translated into Spanish as it is spelled out and then pronounced. The suggested retail price for the FLY is $99. Accessories range in price from $24.99 to $34.99.”

Target has a ton of shelf space devoted to this. Will be interesting to see how this performs. Seems to be targeting an older age range, which can be a very fickle bunch.

I think I read about something similar to this in wirred magazine about 5-10 years ago. I’ll have to check it out but the design firm was somewhere in the netherlands I think. Same idea, special gridded paper with the pen being able to recogognize handwriting and stuff.

Dunno about the pen itself but that site…

I have one. It’s awesome!
Really, though, it does everything it promises and more. It’s very fun and technologically impressive, and also gets you a lot of “oohs” and “ahhs” when you pull it out at a restaurant.

anyone just get the urge to punch justin?

OK, looks cool, but can you “sketch” and then download the drawings to your computer at a later date???