Not an ID student, but hoping to be next fall so I’m trying to incorporate some ID into my fine arts portfolio, I’m looking to the core for help with that.

Just starting to draw shoes, i skateboard, so here is a skateboard shoe idea. Before i go full speed ahead with it I’d like to get some feed back on the proportions, overall shape, will it go on a foot, etc. this is the basic silhouette I’d like to use, it was butchered from a Nike Dunk i put on my desk. feedback appreciated! 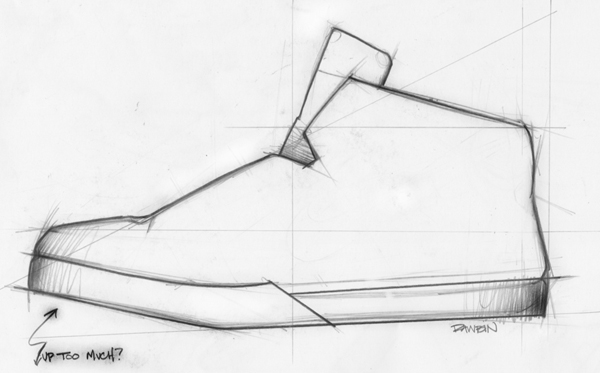 I don’t think there is too much too spring (though it is pushing it for a skate shoe) but what you need to work on is the transition from the flat bottom to the tip of the toe. Soften it, make it more friendly… you want to put your foot in there! Check out this pic of the Converse Pro Star… nice transition, good heel rake, nice instep. 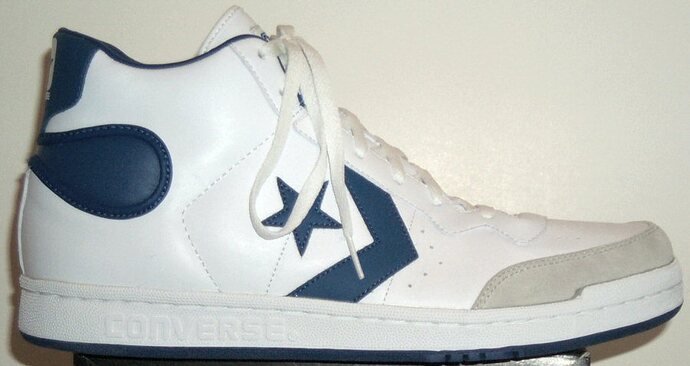 I wouldnt worry too much about drawing your shoe freehand. Michael Ditullo has some nice footwear proportions on his website michaelditullo.com.

Just trace over those for a while. Tweak some things where you find necessary. For example, a lightweight basketball shoe will have a slimmer silhouette than that of a shoe designed for a big old bruiser.

The more you trace proportions, the more your doodles will be on point.

Good first try, but I would do LOTS AND LOTS. I will be graduation from ID in the summer, and I still mess up proportions.

thanks, it is a bit beefy looking for a skate shoe, i’ll try to kill that along the way. and yes the toe def did not not look right to me.

what’s the “heel rake.” And are street-ware type high tops usually drawn laced up like the converse pic, or is it common to sketch the tongue popped?

I think it is fine if you want to draw the tongue popped… as long as it better communicates the design and does not detract from it.

i am probably in the minority here, i would not stress over proportions, just keep sketching; EVERYONE struggles with it, so far as, your skate shoe looks (is proportioned) like a skate shoe, your good…tangentially you might ask yourself why skate is proportioned the way it is and could it be done differently?

Well here are some spins off the first post
the bottom right one has a weird area where the upper meets the outsole.
i made a sad attempt at laces on one of these, but i’m going ignore them for a while.

if any of my problems carry any posibility that i’m sketching too small or too large, the two posts on here were both 11 X 14 pages, i don’t know if this is common, i feel alright though

yo, to help keep the toe off the ground, but not too much, i put a little ball on horizontal plane, i think this helped… 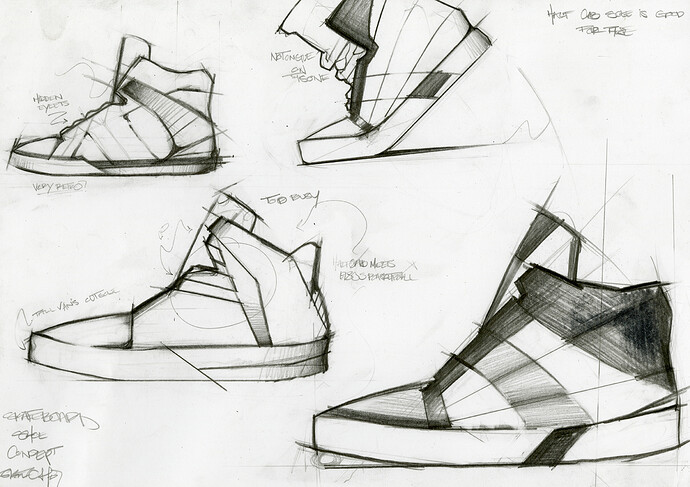 Good second step! Sketch style is pretty good that will come with time.

Proportionally, what is hurting the most is the vamp/toe box the vamp is the piece of material on top of the toe, the toe box refers to the stand up of the shoe, check out the quick red line below. Also the heel rake makes it look like it is leaning back a bit… not too much, but be aware of it.

Also, try lining up some of the forms in the midsole/outsole with the lines in the upper. 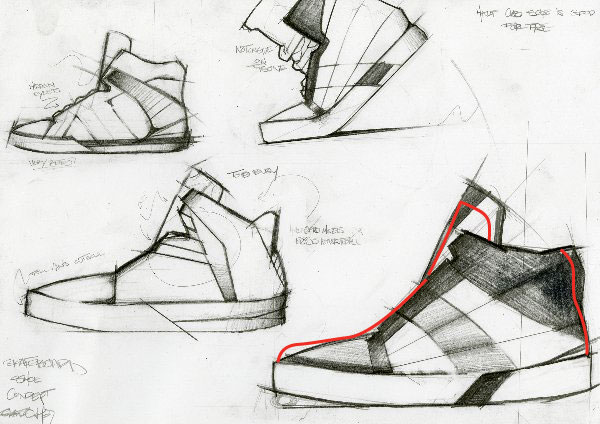 I’m an advocate of tracing over shoe photo or templates, as David suggested. One caution, however… don’t draw your lines in a slow, deliberate way. Use light, quick, loose, sketchy lines, and remove the original image immediately. Breaking away from the original trace image will let your own creativity start flowing sooner. It’s easy to let a template become a creativity block.

http://www.holabirdsports.com is a good place to get images to use as templates. They may not carry the latest styles, but they shoot their product photos from perfect angles, not skewed, like Zappos. They don’t carry skate shoes though.

Mike, every time I see a Pro Star, my mind immediately conjurs an image of Magic Johnson throwing a lookaway. It’s a sweet picture.

thanks for comments/suggestions guys.

traveler/ryan - i looked at your website, cool stuff and congrats on the accomplishments! i’ll try tracing, i’ve never really done art by tracing but then again i’ve never tried doing shoes…i def understand about not getting to scratchy, i usually draw fast and keep my arm moving (at the shoulder) constantly. with these drawings i went back and cleaned em up with a 6B pencil afterwards.

yo, thanks-i’ll see what i can do with those lines!