Was incredibly hard to balance esthetics and function. Easy to do either separately.

Which I think accurately sums up what we do, and what design is.

I like it, what does everyone else think? Anyone know who was involved?

It’s when I see things like this that I realise that the difference between those with vast technical knowledge who work in the background and those who make the most money/social impact and gain celebrity status with their endeavours is understanding the importance of good aesthetic design.

Aside from looks, for a functional spacesuit it’s amazing. It looks so flexible and thin which will be a game changer I’m sure. I like the center chest detail, I think a “Commander XYZ” metal name plate could fit perfectly in there.

Bragging a little here, but can’t help it. I saw a few prototypes when I was up there for meetings about a year and a half ago. I was able to get a tour of Space X from someone pretty high up the chain. At the end of the tour he asked if there was untying else I wanted to see, to which I replied “Yes, I’d like to see the space suits” … at first he gave me an official line “as you know we don’t do manned missions, yada yada”, to which I said everyone know you guys are going to, you said so yourselves, there must be prototype suits… he paused and said “ok lets go to the suit lab”… I couldn’t believe it and I loved that they would do something like that. I could tell they were excited and proud to show them off. The suit is unbelievably close fitting compared to current suits. If you have ever seen any of the current suits in museums they are very bulky and hard to move in. I’m assuming there is a lot of material science going on in these. Also, on an aesthetic side, the detailing on the helmet is really nice. Some nice surface changes and they feel like a designer was involved.

thought we should get a pic in here. 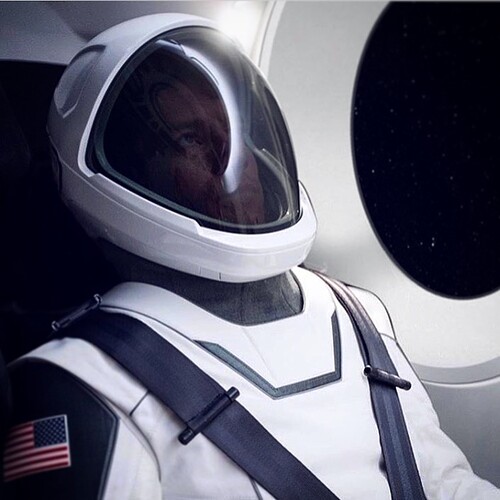 The suit is unbelievably close fitting compared to current suits.

Well they are not THAT much bigger, are they? Remember, this shouldn’t be compared to the huge spacewalking suits, this is “just” the suits they wear while sitting in the rocket. Even the current ones are pretty tightly fitting. I feel the size benefits are a bit overemphasized.

They are certainly much nicer and the detailing is very science fictiony, I really like it, especially when you compare it to the current ones that are clearly made by engineers (which I fundamentally can’t really blame them for because how many of these suits do they actually produce? A few dozens at best?).
Good for them to realize that the cost of the few designers they need for this suit hugely outweighs the benefit of having super cool looking space X astronauts in all their press material! I wish more engineering focused companies would approach their vision a little bit more like that.

I met one of the NASA suit engineers at this year’s STRUKTUR conference… about as far as they get is slapping some color on and even when they do that they don’t take it seriously.

Who did the industrial design for the suits? Was Daniel Simon involved? Do astronauts (ahem) customers get to keep the suits as part of the deal?