I’ve been pretty excited to share this project with you after getting such good feedback on my small desktop monitor stand project (first project with welding...).

For those of you who don’t know, I’ve just started my career in design and I’m ridiculously excited about it. I can’t wait for my next project, I wonder what it’s going to be?

As it is, I’ve been extremely busy with this project. Certainly put in some long nights! As fun as it was, I’m happy to be done with it. It was a great first project and a great addition to my (relatively) tiny portfolio.

The client told me he wanted a display for his skateshop and that he wanted to incorporate black chain-link fence somehow. I wish I had better documented my initial concept sketches, but this was before I realized the importance of a clear and well-documented initial design phase. I won’t make that mistake again, but I apologize for the lack of sketches here.

Regardless, I certainly documented the building process which I hope you enjoy! Check it out! (I hope you like scrolling down…)

Any feedback is greatly appreciated. I definitely learned a lot and there are some things I would have done differently.

Some of the lessons I’ve learned:

I’ve learned more lessons than that, but this isn’t a thread about lessons. Without further adou… here is the project I’ve just about finished. My first. Enjoy! 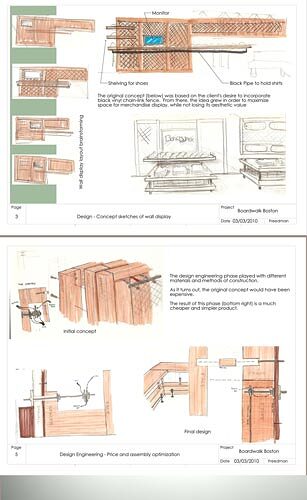 Come on man, break those pics out so we can see them. Even when I zoom in they are tiny.

I left a few images out.

Looks great!! I would love to see some of the background work. Did you have any sketches or process work to show us?

My criticisms: Did you have anything to do with specifying the hangar selection? Honestly stock clear plastic hangers just read discount store to me. Wood, or black would have been a better choice. That and there are entirely too many shirts on that wall. It would be difficult to find what you’re after. I understand that a shop like that wants merch on the floor (afterall, it doesn’t sell if you can’t see it) but perhaps being more selective with the choices, they could have a cleaner display. Change out the shirts weekly or something.

Chris- I liked your input. I actually talked to the client after I was finished and told him about your suggestions. He didn’t care about the clothes hangers at all, though. Not even a little bit, haha. He probably would have been just as happy with the free ones from the dry cleaner.

As far as the amount of shirts on the wall… he’s had those shirts for a while and just wants them sold. He did say that once they sell hes not going to replace a lot of them, so as to leave more free space. So that may be a battle won, but who knows.

I’m sorry I don’t have more conceptual drawings to show off. I certainly won’t make that mistake again. As soon as I came across an idea that ‘worked’ for me and the client, I went right into CAD with it. I guess it’s one way to go about the design process, but not one I intend to use in the future.

Drawing for longer lets me keep the idea loose and I like that. Also, I really need to keep working on my sketching skills. So any excuse to draw is a good one.

Here is the final, final product. 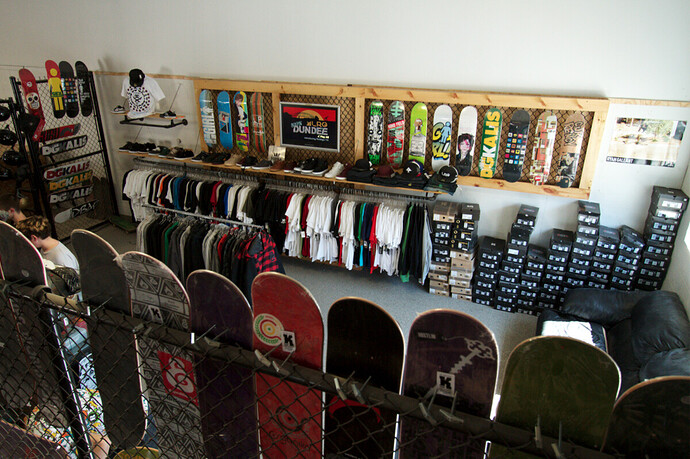 Are the board hangars on the fence in the near part of the image stable like that? Some of them look like they’ll just fall down when you check out a neighboring board. I don’t know how they work, but you could drill through the pipe and put the pegs through or weld them to the fence top.

Also, those shoeboxes are just begging to be put into some wooden crates. I know the job is done but it’d tidy up the pile and help out the warehouse/industrial feel

maybe even milk crates, but I think those are not an ideal size.

Good observation. The way the boards in the foreground are hung wasn’t my idea, though. They aren’t very sturdy or easy to use, either… but it’s what the client used before I came around and he seems to be alright with it.

For my design (and what ended up on the display) I chose to go with threaded inserts into plywood. Then I just used some threaded rod and a nut as a stopper for the board.

As for the wood crates, I agree! They might hire me to do their checkout counter so maybe I’ll be back there sometime.

For now though, I’m excited that I get to work on new projects. I just bought a table saw so my mind is racing with possibilities.

Thanks for the input and the kind words!