I have never worked with softgoods. I recently had the itch to tinker around. Could you have a look at this sketch and give me some guidance? is there any way to die cut the center out of cloth or leather and then sew in a window of a different material while keeping a clean edge on the die cut part?

Especially if your corners ave rounded?

I can’t get the center window not to bunch or look wonky or frayed. 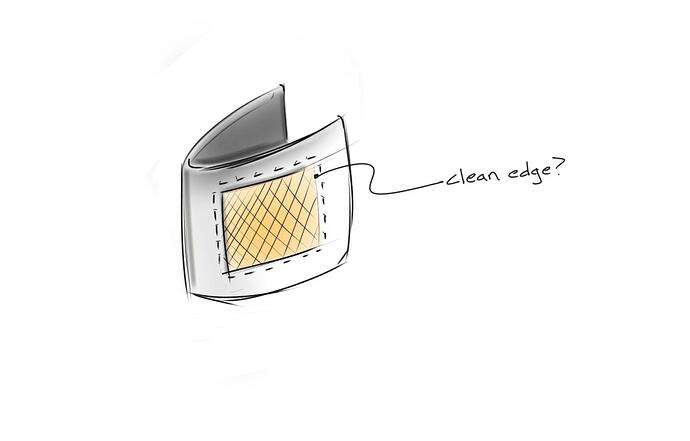 IP: Judging by this folded edge treatment on the medial side of the XX1, I believe the answer is yes. Thouh I have to admit, I am not quite sure how it’s done in a complete circle like this. Not sure if that answers your question or not.

Check out the ID window on your wallet. Might be some inspiration there.

You can do a turned edge as Tony suggests as well, but the corners will most likely need to be about a 5mm radius to be able to turn it and you are essentially doubling the material thickness in that area and stiffening it, those might be positives or negatives, but something to consider. Typically you will need an spot where the turn stops which you can cover with a thin webbing or something, on the AJ XX1 Tony shows above it was meticulously skived and glued to be barely visible, expensive additional labor.

Are you mocking some stuff up yourself?

Are you mocking some stuff up yourself?

I was so thoroughly disgusted with the Dosh Wallet I got recently that I have been looking at the idea of sewing up my own. One of the concepts has an ID window type of treatment that I roughly sketched for this discussion.

I have just been playing with some old cloth around the house…cutting a window and folding it. I never thought of trying to glue it. I will give that a go.

Such a rookie with this stuff

A little contact cement goes a long way my friend.

I saw a cool idea in a wallet once were the id window was mono-filament mesh, it was cool and it worked well.

As Richard says, if its leather it has to be skived first, then it’s much easier to work with. You then fold the edges and glue them. Then hammer the folded edges completely flat with a folding hammer. Finally stitch it. Yes, the ciricular ‘hole’ on the shoe can be done this way, but you’d need top make small cuts in the folded underlay to make this possible. As long as there is some stretch in the material and it’s not too thick, it’s doable.

Oh and latex based glue is the glue we always used in shoemaking class when I was a student - that’s latex glue for folded edges whether it was leather or textile and neoprene cement for everything else. We did design some softgoods. I’ll have to dig out what I made - I don’t have it all here on the boat.

As I said…zero experience with working in cloth/leather goods. The term “skived” was foreign to me. So I looked it up.

I am assuming you mean skiving as in “thining” the leather:

Image above was found at this site:

Actually, an interesting find for anyone doing model making.

yes, but i’m only used to using a skiving machine, you just feed the leather in and it does the work.

Our accident book at college was hilarious - we were constantly stabbing ourselves accidentally with clicking knives.

I tried to find you a folding hammer online, but no luck. A folding hammer doesn’t have a handle, it looks a bit like a dumbell, with a larger surface for hammering at one end and a smaller one at the other.

IP- you’re right on the skiving… depending on the materials your using, you could try a drumell and/or a belt-disc sander. Besides making the crease nice, you really want to just make the edge fall into space behind the crease and still have a nice edge.

Of course- a skiving machine would be optimal. As far as the hammer- try a leather goods store (most major cities have at least one), I can help out with one if you need it.