I was picking up some screws at Rona today and noticed that the designs of Hitachi are really extreme. Whereas the Black & Decker VXP tools posted here before have simple forms accented with linear graphic elements, these Hitachis have a kind of American Chopper meets Alien look. It’s fun to see such a contrast in an industry:

I got the hitachi drill for christmas 2006.

The design has a toy feel to it. It works well enough. No complaints there.

whoa, thats fugly! looks like oakley jumped in the back seat with h.r.geiger and 16V battery.

i honestly cant see anything good about that design. different, yes, but in terms of the drivers for a purchase (power, skill, professionalism, etc.) i can’t at all see how this relates to the consumer.

Try getting it for Christmas from your In-Laws and keeping a straight face while thinking exactly that!

Hitachi makes quality, professional tools, but it looks like each tool was designed by a different team. I like the break from the traditional power tool forms, but I wish they had more of a family look. Maybe its the dysfunctional family they’re going after.

While I do think they’re ugly as well, think of the target consumer for a minute. Most guys that are going to buy those pull up to Home Depot in an F-350 with a 30" lift, extra lights, and flames on the side with a big GIT-R-DONE sticker on the back.

They probably don’t drive Jetta’s, talk on an iPhone or blog daily about their thoughts about life… not that I don’t or anything.

hehe- very ugly design…but…I was so glad that Hitachi followed that design direction. They went so far out there that it made some of our “extreme” designs actually look reasonable. It gave us some breathing room visually. Before Hitachi came out with those tools, it was like pulling teeth convincing Marketing to be adventurous.

This is a good example of the ID not to the taste of the designer doing well. It is also a good example of cultural infusion because that design family is a distinctly Japanese power-tool aesthetic. If you see Ryobi, Panasonic and Makita tools from Japan, they all have the Geiger meets Power Rangers look.

I completely agree with the fugly opinion. The lines are very disjoint and non-related. Yet the drill won a 2005 IDEA award. Apparently it was inspired by shoe design. Somehow I dont see yo and gang designing something like this for Nike

Hitachi divides opinion. From my understanding the Hitachi move really made them memorable. Of course- the tools themselves are professional and don’t break promises. The situation is very close to the Z4- controversial design backed up with good performance.

So- I would never go there as a designer, but I am glad that they did, and that they are doing well. Sometimes gambles pay off.

Oh BTW- you have two generations, as well as the pneumatics, and AC mixed up in there, and that is why they look disjoint to a certain degree.

I think there was a post about the drill
awhile back after the IDEA award. If I
recall correctly, sales were great, marketers
kept bringing up that design.
Accounting for taste can be difficult,
but we CAN do it…right?

Nurb: Right on. I was surprised at how many people hopped on the, “whoa that’s ugly” bandwagon. I don’t like it either, but I think it’s a well executed design for a segment of the power tool market. I’m also assuming that they had to work around a fairly strict engineering package.

Looking at Makita here in NA, I was surprised by Hitachi. I would assume Hitachi would have a certain tranquil zen look, but these tools jumped out at me.

Masterblaster: Could you share more about who is having success and who is hurting in power tools?

Whoa, zen styled powertools, that sounds like something I would buy

As far as these go, I agree with NURB. Hitachi is probably selling more powertools than ever.

looks like the bottom of a really bad knock off sneaker.

yeah it does look like a bad shoe… i remember selling these things when they came out. (i worked at a big box home retailer) people’s opinions were all over the board, usually they either really liked it, or thought they were weird.

personally i don’t think you have to have a bunch of borax on a surface to make it look new or interesting. two examples of this would be hilti and Festool. both companies with beautiful innovative powertools, without going over-board on unnecesary surface-detail. (i can’t beat the power-rangers analogy- its spot on) 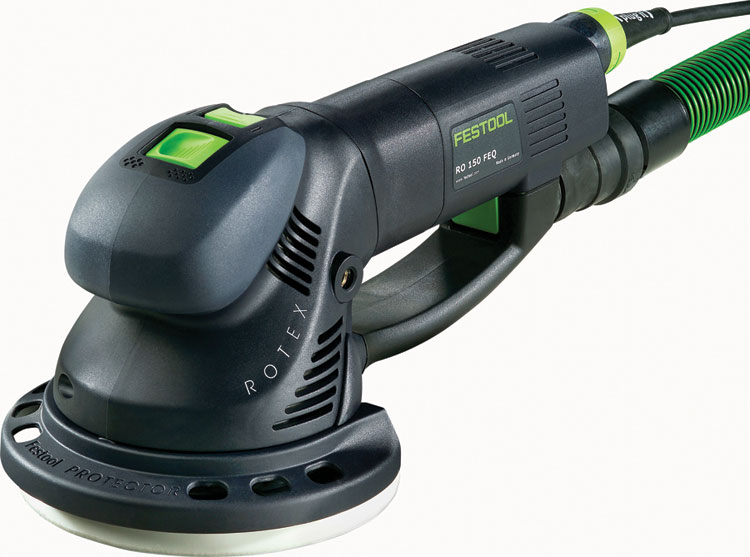 Most designers I talked to when this language came out, and further
evidenced by most of the comments here, think it’s “fugly” to use the
phrase of the day. It seems most of us would not have brought this
product to market, which feels justified when we talk to each other, BUT
from what I heard the sales were really good. And JGray suggests it
was a very polarizing design in his experience as a saleperson.

Are we all that disconnected from the consumers?
Would we better understand it if we did the market research, and is
that how this result was reached?
Who is buying this product, (market segment)

IDiot: I feel the same way. A design can be successful without meeting our taste. I know that I’ve designed products that I didn’t like, but I understood the consumer would.

jgray: There was an article in Innovation last year by a designer who argued that we should push for the concept that people either love or hate, rather the one that no one hates. I think Hitachi hit that nail in the head. The person who wants a generic drill already has 5 choices, but the guy that wants a Geiger drill only has one choice. Which design team was better?

I dont think we’re disconnected from the user.
A contractor in a tool-store is a child in a toy-store. (so is a bussinesswoman in a shoe store, and a climber at REI)

My understanding is when a sonsumer sees a product like the hitachi drill, certain associations are made (weather or not they realize it).
footware - rugged , toy - fun , powerrangers - japanese power… i don’t know…

my beef is that i don’t beleive this is what design is for. If it were i would put the mudflap chick on my cordless drill and outsell everyone(sarcastic).

i don’t mean to stick my nose up, but really, design of products is not a marketing tool.


Mr 914: Oh yeah… a bold design can pop you out of the crowd. But i think this model is used more appropriately in lifestyle\fashion products. Moreso than utility\tool products. - I suppose the idea can work anywhere though no?

Oh yeah… a bold design can pop you out of the crowd. But i think this model is used more appropriately in lifestyle\fashion products. Moreso than utility\tool products.

Is this the function before form argument?

I haven’t used the Hitachi products, but they look equally ergonomic, comfortable and easy to use as the next tool down the line. It just makes the user feel more proud or cooler than the next contractor. I think that is a big part of design.

Also, what’s wrong with using design for marketing? Isn’t that what Apple and Nike do? We just happen to like that design, so it’s better.