Over at VTEC.net they have photos that were accidentally released of the new Euro Honda Civic 5-door.

Unfortunately, word is that we north Americans get the overweight sedan and coupe instead:(

Hey nice Murano…uuuuh… I meant Civic… and that Mercury Sable light-up front really rocks! It looks a bit Accordish, which keeps it in the family.

sure its a pastiche of a lot of other cars, so is every other Honda ever…

…doesn’t stop me from wanting one of these, any chance for grey market impotation?

Very Murano like, but that doesn’t mean its not working for it. I think they could make a few changes, such as the front fascia and rear glass, to get resonably away from any Nissan association.

yo, there are ways to get cars grey market imported. I’ve heard of several sucessful importations of Lotus Elises before they were officially sold here. A lot of trouble for sure, but might be worth it if you have the money and time to spare. 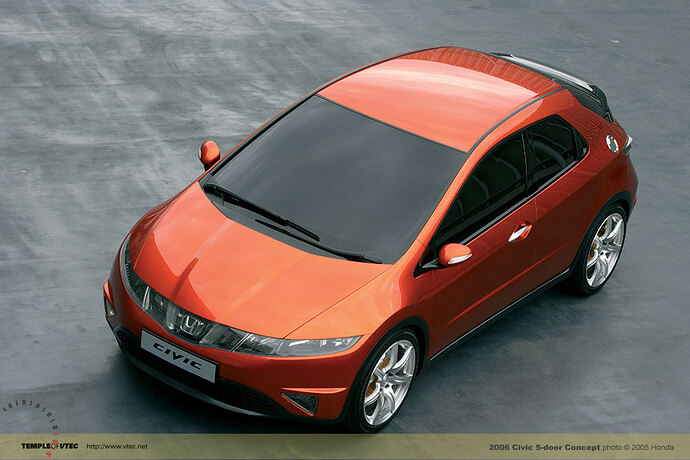 Of all the cars we have noted for being a little too “inspired” by others, I think this Civic might deserve it least. The fronts look similar, but the treatments are different. Honda uses long thin lights with a clear plastic in between. Nissan is using upright lights with a big chrome grille in between. The bumpers are much more alike, but they are also similar to 75% of the cars made, so that may be uninspired, but not a rip off per se.

Along the side the Murano has a powerful crease near its beltline that curves up under the headlights, flows through the entire body and sweeps down at the rear, defining the rear taillights. The Civic is more wedgy. It’s crease pulls tight around the cars waist.

The greenhouse is different at the rear. The Nissan sweeping up, the Civic pinching itself down.

Finally at the rear, the Civic repeats its use of a full length light cover, echoing Hondas other vehicles, like the Euro Accord/TSX, with narrow tail lights. And, the weird hatch glass. Nissans tail lights are skinny and upright. In between, they use the metal ofthe tail to define a nice place for a logo.

I think the Civic is much more inspired from '80’s Japanese concepts than the Murano.

Hmm. I’m not a fan of the Honda.
I can’t see why anyone would import one when they could get a Aplha Romeo ‘Brera’ instead.

…dude, I was just kidding.
take it easy.

I;ve been trying to dig up pics of the ‘will vs’ car from japan, but the murano is a design knock off of it.

Interesting evolution of the “boat tail”…

and just for the hell uv it…